The state bird of Minnesota is the mosquito (gyuck gyuck, ya workin’ hard or hardly workin’? Oh, ja, I’m on my way up to da cabin, gooo Vikes, I think Governor Carlson is good at reachin’ across dat dere aisle, ja?).

The state bird of North Dakota for most of the past fifty years was the B52 Stratofortress, known to its crews and neighbors as the “BUFF” (Big Ugly Fat, er Felllow) or “BMF” (Big Motor Scooter).

And it was fifty years ago today that the last BUFF came off the assembly line.

It’s been the same pool of B52’s that’s been modified to meet every strategic whim – from high-level nuclear bomber,

A B52 on strategic deterrent duty in the seventies, with a pair of Hound Dog standoff nuclear missiles.

to counterinsurgency saturation-bomber over Vietnam…: 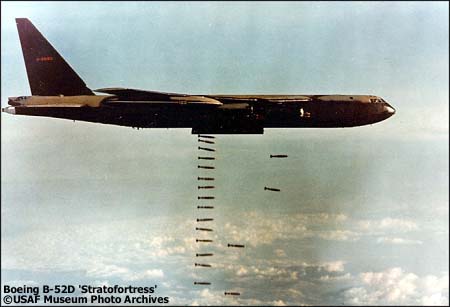 A B52H loaded with cruise missiles, on deterrent duty at Minot Air Force Base, May 15, 1985

To…well, whatever is around the corner. The B52 is getting refitted for duty until at least 2040 – nearly 100 years from when its design requirements were issued. It’s hard to believe that it’s likely the B52 will have been in service for 100 years by the time the last one leaves service, at this rate. And it has to be one of the bigger bargains in the history of military procurement.

3 thoughts on “The Last BUFF”