Paul Krugman – who is to Nobel Prizes what John Kerry was to Vietnam – wants to prove that Ronald Reagan never did anything useful for the economy, and he doesn’t care how sharply he has to shave the facts and the historical context to do it:

Reagan did not start an era of unprecedented growth by any measure: employment, GDP, productivity, whatever. But maybe the easiest way to see what didn’t happen is to look at median family income in constant dollars:

The NYTimes helpfully provided a graph: 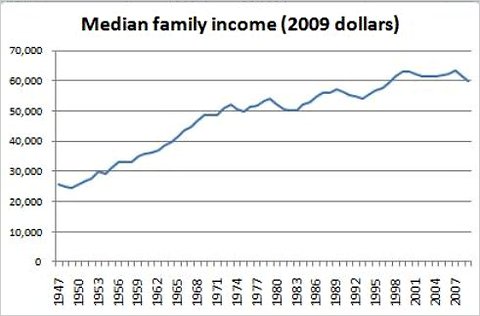 A spectacular increase during the high-tax, strong-union postwar generation; fitful improvement since, with the only sustained rise during the Clinton years. That’s the story; it’s amazing how many people don’t know it.

“That’s the story” Krugman says; high taxes (and unions, he adds in a non-sequitur) cause prosperity.

Like household income exists in a vacuum, affected only by taxes (and union membership).

I’m tempted to drive to New York, collar Krugman, and ask “what else happened during this timeline?”

What else happened between 1947 and 1971, besides unfettered taxes and government growth?  Like, the German and Japanese economies starting the period in ruins, and spending the entire period rebuilding?  China and India starting as third-world countries, enduring forty years of socialist governments that couldn’t feed their own people?  And,  respectively, a mass-murdering socialist dictatorship and civil wars?

Did Germany and Japan only get their economies rebuilt, and start to seriously compete with the US, in the late sixties and early seventies – about the time America’s rise in income leveled off?

Did America’s unions develop their high-salary, high-benefit, often low-skill paradigm perhaps because America’s economy had no competition?  The whole world was America’s market for those 25 years!

(And when Germany and Japan’s economies took off, they adopted high-tax, high-“service”, strong-union systems.  And when did their performance start levelling off?

That’s right, it shot up like a rocket from reconstruction until 1990…

…until China and India and Taiwan and the Republic of Korea started performing.

But don’t mind that.  According to “nobel-prize-winning” economist Paul Krugman, none of that matters.  Just taxes.

Media academics:  Distrust, then verify. Then, usually, distrust some more.

Right.  And Clinton benefitted from cashing the “peace dividend” won during the low-tax, high-prosperity Reagan administration.  And while Bush presided over prosperity from 2003-2007, he suffered from the deflation of the tech bubble early in his administration (exacerbated by a terrorist attack some of you may remember, but which Krugman clearly does not) and, of course, the housing crash, neither of which had anything to do with Bush’s tax cuts.