Since we’re spending Saturday commemorating Minnesotans who served in World War II, I’d be remiss as an American of Norwegian descent not mention one unit with a strong regional connection.

Early in the war, when Washington and London were casting about for ways to regain a foothold in Europe, occupied Norway was considered an option.

And one of the things the Army decided it needed was units of men who looked and spoke Norwegian, to go into Norway to mobilize guerillas to prepare the way for an invasion force.

Which led to the formation of the 99th Infantry Battalion (Separate) – a unit of Norwegian-speaking ski troops formed in Minnesota from first-and-second-generation Norwegians from Minnesota, the Dakotas, Wisconsin, and the Upper Peninsula of Michigan:

[…On] 10 July 1942, the 99th Infantry Battalion (Separate) was ordered formed by H.Q. Army Ground Forces. The men needed to be able to blend perfectly into the local Norwegian countryside, so requests for Norwegian speaking volunteers were sent throughout the army.  Native speakers were preferred but Americans of Norwegian descent who were fluent in the language were also accepted. Efforts were made to recruit Norwegians stranded in America by the war, and it was hoped that many tough Norwegian merchant seamen would enlist. All volunteers had to be citizens of the United States or must have applied for citizenship.
As might be expected, many of the men who volunteered came from Minnesota and the Dakotas.  Those accepted were ordered to report to Camp Ripley, where the Battalion’s first morning reports were filed on 15 August 1942. The unit’s first commander was Captain Harold D. Hanson, and it had an authorized strength of 884. Officers were to be Norwegian-Americans until native Norwegian officers could be graduated from officer candidate schools.

At Camp Ripley the unit engaged in enhanced soldier skill training and physical conditioning.
Training went well until all the units tents were collapsed under an unseasonal mid-September snowfall that was very wet, heavy, and deep.  Realizing that the training would be hampered at Camp Ripley, Captain Hanson moved his unit to Ft. Snelling. The battalion’s motor officer, Lt. Lester Carlson from southern Minnesota, had contacts with the State Highway Patrol and was able to make special convoy arrangements for a non-stop motor march to Ft. Snelling.  At Ft. Snelling the battalion continued the training started at Camp Ripley–physical conditioning, long road marches, enhanced soldier skills, and Norwegian language classes. The Twin Cities’ large Scandinavian population made sure that the men were well cared for, and many social events were organized to entertain the men when off duty.

Although they were an infantry unit, their mission was not unlike that of the US Special Forces, formed ten years later; infiltrate the target country, using guile and cultural and language skills, and serve as a trained nucleus around which guerrilla groups could form, to prepare the way for a possible Allied invasion.

On 17 December the battalion was transferred to Camp Hale, Colorado. Getting off the train and realizing that the snow was 6 feet deep, many soldiers wondered what they had really gotten themselves into. They soon found out. Carrying equipment weighing up to 90 pounds, the unit spent much of the winter training in the mountains on skies and snowshoes, and developing winter survival skills. In the spring when the snow melted the men received extensive rock climbing training.

But war’s exigencies being what they were, the 99th was reassigned as a regular line infantry battalion when the powers that be pointed the invasion at Normandy rather than Norway.  The 99th went on to fight in Normandy, and then participated in one of the key actions in the brutal Ardennes campaign, fighting against the best the Nazis had:

The battalion saw its heaviest combat in the Battle of the Bulge, when it was reinforced with tank destroyers and armored infantry and sent to hold Malmedy against [Nazi commando leader Otto] Skorzeny’s 150th Panzer Brigade. “They were good,” Private Howard R. Bergen recalled later, “but not good enough.”

The Norwegians smashed the SS attack, and held the crossroads for most of January before being sent back to France for re-training as part of the 474th Infantry Regiment, a unit made up of the 1st Special Service Force (the so-called Devil’s Brigade) [from which the US Army Special Forces – the  “Green Berets” – are indirectly descended].

After the end of the war, they finally served in Norway, helping move demobilized German troops back across the Baltic to Germany and serving as King Haakon’s guard until a Norwegian native guard force could be formed. 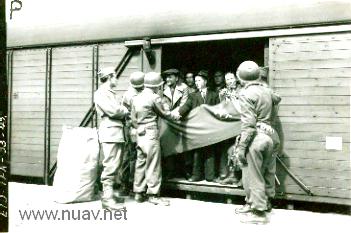 The unit, 880-odd men strong as it shipped out, suffered 300 dead and seriously wounded during the war.

I hope some of them show up on Saturday.