Every so often, America’s attention is drawn to small groups of men who very sincerely don’t want attention drawn to them.

US Navy SEALs fast-roping onto a carrier

The latest example – and, counterintuitively, one of the most spectacular examples in history – was the May raid by special forces, publicly credited to the Navy SEALS, that killed Osama Bin Laden.   There’ve been other examples; the long patient waiting game in the Arabian Sea last year that led to three simultaneous sniper shots killing three pirates; the rescue of kidnapped British missionaries in Iraq…

…and, going back a few years, the rescue of passengers from a Lufthansa airliner in Somalia (killing the terrorists, rescuing the passengers), and the rescue of dozens of hostages from the Iranian Embassy in London, after the terrorists had actually started killing hostages.   Other missions – Entebbe, Mogadishu, and even Desert One – are household phrases among people who watch these things.

In every case, the missions were carried out by groups of men that their respective governments denied existed – indeed, actively deceived their publics about; for starters, “SEAL Team Six”, which the media credited with the Bin Laden raid, doesn’t actually exist, and hasn’t in decades (either does “Delta Force”, although the unit it refers to most certainly does).

These weren’t “just” “commandos” – whose debut, seventy years ago earlier this year, we covered – units like the Rangers, the Royal Marine Commandos and other units whose specialty was sneaking up on the enemy and then wreaking untrammeled mayhem.  These were units that combined the determined brawn of the commando and the paratrooper with a subtle precision that was, to those used to the mayhem of an infantry or tank attack, unusual for the military.

It was seventy years ago today that a British infantry captain, David Stirling, founded a small unit of men intended to launch focused, pin-prick but devastating raids deep behind German/Italian lines in Libya – indeed, a unit whose intention was to make “lines” irrelevant.  Some staff officer christened the unit the “Special Air Service”, to throw off German intelligence.  The name stuck.

Col. Stirling and an SAS

The SAS was formed for some of the same reasons as the Commandos – but with a different approach to a mission.  Where the Commandos, and the American “Ranger” units they spun off,  sought to descend on a target by surprise and with overwhelming force and inflict immense mayhem, the SAS was different; working in generally in groups of two to sixteen men, they’d slip in by parachute, or by heavily-modified Jeeps, deep into enemy territory and operate for long periods; sometimes to sabotage enemy airfields and bridges; others, to assassinate enemy officers or collaborationist politicians; others still, to scout targets for bombing raids; other times, to support and create resistance groups among locals deep in enemy territory. 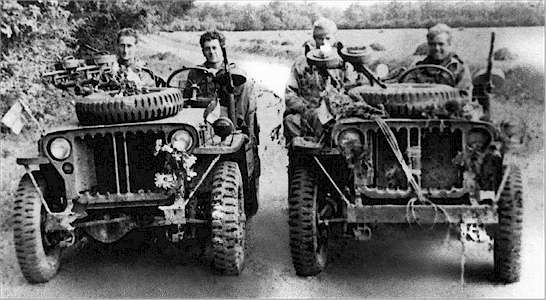 A pair of wartime SAS jeeps. Armed with machine guns intended for air-to-air usage, they were very difficult to aim - but at the range they were used at, aim was superfluous.

The men selected were, above all, tough.  Not “strong”, as such, but men who were wired to go to any length, even death, before accepting failure.   They were trained to a razors edge; experts at stealth, fieldcraft, camouflage, combat demolitions, communications and the blocking and tackling of close-in infantry combat, they were drawn from the hardest men in the British empire; Cockney scouses, New Zealander farmers, highlanders, career soldiers who’d become bored with the lockstep to-and-fro of regular army life.

How tough were they?  One patrol of four men, whose jeeps were knocked out, walked 100 miles through the Libyan desert to get to safety – with a two-gallon can of water.

How trained were they?  One man, carrying a truckload of captured Italian mines, heard the sound of a detonator arming itself, and dove instinctively from the truck just before it blew up.

How successful were they?  Hitler himself, after enduring SAS raids in North Africa, the Adriatic and Italy as well as  in France (where SAS patrols linked up with the French Maquis resistance in the Vosges mountains and created a resistance movement that essentially denied the area to the Germans for nearly a year until liberation came), ordered captured SAS men to be turned directly over to the Gestapo, and then executed.

By the end of the war, the SAS comprised five battalions – two of them French, and one of them Belgian.  Both countries’ current special forces units trace their lineage to those units.

French SAS troopers in a village in the Vosges mountains.

As, of course, does the current SAS, the British Army’s premiere special operations unit.

It is, of course, the armchair colonel’s most self-indulgent exercise to speculate who is “the best special forces unit”, especially given that any unit that doesn’t believe that it’s the best is probably not fit to fight.

But it’s worth noting that as we enter the second decade of a War on Terror that has put immense loads on the western world’s Special Forces – the men that can do the seemingly impossible – the number of units that trace their lineage directly back to World War II.

But the first, and perhaps the most influential, and that one that brought all those threads together, was the SAS.   The unit fought throughout the war, was disbanded in 1945 but reformed in 1947, and has been the west’s leading “black bag” unit ever since. 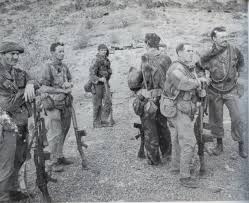 SAS troopers in Aden - now called Yemen - in the sixties, in the midst of a very hot war.

A young American exchange officer, Charles Beckwith, used his experience with the unit as a template for the unit that became known as “Delta”, which serves the same role for the US Joint Special Operations Command today.

Are they Deltas? Are they even Americans? Nobody's supposed to know. But this is supposedly a sanitized photo of "Delta" operators in Afghanistan.

The British Marines’ equivalent of the SAS, the “Special Boat Service”, which spun off from the SAS during the missions to support Greek and Yugoslav rebels during the war, became (along with the US Navy’s “Frogmen”, close-recon and demolitions experts in their own right) the model for the US Navy SEALs.

SAS troopers assault the Iranian Embassy in London in 1980. Terrorists had begun killing hostages; the SAS pulled off the rescue.

…along with the Israelis, of course, whose elite unit, Sayaret Matkal, which carried out the Entebbe raid, is modeled on the SAS, and with whom it shares its’ motto, “Who Dares Wins”.

It’s the bleeding edge of warfare as it’s practiced today, spinning together the most rarified strands of intelligence and soldiering – and it started seventy years ago today in the Libyan desert.

8 thoughts on “The Unit”