The Fifth Circuit Court of Appeals says — no mandate for you:

A federal appeals court has upheld its stay on President Biden’s vaccine-or-test mandate for companies with at least 100 employees.

In a 22-page ruling on Friday, the 5th U.S. Circuit Court of Appeals said the mandate was “fatally flawed,” and barred the Occupational Safety and Health Administration (OSHA) from enforcing the mandate “pending adequate judicial review” of a motion for permanent injunction.

OSHA shall “take no steps to implement or enforce the mandate until further court order,” the ruling stated.

The mandate, which was supposed to take effect Jan. 4, requires business with at least 100 employees to mandate their workers get vaccinated or undergo frequent testing.

This blog was founded primarily to lend my small, relatively insignificant voice to pointing out the growing bias and ethical turpitude the mainstream media.

That was in 2002 – a much more innocent time, relatively speaking.

As we’ve documented the proceedings in the Rittenhouse trial, I’ve noted the scabrous, depraved slant in the coverage.

Someone actually put ’em in the same place:

Local media is no better; most ran headlines similar to the above during Monday’s proceedings – only Channel 11 made a quick headline reference to the fact that Grosskreutz incriminated himself and upheld Rittenhouses self-defense claim against him (without saying it in as many words, naturallly).

Public media? NPR and MPR this morning ran a report from Wisconsin Public Radio about yesterday’s proceedings that focused on a dispute over whether the owner of the used car lot where the incident started did or did not pay, or even ask, civilians to provide security – which will have no impact on the verdict, other than perhaps gulling any potentially dim jurors…

I tend to give people the benefit of a doubt. Reporters aren’t largely lawyers. Many of them aren’t curious enough to go much past the press releases that seem to make up so much of one’s morning newscast.

But this goes way past ignorance, and given the amount of reliable information that is available, incompetence as well.

To the narrative, the battle is a reductionist cartoon with white hats on one side and MAGA caps on the other, counting on news consumers to be too dim to know the difference.

As the 2020 elections, the California recount, and the recent election in Austin Texas show, its not wrong.

NPR (I listen so you don’t have to) has a story on Paris’s crack problem – which, after a year of lockdown, has gone pretty public.

Near the end of the piece, the reporter reassures the NPR audience that at least there isn’t any gun violence, due to France’s strict gun controls.

Thing is, even in the US, guns and all, crack addicts rarely shoot each other. Oh, they sometimes use guns to rob people to get money and fence-able goods for their next fix – but the NPR piece doesn’t favor us with anybody sight as to how French baseheads pay for their buzz. Given hiw defenseless French Gun control, leaves citizens, there’s less need to use a gun to rob people, but again, the report goes into no details.

No, in the US it’s gangs, taking and defending turf and herding beeves, thst do the shooting. And it seems French gangs don’t have that much trouble getting guns.

There are just different priorities so far.

SCENE: A conference room at “Minnesotans for All Progressive Causes” – a non-profit group financed by progressives with deep pockets – for the weekly message coordination meeting.

CARROLL: (Looks at Silberman and Torstengaardsen and Phurphy, clears throat).

STOMBERG: Be seated. (All sit, with STROMBERG at the head of the table). Americans are rejecting the term “insurrection” to describe the January 6 riot. We need to come up with another term.

CARROLL: Love the energy, Mesme, but it might be a bit of an overreach.

TORSTENGAARDSEN: I mean, ‘riot’ pretty much sums it up.

SILBERMAN: So – a term that, outside a very thin film of political science and history academics, refers in American English solely to Hitler’s abortive 1922 Munich coup attempt?

(The three “journalists” look at each other)

SILBERMAN: I hear and obey.

STROMBERG: (abruptly rising) Make it so. (Leaves the room with CARROLL).

If government tells you something, distrust but verify. And then, usually, distrust some more.

If the media tells you something – at least, anything about an event that is especially socially fractious – distrust, and verify even harder. And, as always, usually wind up distrusting even more.

If any of Big Left’s social hangers on declares some thing with immense servitude? Distrust, verify, and, well, you know the drill.

Last week was the fifth anniversary of the Pulse nightclub shooting.

“Perish the thought, it couldn’t possibly have been a deranged man tied to and eliminationist sect of Islamism“, Big Media media assured us. “It was an anti-LGBTQ hate crime, nothing more, nothing less“.

Which is how the media and Biden administration have been treating it, over this past weekend

EDITOR: “Then it wasn’t violence”.

TEACHER: “Marco, can you gell us what the ‘Holocaust’ was?

PLAY BY PLAY ANNOUNCER: “Gascoigne checks O’Reilly into the boards…”

PLAY BY PLAY ANNOUNCER: “Aaaaand off come the gloves. We’ve got a donnybrook going here”

COLOR GUY: “Hockey used to be such an artistic game. How far hockey has fallen, since it’s first ever fight, last January 7”.

PLAY BY PLAY ANNOUNCER: “RIght you are, Guy”.

GUY A: “Who was that woman who got arrested here in Highland a few years back for being a terrorist?”

GAL B: “Sarah Jane Olson. She was arrested for being involved in January 6″.

GUY A: “I thought it was from in the Symbionese Liberation Army, back in the seventies?”

GAL B: “Couldn’t be. There was no political violence before January 6”

TOURIST:”Excuse me – will we see any monuments to the Battle of Stalingrad?”

TOUR GUIDE: “I don’t understand. There was no war or violence of any kind before January 6”.

KOMMISSAR (yelling from off-camera left (where else?)): “Or since!”

REPORTER: “Tell us why you moved people with Covid into nursing homes?”

WALZ: “It was January 6. It was responsible for everything“.

PROGRESSIVE EMPLOYEE: “After January 6, how could I?”

TEACHER: OK, Chad, what do the Gulf War, World War 2, World War 1, the Civil War, the War of the Roses, and the French Revolution have in common?

TEACHER: Besides being called wars.

TEACHER: None of them existed. Because there was no violence of any kind before January 6.

COP (PULLING WOMAN OVER): “Do you know how fast you were going, ma’am?”

WOMAN: “After January 6, does it even matter?”

CHILD OF PROGRESSIVE PARENTS: “After what happend January 6?”

As clubby, self-referential and solipsistic as the modern “elite” (and even not-so-elite) media is, I should have probably predicted we’d see scenes like this whenever Trump was on the brink of leaving office.

Never mind that “the Lightworker” Obama was did a whole lot more actual oppressing of “journos” than Trump.

No. To these coddled hamsters…:

…covering Trump was up there with going ashore with the first wave on Omaha Beach, or like riding in a B24 with Charles Collingwood.

Which is a little ironic, given that The LIghtworker was, in fact, the most press-hostile President since Woodrow Wilson – and given the deep-state leaks with which the executive branch was riven, it would have been pointless for The Donald to even try to match Obama’s record.

Fresh from victory against CNN, Nick Sandman’s attorneys are widening their scope:

Sandmann’s lawyers submitted a status report with the U.S. District Court in Covington last week that showed that “they intend to file complaints against Gannett, ABC, CBS, The New York Times and Rolling Stone before March 9,” Fox 19

And thinking of all the institutions in our society that we just can’t trust…:

…and, of course, our news media, is one of the more sobering exercises when one wonders what the future of our republic is going to be. 

Last week, I was listening to NPR.

I can’t find it online – I didn’t try all that hard, but then I suspect it’s not the only piece like this. that’s going to turn up if you look hard enough.

“We don’t want to politicize the border and immigration issue . We just want policy to reflect the changing patterns of migration”

In other words: we want “ignore the national boundary so that people can migrate north to join our power base” to become the new normal.

Oddly, the NPR host said nothing about this.

And he didn’t just make up the little stuff. Two local residents combed through the story:

There are so many lies here, that my friend Jake and I had to narrow them down to top 11 most absurd lies (we couldn’t do just 10) for the purpose of this article. We’ve been working on it since the article came out in spring of 2017, but had to set it aside to attend to our lives (raising a family, managing a nonprofit organization, etc.) before coming back to it this fall, and finally wrapped things up a few weeks ago, just in time to hear today that Relotius was fired when he was exposed for fabricating many of his articles.

The following was neither the dumbest nor the most extravagant of Relotius’ lies:

6. The view from the Viking Cafe
“You can see the power plant where he works when you look out the window of the Diner, six tall, gray towers, from which rise white steam clouds.”
The Viking Cafe is Fergus Falls’ most treasured downtown establishment — over 60 years old. One of the reasons we Minnesotans all like it so much is that it has a cozy, underground feeling. Why? Because there are literally NO WINDOWS in the interior of this restaurant. Sure, you can see a little bit out the small front windows, but nothing beyond the shops across the street. The power plant Relotius refers to is almost 2 miles away on the northeast edge of town, blocked from view by a neighborhood on a large hill, and sports a single smokestack. Relotius’ imaginings are dramatic for the movie version of Trump’s America someday, but is it accurate and true? Not in the least.

Further proof that if you read it in the mainstream media, and it’s even a little bit political, distrust first. Then verify.

Then, almost invariably, distrust some more.

So, a group of black men video a Chipotle manager refusing service to them. Video goes viral. Good Morning America is all over it. Manager fired. 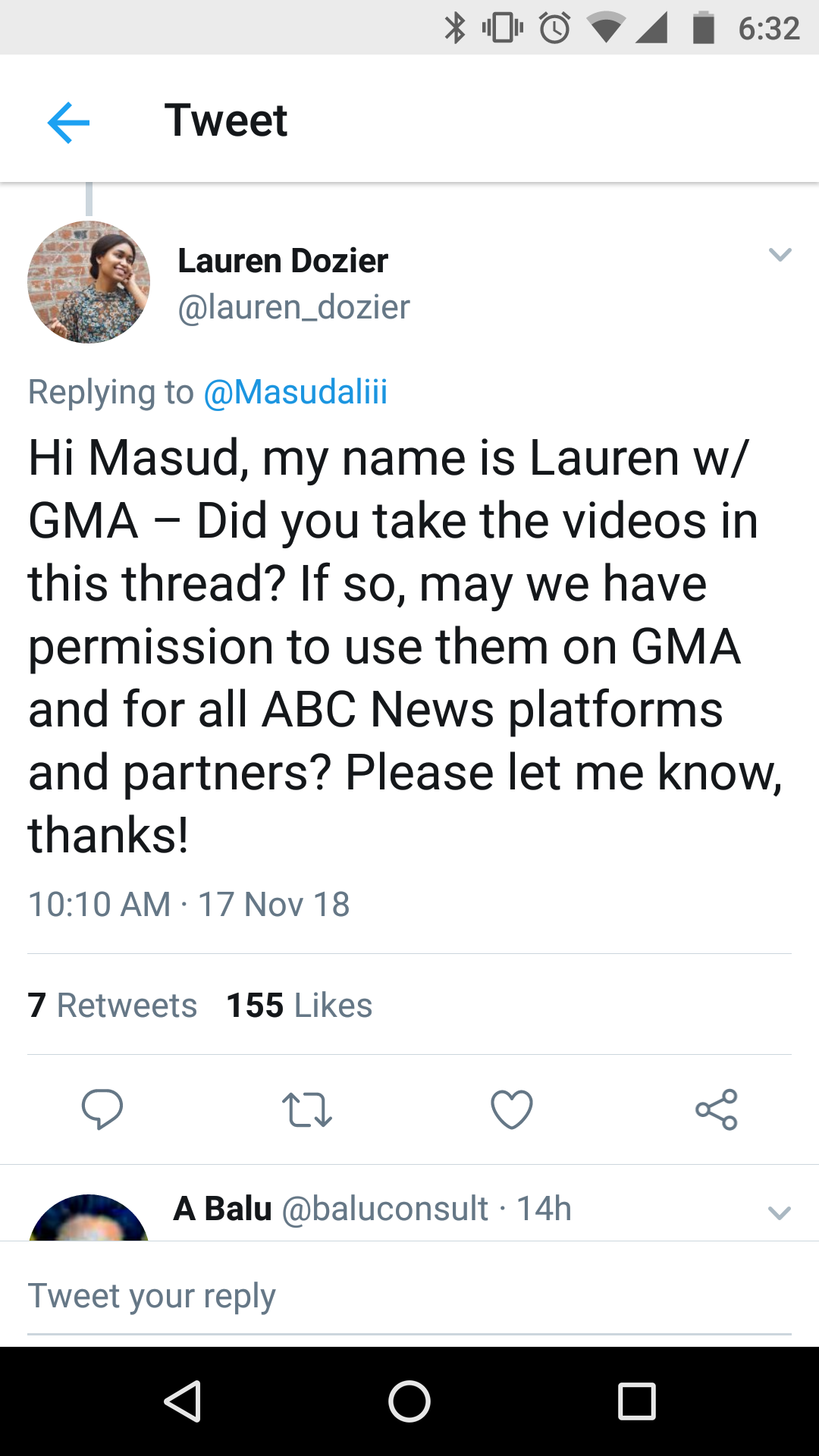 Except, we find out these guys dine and dash all the time. Brag about it on Twitter…

I don't think people are ready for the crisis that will follow if Democrats win the House popular vote but not the majority.

After Kavanaugh, Trump, Garland, Citizens United, Bush v. Gore, etc, the party is on the edge of losing faith in the system (and reasonably so).

NBC’s Chuck Todd on Sen. Grassley’s referral of Julie Swetnick and her “teenage rape gang” story to the FBI:

Was this an intentional attempt to mislead our reporters? Evidence points that way… https://t.co/MOxE8WiGK4

Mr. Todd: Isn’t it your job to figure that out?

Perhaps – radical thought, here – before you run the story?

It’s that time of election season when everyone who, for any reason or no reason at all decides not to vote Republican will get their Warhol – mandated 15 minutes of fame.

Is it a “gun owner” “resisting tthe NRA? Is it an evangelical congregation where a few members have broken with conservatism?

Or is it a republican “Leader” with impeccable moderate credentials of whom nobody has heard for 10 years, loudly and theatrically leaving the party?

Belly up to the media bar!

The only faster way to become a household name (for 15 minutes) is to be an exceptionally obscure “Republican” with an outlandish view on something. For 15 minutes, you will be more famous than Justin Bieber.

Glad we could settle that.