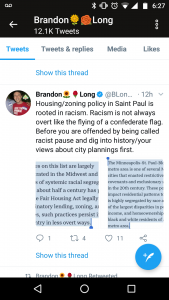 He, and other young progressives, cry about lack of affordability (for some other group of unknown people), while they live in their single family homes in Mac Groveland or Highland Park (as is the case for this director.) Thinking about affordability, I wonder how these young, just out of college people afford their houses in neighborhoods like Mac Groveland or Highland Park. Thinking about racism, I wonder why these young, privileged white people chose those neighborhoods instead of the more transit connected, affordable neighborhoods in the city…

Urban Progressive Privilege – when nobody who matters in your social and vocation circle will ever call you on “inconsistencies” like this.

I’ve found that the correlation between these young non-profiteers and old Saint-Paul-DFL money is really, really high.