Kevin Williamson came out with an excellent piece this past week, comparing transit policy to “progressive” policy on education (and, for that matter, firearms, although Williamson doesn’t connect the Second Amendment to his thesis.  Which is fine – that’s what I’m here for).  Our current school and transit systems are largely designed by the “haves” – people with power as much as money – to foist upon the “have nots”.  That’s why superhighways and transit lines always run through lower-income, usually ethnic neighborhoods – and why schools in minority areas are disproportionally awful.

Transit – like education – is sort of a “powerful person’s burden”.

Along those same lines, a neighbor emailed me some observations about some of our local potentates rolling up their sleeves (and pant cuffs) to take to the frozen streets by bus to…well, hit the taxpayer up to fill in the money pit a little more:

I happened to see on Twitter that some legislators are using transit this week. Said one, “transit users are less stressed.” He’s not interacting with the same transit passengers that I interact with!

On their tweets, they all look a bit too happy to be real transit riders, too. They definitely aren’t interacting with the people on the bus at all, or they wouldn’t be smiling. Like the Pulp song “Common People” that I learned about after William Shatner covered it- “I said pretend you’ve got no money, She just laughed and said, “Oh you’re so funny.” I said “Yeah? Well I can’t see anyone else smiling in here.”

For fun and games, see tweets with hashtag howweroll.

It reminds me of those pix of Senators Franken and Klobuchar, and Congresspeople McCollum and Ellison, and Representative Martens, riding the train… 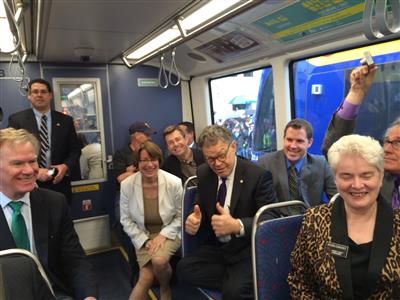 …back on that long, slow opening day last June, looking all Jane Goodall “Peasants in the Mist”, smiling like they’re worried Kim Jong Il (or Greta Bergstrom, pardon the redundancy) are going to feed them to hungry dogs if they don’t smile hard enough.