The last spent cartridge casing had barely pinged off the ground when the ghouls of Minnesota’s “Safe Criminals” movement came streaking out of the shadows to rip the bloody shirts off the (ahem) victims of an ISIS terror attack to try to jam their agenda down our throats.

Kim Norton – fresh from utter failure in the legislature, and apparently on her way to a fat, cushy job with a pro-murderer-safety non-profit:

So yes, Kim Norton – take a moment to stop gorging yourself on the blood of innocent victims and do some re-thinking.   Please.

Of course, Kim Norton is a gun-grabbing ninny because she gets paid for it (or will be, soon).    Rabbi Latz – apparently the brother of Senator Ron “I Went To Harvard, Don’t You Know” Latz – tweeted in response to a local human rights advocate who pointed out exactly what I pointed out to Rep. Norton, above: 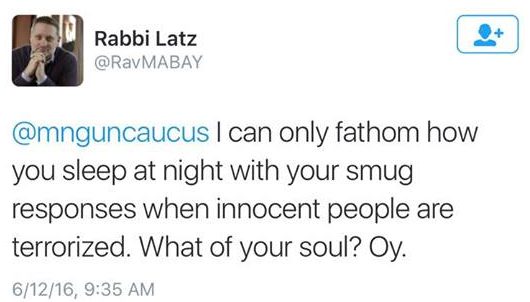 That Latz, rabbi at a “progressive” congregation in Saint Louis Park (who was in the process of dislocating his spine while bending over backwards to pin this atrocity on gun owners, rather than an ISIS terrorist) is in mid “smug response” with this tweet is the sort of inevitability that you learn to accept when dealing with orcs and the gun issue.

That a liberal rabbi, in the midst of a smug, know-nothing dismissal, tries to invoke the dissenter’s soul is purely loathsome.  The “Rabbi” is a blot on his calling.

Later, when I called him on his lack of command of the facts, he sniveled:

“Rabbi” Latz is a thug and a wanna-be bully for abusing his ecclesiastical position to support a political agenda (an agenda I believe, and can prove, to be morally retarded, but that’s really irrelevant to the issue at hand – thuggish bulliness).   I may not “have all the answers” – but despite the fact that he has none, he not only trumpets his ignorance, but wraps it in unearned self-righteousness.

There may be few people in politics I respect less than “progressive” clergy.

18 thoughts on “Lie First, Lie Always: And Out Come The Ghouls”