Minnesota’s official line is that we’re very, very proud of the fact that more of our people jam into the polls on election day than any other state.

So I thought – why not take a look at some previous years? 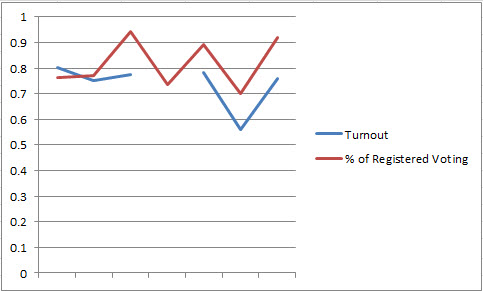 The red line is the percentage of registered voters that vote.  It doesn’t seem counter intuitive; people who are registered to vote (and the numbers in every case are the “Registered as of 7AM on election day” numbers) are more likely to actually get down to the polls and pull the trigger.

Obvious pattern #1:  Presidential years are bigger for both figures.

But Monday, let’s look into where some of these numbers come from.

16 thoughts on “Numbers, Part I: Lots Of Voters, Indeed”