In the days since the Paris Charlie Hebdo and Jewish Deli massacres, it’s become fashionable in media circles to say, in one language or another, “I Am Charlie Hebdo”.

The French paper was sort of like the American satirical institution South Park – with an unhealthy dose of that traditional drug of the European idle elite, mindless and often nihilistic pseudointellectualism.   And among that class’ fatal conceits in the days since the massacre is the idea that free speech will win out over terror. 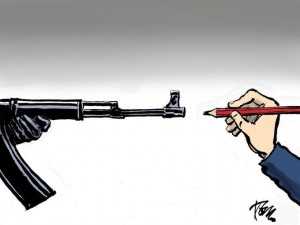 Freedom and individual liberty can, and must, win over terror; “The pen is mightier than the sword” could only have been written by someone who never had to bet his life, and certainly not his family’s lives, on it.

Against civil, political opponents, speech is fine; against those who’d kill you, our freedoms need a more aggressive, tangible defense.

But Charlie Hebdo was not the criminals; the terrorists were.

Along with big media outlets like the AP and the NYTimes, I’ve been asked why I don’t run Charlie Hebdo’s cartoons.  Unlike the AP and the Times, I’m not a hypocrite – I don’t get any particular kick out of offending peaceful, law-abiding members of any faith just because I can.  Most Muslims, especially in America, want nothing to do with violent Shi’ite or Wahhabi extremism; I feel no need to piddle on their faith to stick it to terrorists…

…especially because my “beat” in Minnesota, and we have plenty of thin-skinned personality cultists in this state who don’t take satire well: …a good guy, or gal, with a gun; uniform optional and, in extremis, not strictly necessary.

Satire is many things; it is not bulletproof.

4 thoughts on “Pick Your Battles”