I’m continuing my five-part series going over “Protect” Minnesota’s press release on the Self-Defense Reform and Constitutional Carry bills, which were introduced last week in the House.

But first, a quick aside.

Records:  While the criminal-safety  movement would like you to think otherwise, gun violence is neither generally random nor unpredictable.  Our violent crime rate – which has been dropping for two decades – is not evenly distributed across the population.

I’m not referring to geography here – although the numbers also manifest geographically.

Ethnicity, either, for those of you who are inclined to see racial dog-whistles in all conservative writing.

But it’s a simple fact that if a person gets to age 21 without a violent felony record – whether they’re from rural Kentucky or downtown Baltimore – the odds are pretty good they will go through their entire life without one.

And the vast, vast majority of firearm crimes involve people with records of violent and serious property crime, either as perps, victims, or both.  It’s exceedingly rare that someone of any race with a  pristine record vis a vis violent and property crime shoots someone.  (Mass shootings are usually an exception – but they are also a different  phenomenon and, notwithstanding the coverage they receive, are vastly rarer.  Also, they are overwhelmingly associated with places where victims are disarmed – but that’s another discussion).

This isn’t a tangent; it’ll come back up.

A man walks out of a bank.  He’s carrying a sawed-off shotgun (a violation of federal law) and a bag of cash.

A policeman rolls up.  A policewoman jumps out and, taking cover behind her car, yells “Show me a your carry permit!”

That sounds absurd, doesn’t it?  It is, of course.  There’s a crime underway.  The subject’s paperwork is less relevant than the fact that they reasonably appear to be in the middle of committing a violent felony.

Here’s another scenario; a policeman sees a middle-aged black family man, with his wife and his kids, sitting outside a Dairy Queen across from Lake Josephine, drinking malts and talking about their day.   A passing police officer sees the imprint of the butt of a handgun under the man’s shirt.

It’s possible that the guy is carrying illegally – and the cop may well walk over to ask if the man has a permit (he does) and advise him to tuck in a little to avoid getting ninnies riled up.  But it’s pretty much a fact that middle aged family guys, Tony Soprano notwithstanding, generally aren’t gangsters on the warpath.

This discussion brings us to The Reverend Nord Bence’s next point (with emphasis added by me):

The permitless carry bill also represents a particular threat to law enforcement officers, who cannot possibly discern who is a “good guy with a gun” and who’s a “bad guy with a gun” during the few seconds they would have to respond to a lethal threat. 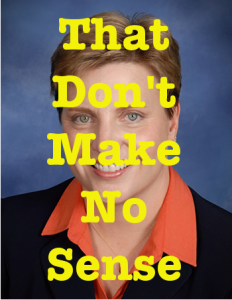 Does The Reverend Bence think carry permits are externally visible?

If the officer is facing a lethal threat – an immediate threat to their existence on this planet in this lifetime – permit status is irrelevant.  If you present someone with a legitimate fear of death or great bodily harm, the paperwork is irrelevant.

And not just if you’re a cop.   One of the criteria one must face to justify lethal force in self-defense as a civilian is a reasonable, immediate fear of death or great bodily harm.  If someone is waving a gun, a knife, a machete or a chainsaw at you, and a reasonable person – 12 of them, really – would agree that your life is in danger right now, then the law doesnt’ require  you to be a mind-reader, whether you wear a badge or not.

And if your fear is not reasonable, you are going to be in trouble – as Saint Anthony officer Geronimo Yanez is discovering to his chagrin in court, after allegedly panicking and shooting and killing Philando Castile, who was in fact a good guy with gun, and had a plastic card in his wallet  to prove it.

Yanez might be acquitted – he’s innocent until proven guilty – but it points the the fact that when the Reverend Nord Bence says:

If passed, this bill would force police officers to treat everyone they encounter as armed and dangerous.

…she is, as usual, talking through her ELCA hair.  Cops are always alert for danger, but behavior counts – and the consequences of misreading behavior are serious and irreversible for the shooter, whether it’s a cop or a civilian.  And even more so for the target.

A carry permit can, in theory, help a cop figure out who is and is not a law-abiding citizen, assuming there isn’t a violent encounter underway – something Nord Bence apparently hasn’t figured out.

Of course, all the information a cop needs to know about a citizen’s legal status is available with a call to their precinct, or a few keystrokes on the computer in their squad car, just as fast as checking the validity of a carry permit.

The Reverend Nord Bence may not know that – which is ignorant – or may know it but be trying to fool the ignorant, which is merely repellent.

28 thoughts on “The Gang That Couldn’t Not Shoot, Straight, Part III: That Golden Ticket!”