Minneapolis City Councilwoman Alondra Cano makes no bones about the fact that she’s a progressive.  Her Twitter bio begins “Daughter of the Third World Feminist movement”, which may or may not be true, but she’s certainly a product of the sort of unbridled prosperity that First World free-marketeering has wrought; it takes a lot of prosperity to make a public life like hers sustainable.  And thank goodness for that prosperity – since her future as an industrial engineer looks dim indeed.

At any rate, she spent a good chunk of yesterday on social media rooting for Black Lives Matter’s protest at the Mall of America.  And while Ms Cano seems as confused about the distinction between public and private property as the rest of the City Council usually does, I’ll certainly defend her right to protest in favor of or against anything she wants.

Provided, of course, she doesn’t abuse her office to do it.

And we’ve got a problem, there.

Chicago-y:  On her Twitter feed yesterday, she went around and around with some of her critics.

Including, as it happens, some who’d written to her on her City of Minneapolis feedback form – the one people use on the City website to send her feedback.

She took to posting some of the responses she disagreed with.  Note:  While I redacted personal information, including phone numbers, email addresses and home addresses, from the screenshots, Ms. Cano did not: 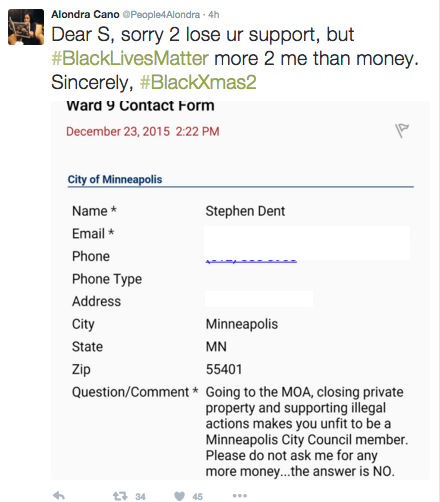 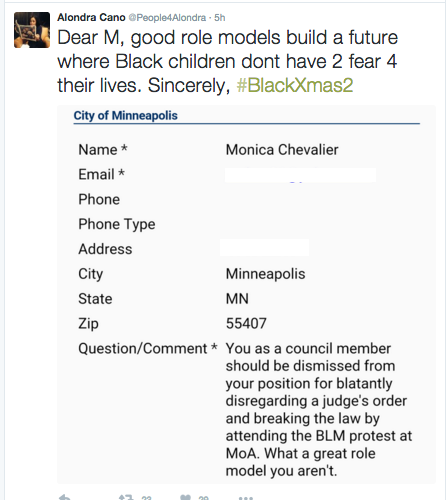 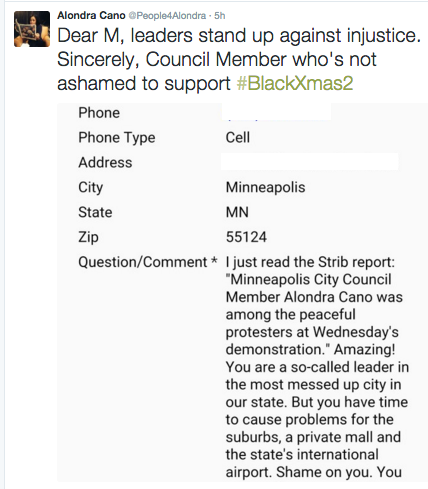 And this condescending little jape: 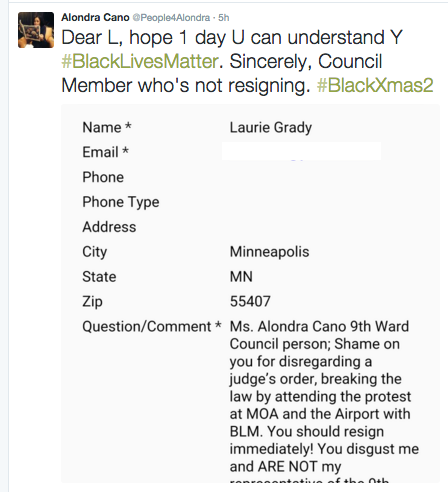 When people tried to call “foul” on Twitter, Cano responded:

Emails may be public – but one might ask why a public official is posting citizens data on Twitter, when they contacted her via the City’s contact form.  Because she expects them to be reading Twitter?  Seems unlikely.

And while she pleads “public data”, you’ll note that she only published the names, email and home addresses of detractors, not supporters.

In short, Cano used her city social media presence and city-supplied data to try to intimidate constituents who disagreed with her.  Furthermore, she used city-supplied data to stump for Black Lives Matter.  While Cano has every right to believe what she wants, and protest on their behalf, using data from a city web form to intimidate citizens is grossly inappropriate.

It’s hard out there for a member of a major urban political elite.

So while Ms. Cano – an elected officeholder and high-ranking member of a power structure that has boundless power over a major American city – may try to eke out a shard of victimhood out of the fact that anyone would ask…:

I haven’t seen the term “womyn” used unironically in twenty years. Minneapolis is truly a commemorative museum of progressivism.

I posted four questions to Ms. Cano – although I suspect I’ll be blocked from her Twitter feed long before she reads them, even if she did.  But for the record, here they are:

If you live in Minneapolis, I urge you to ask Ms. Cano exactly that.

And maybe tell her to check her urban liberal privilege.