I went down to the Capitol last night for a 6PM hearing on SF2639 – Senator Ron Latz’s bill to punish people accused but not convicted of domestic abuse by confiscating their guns and keeping them confiscated, innocence notwithstanding.

We started out on a high note; Michael Paymar’s attempt to create a felony trap for law-abiding gun owners in Capitol-complex buildings got turned into a fairly innocuous tweak to the existing notification law.  The law, by the way, dates to 1994, and is utterly obsolete, a relic of a time when law enforcement still kept records on paper files.  The notification law is obsolete and needs to be gutted and tossed entirely – but for now, it’s no big deal.

So I showed up at the Capitol.   As usual, I was among plenty of friends: 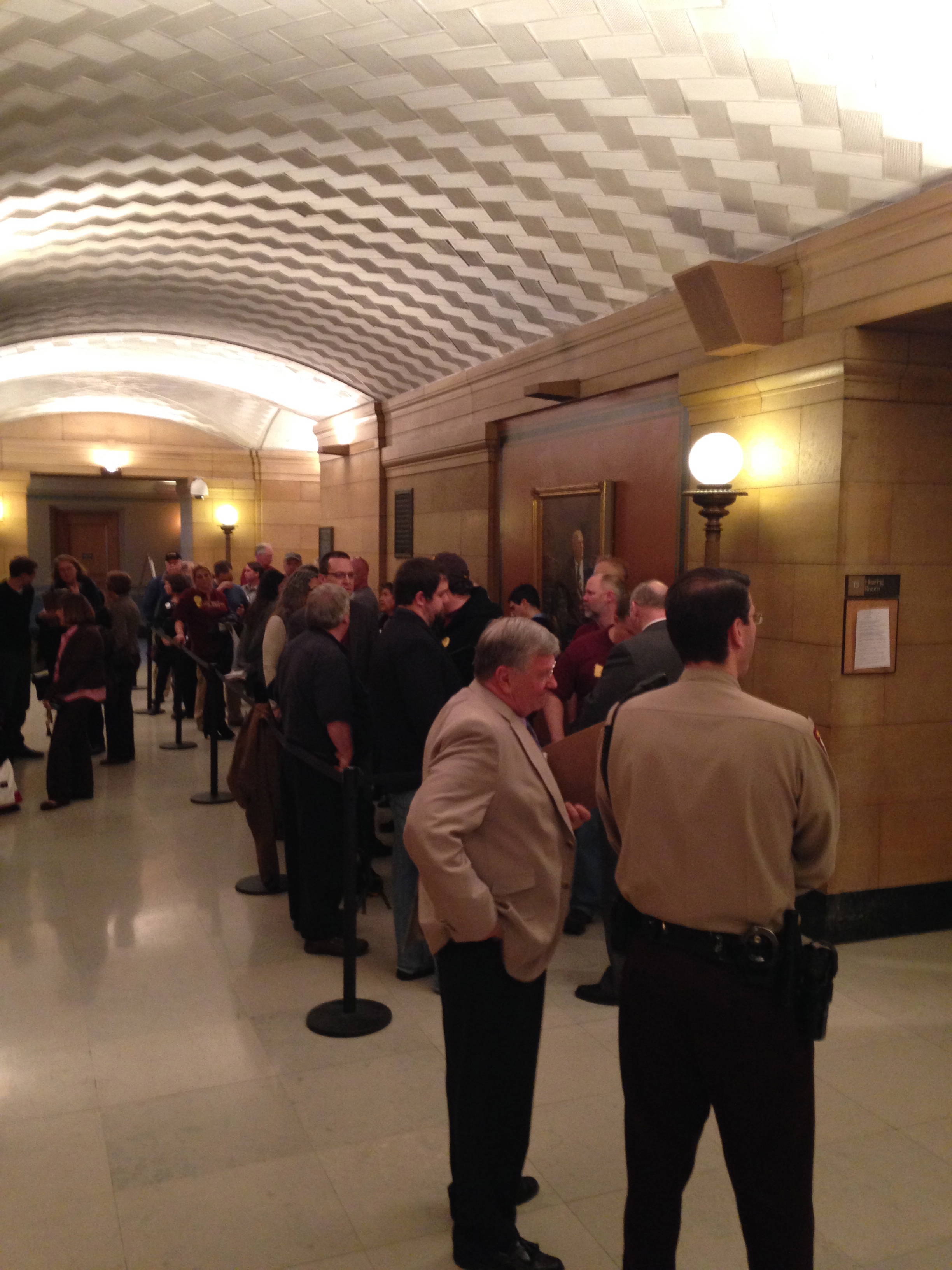 I did a nose-count; Real Americans outnumbered people there for “Protect MN”, as usual, by a lopsided margin. 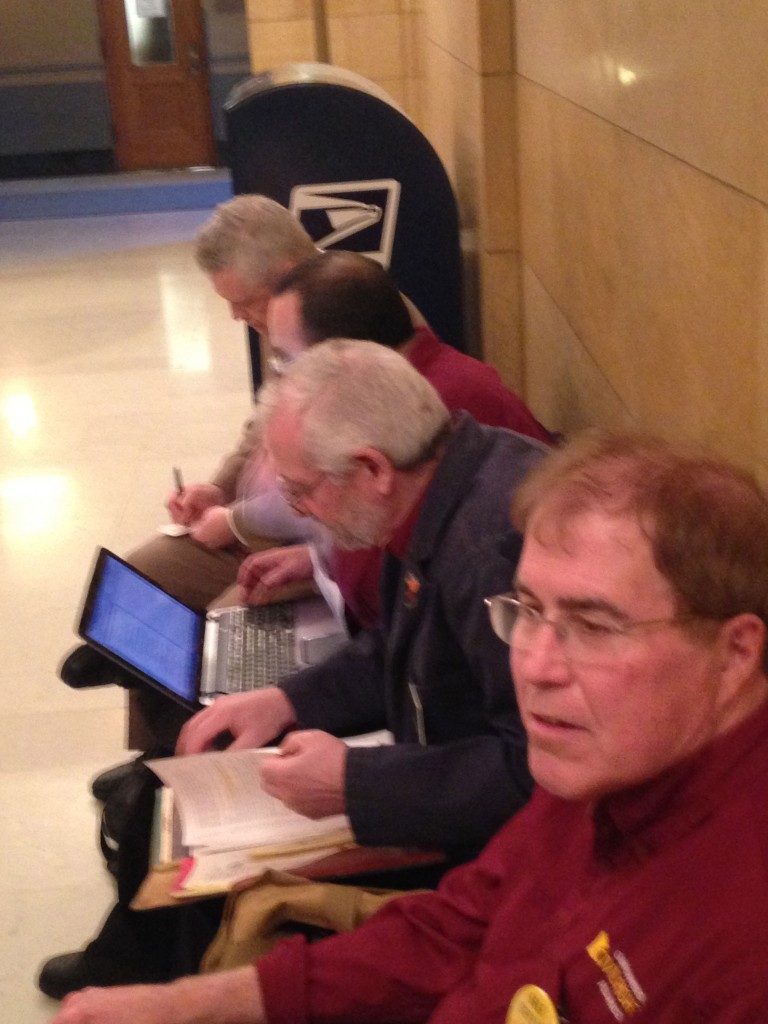 …but for the most part, everyone waited.  And waited some more.

There were several updates from security; they were busy with other bills; they were going to get through a few more and then take a half hour break before getting to 2639.

So we waited some more. 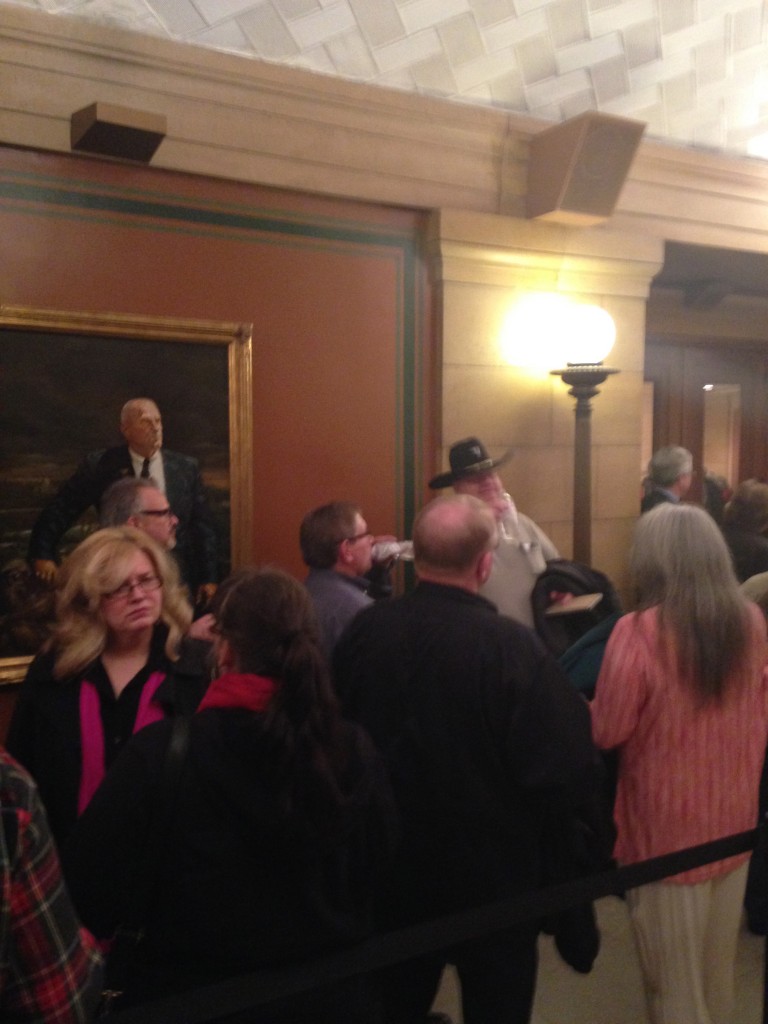 A few cases of water bottles, courtest of GOCRA, made the rounds. It was warm in there.

GOCRA brought water and granola bars, which theypassed out up and down the line (including to the anti-rights people; I had the singular pleasure of giving water and a granola bar to Rep. Martens).

They took the half-hour break – which ran more like an hour.  And then they re-convened – and addressed the Fetal DNA bill.  For an hour.

I had to leave; I was fighting a cold, and had to work this morning.

Latz didn’t bring up his gun-grab bill until nearly 11 – after he’d let Heather Martens and her friends in through the back door, essentially packing the hearing room with his supporters.  Latz has set himself apart, along with Reps. Paymar, Hausman and Martens, as one of the most virulently anti-civil-rights people in the Legislature; he quite clearly passive-aggressively used his power as committee chair to make the hearing as difficult as possible for the unruly peasants who had the affrontery to oppose him.

Rob Doar, the VP of Government of Affairs for the Gun Owners Civil Rights Alliance, summed it up about the same way: “Senator Ron Latz is wll established as one of the most anti-rigths legislators in Minnesota.  Under his leladership of the Jundiciary Committee, we’ve come to expect he’ll use every tool at his disposal to make hearings as difficult as possible for anyone who opposes his agenda”.

At the end of the evening, the bill passed from the Judiciary Committee.

Which is no surprise; the bill was going to pass Senate Judiciary no matter what; Michael Bloomberg invested a LOT of money in this session, and there needed to be something to keep the metrocrat troops rallied, for all that investment; the Metrocrats control the Judiciary Committee.  When Bloomberg says “speak”, Latz will bark on command.

Now, reality sets in.  There needs to be a companion bill in the House; the House DFL caucus is panic-stricken about their chances this fall, and getting saddled with one of Latz’s gun-grab bills would be poison for a couple of outstate DFLers that are already fighting for their lives.  And Tom Bakk – who is an Iron-Range union guy who loves his big-game hunting – knows what long memories us civil rights advocates have.    If I had to bet, I’d say this bill dies in committee without getting to the floor, or at the very worst, in conference.

Which is not another way of saying “relax for the rest of the session”.  There will be more hearings, more amendments, more attempts to weasel legislation through the system.

You need to call your legislators.  Thank the good guys.  Politely urge the ones who are wrong to reconsider.  Urge the fence-sitters to throw a vote for freedom.

We can win this round.  Indeed, we can humiliate the bad guys, just like last year.

4 thoughts on “Our Passive-Aggressive Overlords”