From his initial eledtion in the Democrat wave of 2006, until the 2016 election was all over but the shouting, Tim Walz got, and earned, an “A” rating from the NRA, and good marks from state 2nd Amendment human rights groups as well.

You could see the change, though, as the 2016 campaign wound down; he started cuddling up to the gun grabbers. 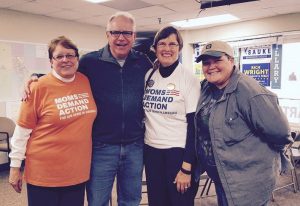 Tim Walz, cuddling up to the Dreamsicles and Moms Want action in 2016.
Pass this photo around.

It made no sense – until you remember he was starting his gubernatorial run.

And for any DFLer, the road to the governor’s mansion starts with convincing the bat-splittle crazy Metro DFL that you hate guns worse than rape.

He tried to play both sides, of course; while he spooned with the gun grabbers, even picking lifetime F-rated Peg Flanagan – one of the most “progressive” reps in the House – for a running mate, he also claimed to the press that he, given his shooter bona fides, could serve to “bring both sides together”.

Which did not amuse the Real American movement.   I think we’d rather negotiate with Erin Maye Quade; she’s at least honest about wanting to destroy our ultimate guarantee of liberty.  Also she’s out of office.

But that’s not going to prevent the Media/DFL Complex from trying to flog the charade for the uninformed (aka “Most Democrat Voters”).

The PiPress got smokescreen duty, apparently, this week, and ran this puff piece about Walz:

Tim Walz, the Democrat with the “F” grade from the NRA, wants to ban bump stocks, expand background checks and give courts the authority to temporarily take away someone’s guns if the person is deemed a threat, as well as ban “military-style assault rifles” in Minnesota.

Jeff Johnson, the Republican with the NRA’s “A” grade and endorsement, wants none of that. He opposes any tightening of gun laws.

Election 2018Guess which of the two candidates for Minnesota governor owns more guns.

Walz. He owns three today. The Nebraska native and former Mankato High School teacher grew up with guns and was given his first at age 11.

Unmentioned:  in addition to “expanded background checks” (in reality, a gun registry) and taking guns with no due process on accusation and after ex parte hearings, he also supports an “Assault Weapons” ban.

The article is part of Walz’ effort to appeal to what Real Americans refer to as “Fudds” – people who are dovish on gun control, since nobody is talking about taking their hunting rifles or duck guns or whatever their hobby is.

Walz is yet another “camel’s nose under the tent” DFLer – only worse, since he still tries to parlay his revoked NRA cred to appear “moderate”.

He’s the worst form of traitor.

21 thoughts on “October – But No Surprise”