In perhaps the most bald-faced violation of Berg’s Seventh Law in history, the DFL – which is constantly whinging about phantom claims of “voter suppression” – is actively trying to disenfranchise half of this state’s electorate in the Presidential election.

DFL Chair Ken “Dwight Schrute” Martin is sueing to keep Donald Trump off the Minnesota ballot in November, over an absurd, abstruse technicality in election law:

The Democratic-Farmer-Labor Party’s Thursday lawsuit claims the Minnesota Republican Party failed to nominate its presidential electors, the people who cast the state’s 10 electoral college votes, in accordance with state law. Keith Downey, the chair of the Minnesota Republican Party, said last month that the party called a special meeting to approve alternative electors because it had previously neglected to do so. 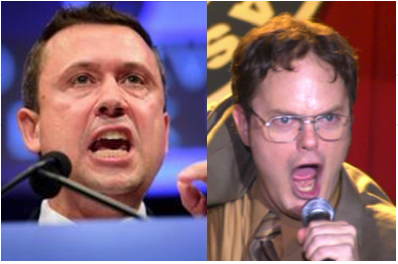 One of these people is imitating Mussolini. The other was a character on a hit TV show.

The suit, which was filed directly to the Minnesota Supreme Court, adds a new level of chaos to an already strange election season. It could cause the parties to spend some of the rushed final eight weeks of the election fighting in court, distracting from other campaigning. While the suit is a technical one, if successful, it could affect the entire presidential election.

If the DFL wins – and one would think even Minnesota’s absurdly liberal Supreme Court couldn’t possibly be that obtuse – then long-time friend of this blog Dave Thul had a great idea; every conservative should vote for Jill Stein, and make the Greens a major party in Minnesota, sapping DFL votes for at least the next four years and drawing money from the DFL’s graft pool.

There’s also a part of me that hopes Martin “wins”.  This – the most baldfaced example of corruption masquerading as law I’ve seen in my lifetime – would stand a good chance of opening an epic floodgate of support for Trump, or at least against Hillary’s party.