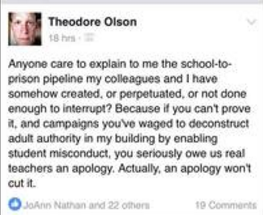 “Black Lives Matter” of Saint Paul is threatening to – you guessed it – “close down” Como High School over the posting.

(Note to BLM; if you are a one trick pony, eventually people get bored with that one trick.  It might pay to learn a new one.  Just saying).

Now, if you’ve read this blog, you know I’m no huge fan of the public school system.   I’ve got my reasons.  I don’t cut public schools, least of all the SPPS, a whole lot of slack.

And this is another example of a particularly ugly form of anti-intellectual know-nothingism that’s sweeping ” progressive” circles in “progressive” cesspools like Saint Paul; shaming and attacking and calling “racist” the very act of questioning BLM.

Of course, the SPPS’ leadership will be too pusillanimous to react as it should.  It’s sort of baked into their organizational DNA.