I got this in the mail from Minnesota’s largest Iowa-based gun rights group:

SHUT UP AND GO AWAY.

That’s the message supposedly “pro-Second Amendment” State House Leaders in St. Paul are sending to Second Amendment supporters all over Minnesota on Stand-Your-Ground.

Now, I’m counting on you to remind them who they were elected to represent in the first place!

Of course, as we noted a few weeks back, Minnesota’s legislature not only passed five fairly important pieces of Second Amendment human rights legislation – Permit Reciprocity, barring confiscations during emergencies, eliminating the capitol felony trap, and legalizing federally-permitted suppressors and buying long guns in non-contiguous states – but they passed it with a bipartisan majority in both chambers, including the DFL-controlled Senate, and Governor Dayton signed it.  He’d promised to veto any bill including legalized suppressors, but – here’s the amazing part – he was actually convinced, in a rational, factual, lucid discussion with a Second Amendment activist, to change his mind.

Let’s make sure we’re clear on this:  the Governor flipped on suppressors after a second amendment activist who’d spent years building relationships at the capitol got a five minute window to argue the case.

Not by stomping and banging the table.

Which brings us back to the letter, from “Minnesota Gun Rights'” Chris Dorr:

The truth is, after the results of the 2014 elections –-where gun-grabbers were defeated in droves at the polls — I know many Second Amendment supporters were counting on the new House majority to keep their promises to defend and advance critical self-defense legislation. . .

Which, as noted above, they did.

But that’s apparently not what the letter is about:

I can’t tell you how incensed I became when I read this open letter!

Mr. Dorr – please do tell us how incensed you were.

Also, please tell us about this letter that said “Stand Your Ground” was dead.  Because I can only remember one open letter from legislators this past session; this one.

And I’d love to know what you’re talking about, since “Stand your Ground” wasn’t really on the agenda this session.  The Governor vetoed it, and after a year of propaganda after the Trayvon Martin circus, it’s kinda a hard sell in a DFL-led Senate.  It’ll be back, someday – ideally with a pro-Second-Amendment Senate and Governor.

‘Til then, it’s just…well, stomping your feet and pounding your desk.

Of course, I know many weak-kneed and anti-gun politicians hate organizations like Minnesota Gun Rights because we don’t cut smoky backroom deals, or hit the cocktail circuit with them at the state capital.

Y’see, Chris, that’s the kind of talk that impresses people who’ve never had to try to convince a politician, or a voter, to change their vote.

In fact, the only “convincing” that Minnesota Gun Rights has done this past session was to persuade 16 pro-Second-Amendment legislators that MGR was all flannel shirt and no Paul Bunyan: 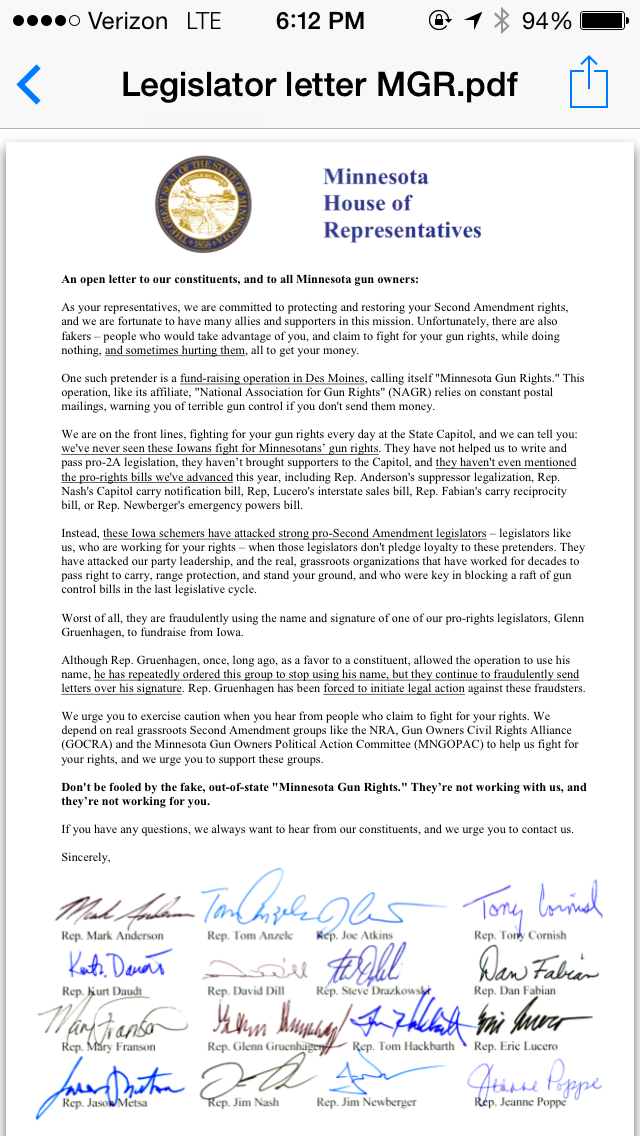 And – let’s let this sink in for a moment – Steve Drazkowski, author of our last Stand Your Ground Bill.

The bill that Minnesota Gun Rights is wrapping itself in in this letter.

And now, the call to action:

That’s why I’m counting on your IMMEDIATE action.

With session out, the time to identify, prepare and mobilize for 2016 is now, and I’m determined to turn up the heat like never before…

That would actually be entirely accurate; any actual heat from MGR on the issue would be unprecedented.

…with a massive program, including:

>>> Generating 25,000 YOU WORK FOR US! petitions from all over Minnesota insisting the State Legislature passes Stand-Your-Ground;

>>> Using email, social media and Internet ads to mobilize an additional 10,000 Minnesotans from all over the state;

>>> Working the blogs and granting media interviews to explain exactly why Stand-Your-Ground would make Minnesota freer and safer;

In other words, stuff that any guy can do for free, on Facebook and via email.

>>> Paying for hard-hitting radio, newspaper and internet ads to ensure politicians are feeling the most heat right before they’re forced to vote.

Which brings up an interesting question.

“Minnesota Gun Rights” has been raising a lot of money for a long time now.  In the 2014 cycle, they dropped literature in one district (Roz Peterson’s), which had no discernible effect on the race, and a few in Ron Latz’s utterly safe DFL district, which was really more of a frat prank than a campaign activity.   Reportedly, four of them, airing on one day before the election, on AM1130 – 99% of whose audience would vote pro-Second Amendment no matter what. For a grand total of about $800-1,000.  Not “before they were forced to vote”, but before election day.

For all that fundraising, we get Facebook, a few reams of literature, and one day’s worth of radio ads targeting people who are going to vote pro-gun anyway.

For this, they’re fundraising?

Wait – didn’t we read that already?

In so many ways.