The DFL is in the midst of an extended campaign of sniveling about the amount of money in politics.

A look at this list of independent expenditures registered from the 10 Minnesota House races that flipped last election shows you why:

The DFL spent more.  Sometimes a helluvva lot more.  And it didn’t work. 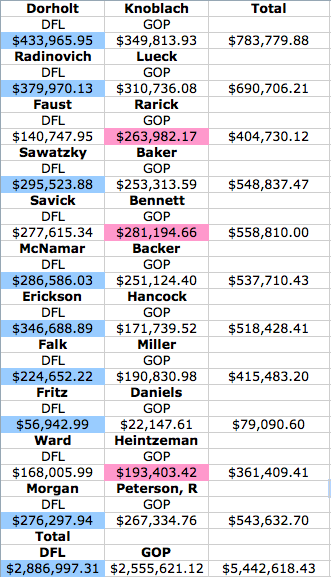 Courtesy John Rouleau of the MN Jobs Coalition, via Twitter.

The candidate with the most indy spending in each race is color-flagged.

Of 10 races, DFL groups outspent GOP groups in eight of them, notching a little over 10% more independent spending.  And that doesn’t even tell the whole story.

So no wonder the DFL is so concerned about rationing money in politics; theirs didn’t work.  They need less competition.

4 thoughts on “Money In Politics: Talk Dirty To The DFL”