…or things I don’t understand about Minnesota sports media coverage.

Mullet Over.  Let’s try a thought experiment to better understand NFL salary logic.  We’ll take two defensive ends for the same franchise.  One is 31 years-old, has 4 Pro Bowl appearances, 128.5 quarterback sacks, and has been named one of your franchise’s 50 best players.  The other is 30 years-old, has 39 sacks to his name, and might be most famous for kicking a Green Bay Packer in the crotch.  Now guess which one of them is considered to be at the end of his career while the other has just been resigned to a 4-year contract extension and is considered in his prime.

We’re often told that the NFL is simply a business – a rationale often employed when popular, successful veterans like the soon-to-be-former Minnesota Viking Jared Allen finds himself without a home.  And considering that Allen is looking for a salary around $10 million a year, in theory it becomes easier to understand why the Vikings decided to pass on renewing his contract – a team filled with holes could use that salary space to address other needs.

But the supposed financial underpinnings of why the famed mullet-hair defensive end is headed out of the Twin Cities makes less and less sense when his fellow DE Brian Robison has been rewarded with a new contract worth $4.4 million a year.  That move has been followed this off-season by the Vikings signing four new defensive linemen, only one of whom, Linval Joseph, is considered a valuable addition.  Worse, the Vikings re-signed seldom-used DE Everson Griffen to a monstrous $8.5 million per year contract – a reward for 4 seasons and 17.5 sacks.  That made Griffen the 10th highest paid defensive end in the NFL.

The NFL’s (and Viking’s) spending logic may always defy reason, but the local press has been entirely complacent about Allen’s departure.  This isn’t like the end of John Randle’s career with the Vikings – another popular defensive end with a Hall of Fame resume.  Randle left the Vikings at 34 years of age after an underwhelming season yet still played another three years, including a season with 11 sacks.  By that example, Allen could still have 3-4 years of playing close to his prime before significantly falling off.  But the local media is convinced that Allen is “bust material” to any team that signs him.  They’ll have the next four years of Brian Robison’s career to defend that opinion. 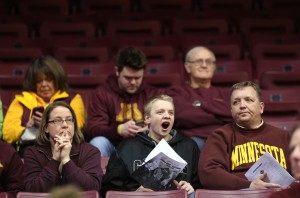 NIT Pickers.  Is there anywhere in this country where a little boy is playing basketball, saying to himself “Gee, one day I’ll lead my mediocre college team to the NIT final four in Madison Square Garden in New York”?  No.  Because kids these days don’t say “gee” and the National Invitation Tournament is considered the post-season equivalent of kissing your sister…unless you win it.

Just weeks ago, disgraced former Golden Gophers basketball coach Clem Haskins appeared to honor one of his former teams – and the crowd lustily cheered him.  Certainly one NCAA Final Four appearance has a lot to do with that support, but Haskins (and the entire men’s basketball program) benefited greatly from winning two NIT titles back in the 1990s.  Would the program have been better off losing in the First Round of the NCAA those two years instead?

That sort of question has been asked repeatedly on sports talk radio in the Twin Cities the last few years, between Tubby Smith’s Gophers going to the NIT Final Four in 2012 and Rich Pitino’s current NIT bid.  In the immediate economic sense, the Gophers are better off competing in the NIT than being one and done in the NCAA.  As a number one NIT seed, the Gophers will have had three games at home, benefiting from ticket and concession sales they otherwise would not have received.  Of course, that assumes fans come out, as even the Gopher’s players don’t seem to be taking the NIT very seriously.

Let’s not mince words – playing in the NIT isn’t the goal of an NCAA basketball program.  But for programs in transition, as the Gophers definitely are with the majority of the team either in their senior or junior year, the NIT provides a national stage for post-season experience and recognition…as long as they beat Southern Mississippi.

Love Sick.  He’s the toast of NBA marketing.  He’s doing ESPN commercials.  He’s convincing us that you can maintain an NBA body on Taco Bell nachos.  He’s even occasionally helping the Minnesota Timberwolves win games!  He’s soon-to-be-former Timberwolf Kevin Love – and the local media’s seemingly okay with that.  In fact, they’re even preemptively trashing him, because break-ups are easier to take if you dump them first.

Love’s star-power, his strengths and weakness as a player; none of it changes the fact that for the second time in seven years the Minnesota Timberwolves will be forced to trade away their franchise player for the table-scraps from some major market team.  It’s an indictment on the NBA, which is rapidly becoming a handful of Harlem Globetrotters against a majority of Washington Generals, but also an indictment against the Wolves.  Not every major market team has succeeded in the modern era of the NBA, nor every minor market stumbled.  Witness the ongoing ineptitude of the New York Knicks, who won their first playoff series in 13 years despite a high-priced roster and the largest media market in the nation.  Or view the success of teams like Oklahoma City or Indiana, who either retain most of their elite players or manage to win without “superstars.”

Some media reactions to Love’s pending departure would be understandable.  Denial – after all, his contract isn’t up for another year, and did you hear what he said about the Los Angeles Lakers?  He wants to stay!  Or apathy – the Wolves haven’t been relevant in town for a decade, and Love is a bigger media sensation nationally than locally.  Heck, Ricky Rubio might be a bigger name among some fans in town.  But the larger reaction has been resignation, coupled with telling fans they should just “savor” Love’s time with the team, like enjoying the final days of a summer romance.

Perhaps the lack of angst over Love is due to new GM Flip Saunders’ aggressive media campaign, doing interviews with every reporter and sports station in town.  Saunders didn’t “poison the well” for Love with Minnesota and the media likes Flip enough to provide cover for a pending trade disaster.  That may explain the media’s reaction, but doesn’t exactly defend it.

Bogart that Dubay.  Some sports stories in Minnesota are hard to comprehend, others are simply just sad.  The career of radio personality Jeff Dubay falls into the later category.  The high-energy, motor-mouthed compatriot of Paul Allen on KFAN, Dubay’s career and life took a sharp turn downwards with his arrest for narcotics possession in 2008.  Fighting addiction, Dubay seemingly got his life back on track in early 2013, rejoining the radio waves on 1500 ESPN.  A year later, minus the drugs, Jeff Dubay’s career is back where it started.

Let go from 1500 ESPN in what was described as a “cost-cutting move” in January, Dubay briefly joined the Tom Barnard Network as part of 105.7 The Ticket, largely doing podcasts.  After only several weeks of work, Dubay was fired from the podcast, going out with an epic Facebook rant that probably has ended whatever radio career (in Minnesota or otherwise) he likely had left.  To read Dubay’s tweets and Facebook messages reveals a man in disarray:

“Somebody help me,” he tweeted. “I need to deactivate my account now and don’t know how”

It was deactivated late Wednesday or early Thursday.

In a tweet before it was deactivated, Dubay wrote, “I’ve never felt more beaten in my entire life.”

He also tweeted in response to a question about his Facebook page disappearing, “The lawyers threatened. Can’t fight the machine”

In another tweet, he said, “Sean barnards lawyers have threatened me but the posts are the truth. Do your worst”

Jeff Dubay was not a brilliant sports talking head.  His insights were often pedestrian, his delivery was usually so fast he practically talked over himself.  In his return in early 2013, he sounded nervous – and reasonably so.  But Dubay also understood the fundamental principle of all entertainment…be actually entertaining.  Minus the “common man” gimmick of Dan Cole, or contrarian nature of Dan Barreiro, Dubay often came across as the voice of the average fan with some humorous bite.  Coupled with his battles with addiction, it was hard not to root a little bit for Jeff Dubay.

Hopefully he’ll be given one more chance.