Is Detroit’s new-found cause célèbre ignoring the past to cloud the future?

George Clooney had the Sudan.  Bono has Africa.  Anthony Bourdain – and much of the American media – apparently has Detroit. Michigan’s So Not Grand Central Station: built in 1912 and on the national registry of historic places. It was closed in 1988 and is one of Detroit’s estimated 78,000 abandoned buildings.

In recent months, the city of Detroit has witnessed two narratives arise in Phoenix-like fashion from the economic ashes of the city, often in conjecture with themselves.  One is the purported economic revitalization of the city that gave birth to Motown and the American automotive industry.  It is a narrative fostered by Quicken Loans founder (and Cleveland Cavs owners) Dan Gilbert who, among others, has put millions into Detroit to try and restore its grandeur.  The other narrative, the so-called “ruin porn” seen in picture form below, depicts Detroit as a third-world ghetto.  A Somalia on the St. Clair River.

The former delights the denizens of Detroit with hopes of a better future.  The latter rankles them.  Gilbert himself expressed outrage when 60 Minutes balance their report on the Motor City between Gilbert’s altruism and the destruction of the out-lying portions of the city, comparing it to Dresden after the Allied bombing of World War II.  Gilbert tweeted a defiant message, stating “a city’s soul that will not die was the story & they missed it.”  But even a sympathetic, blue-collar soul as Bourdain, whose CNN show Parts Unknown highlighted the city last night, saw the need to balance Detroit’s attempts to pick itself up off the ground with the stark realities of a city undone.

The Fisher Body Plant: once part of the GM empire

Both narratives ignore the Chrysler in the room – how Detroit got to where it is today.

Gilbert is no fan of urban farming, though. When he envisions land cleared of  blight, he sees developers rushing in to build anew…

“When that blight is gone, maybe we don’t have to be talking about shrinking cities because it will be such a rush of people who want to get into low-value housing — when all the utilities are there and the land is pretty much close to free— not exactly free, but close to it — and all the utilities are there, it becomes very cheap for a builder/developer to develop a residential unit, and they are going to develop them and develop them in mass as soon as we get the structures down and maybe we don’t have to worry about raising peas or corn or whatever it is you do in the farm.” 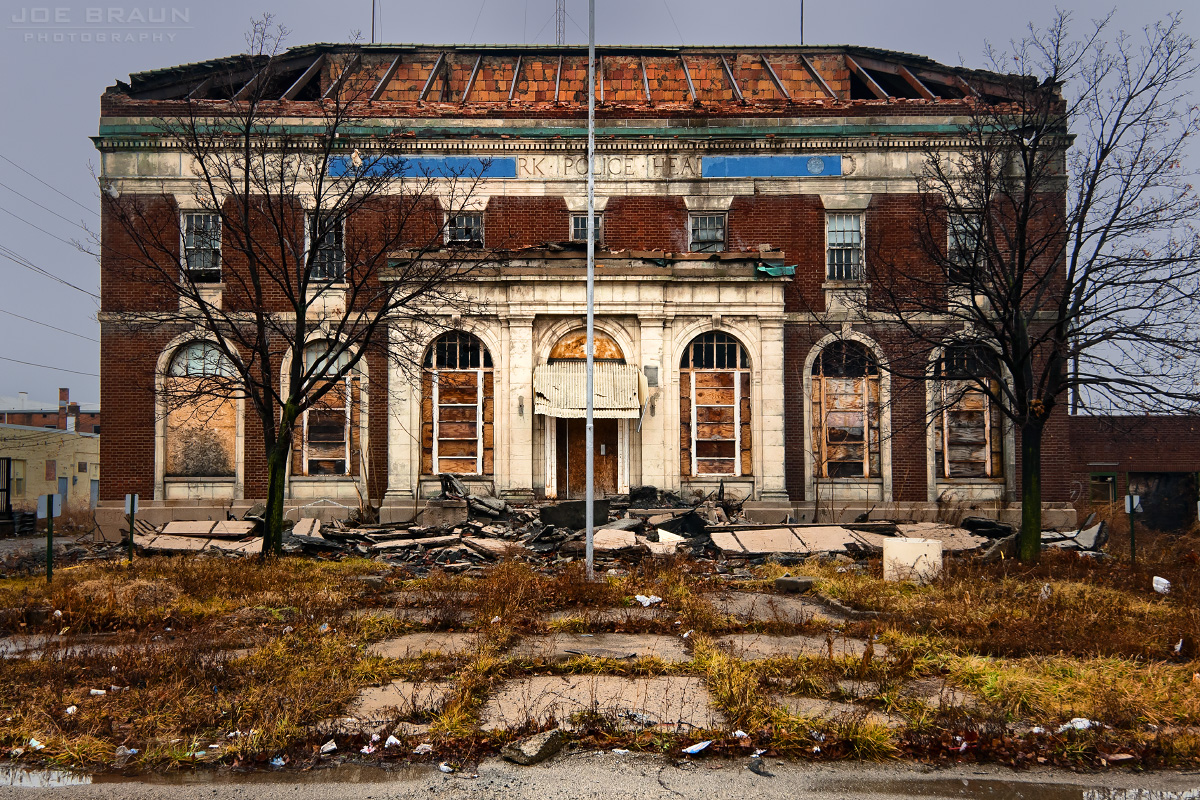 The Highland Park Police Station: even Detroit’s police stations no longer want anything to do with the city

And what will cause developers (yet alone individuals or businesses) to return to a city with the highest property tax rate in the country?  What will encourage retail industries when Michigan’s sales tax is 6% on top of that?  Detroit’s backers can honestly claim that the city ranks no where near the top of the tax chain (Detroit ranks 92nd nationally; Minneapolis is 52nd by comparison).  But the tax climate is far from ideal, especially the dubbed “most dangerous city in America” with a murder rate 10-times the national average.  Throw in a 58-minute response time for police, to attract businesses back, Detroit may literally need the fictional hero RoboCop (to whom a statue is being built – seriously).

There isn’t much evidence that Detroit is about to change its ways. 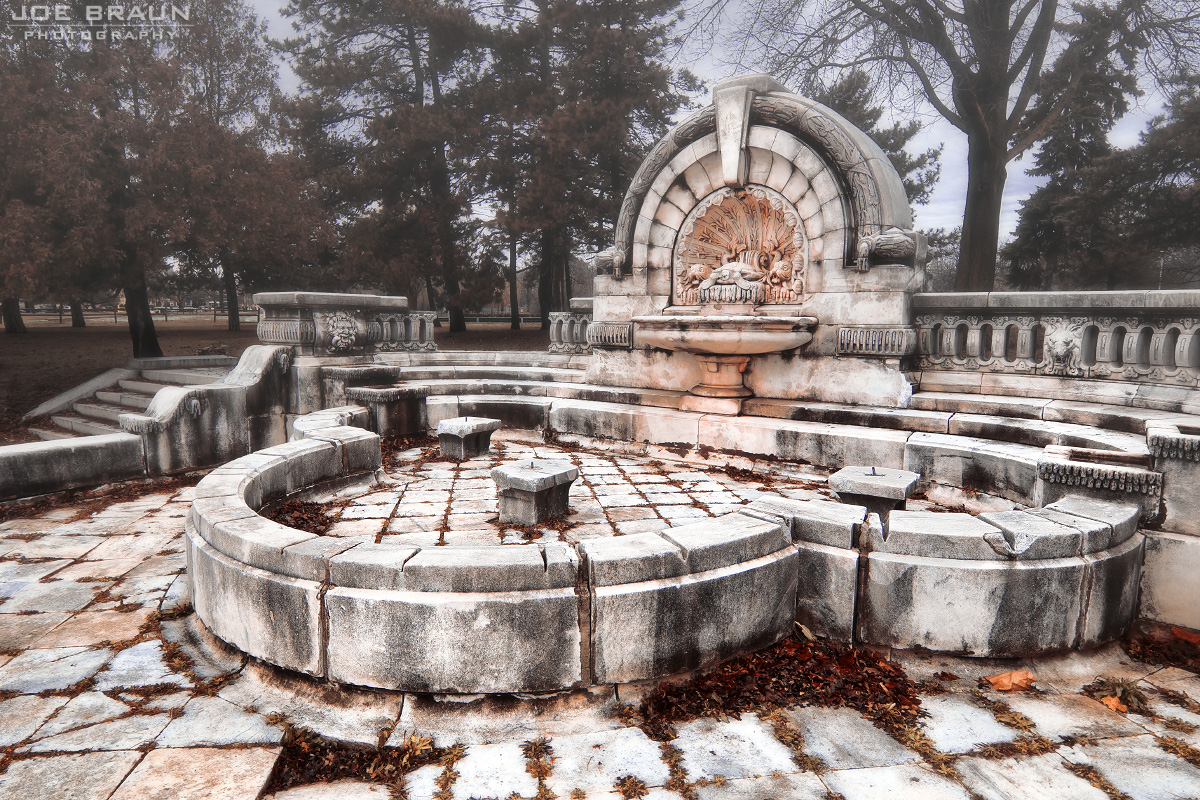 The Merrill Fountain at Palmer Park: has sat empty for 50 years since being moved from the Opera House. Vandals have stolen much of it.

Since Governor Rick Snyder’s decision to appoint emergency manager Kevyn Orr last spring, Detroit’s journey to bankruptcy has been managed with minimal (some would say no) input from City Hall.  As the case has headed to court, where Orr has testified about Detroit’s long-term debts of $18 billion, city officials have fought the measure almost every step of the way.  The election of Mike Duggan as mayor, the former head of the Detroit Medical Center, has been advertised as the promotion of a turnaround artist.  But while Duggan had success revitalizing the city’s Medical Center, Duggan also ran on opposing Orr’s decisions and comes as a political protégé of former Wayne County Executive Edward McNamara – an official who backed the cartoonishly corrupt Kwame Kilpatrick and had FBI agents and state police raid his own office in November 2002, over alleged corruption in airport contracts and campaign fundraising.  Meet the new boss.

Oh, there have been the requisite platitudes.  Duggan and Orr have broken bread in what was described as a “very good first meeting.”  And Duggan has said all the right things that a reformer would state, such as being “a huge believer in lean processing. If you are not excellent at making systems work, you cannot survive…”

But the inertia of the status quo has been apparent even after only one week from the election.  The Michigan House Appropriations Committee ranking Democrat Rep. Fred Durhal, Jr. is angry that Duggan hasn’t called him yet.  Metro Detroit AFL-CIO President Chris Michalakis essentially threw down a polite ultimatum that Duggan must “honor” his commitment to working families, while suggesting the labor doesn’t trust the new mayor.  Duggan claims he just wants a seat at the table as Detroit’s debts are solved, and if Synder and Orr are smart, they’ll allow it. Wilbur Wright High School: closed in 2005, this building actually is among the few on this list that has been demolished. 10,000 buildings have been torn down in Detroit since 2010.

The decision to abrogate Detroit’s city government in the bankruptcy process may have been politically necessary (Detroit certainly hasn’t come to grips with its position despite many, many, many opportunities), but doing so has allowed Snyder and Orr to play the villain while the usual suspects who caused this economic disaster play the victim.  However, it’s also allowed Snyder to take all the credit too.  67% of Michigan voters approved the move back in March (including 41% of Detroit), and the decision has given Snyder a welcome bump in his approval rating.  That’s a short term political fix to a long-term structural problem.

Mike Duggan may be a product of the system that failed Detroit, but he’s viewed warily by both it.  Orr’s contract expires in the fall of 2014; Duggan and the City Council can vote whether or not to renew it – almost literally the only voice they have in the process.  If that’s the first time Duggan has to impact the process, he’ll have likely caved by then to labor, vote to end Orr’s tenure and – more importantly – work to undo reforms set in place.  Should Rick Snyder not return in 2015, an opportunity to address Detroit’s deeper fundamental problems will have passed and a new administration will slap a band-aid bailout on the city, and hope more journalists write about Dan Gilbert than urban hunters who live off of raccoon to supplement their meals.

4 thoughts on “Blight of Day”