We’ve gone around and around with Representative Kim Norton of Rochester.  Norton, who is retiring from the Legislature after this coming session, is going to be carrying Michael Bloomberg’s water; she’ll be sponsoring, so we’re told, a number of gun control bills.

Not that you can get a straight answer out of her; although she went into great detail in the Rochester Post-Bulletin in which she called for a “conversation about guns”, she also told anyone who wanted to engage in dialog (as opposed to echo-chamber monologue) that she really had no idea what she was going to put into any bill, and had nothing to talk about.

Which is kind of hilarious, if you think about it.

Of course, on Twitter over the holiday weekend, she found a specific proposal to support – from Bloomberg’s chief streetwalker in the Senate, Kirsten Gillibrand.

And her response (below) to MNGOPAC leader Bryan Strawser is one for the record books, and one that every Rochester voter should take up with Ms. Norton: 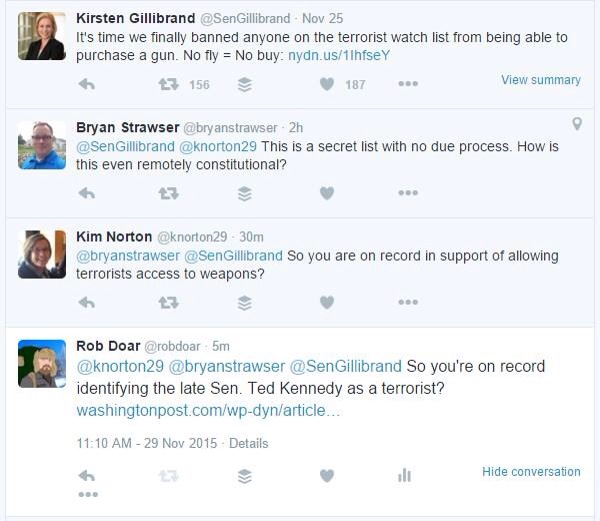 That’s right – for opposing denying civil rights to people who wind up on a non-transparent, easily-abused, unsupervised grab bag of names collected so willy-nilly it’s become the stuff of folk legends, for which the Feds don’t have to tell why, or even whether, you’re on it, Rep. Norton, one of the DFL’s inner circle thought leaders, equates you with a terrorist.

Remember when Democrats were opposed to mysterious starchambers handing down secret lists of enemies, with no transparency or accountability?  I’ll bet Rep. Nortdon does.

Question:  Do you suppose anyone in the media will question Rep. Norton on this?