Can you imagine if a significant Republican were to acknowledge that violence was a good thing in pursuit of political ends?

No, not Donald Trump urging his supporters to “hit back”, at a time when people were, y’know, hitting them first.  .No, actually forming groups and going out and beating up people who dissent from the GOP.

Can you imagine the projectile pants-soiling that’d happen?

Especially if it weren’t some marginal figure – but a sitting Congressman?  To say nothing of a member of the party’s central leadership?

But as usual – as always – it’s the Democrats doing it.   Keith Ellison, to – let’s be honest, nobody’s surprise – has endorsed The Antifa Handbook

Ellison, the deputy chairman of the Democratic National Committee, posted a photo on Twitter Wednesday of himself posing with the book “Antifa: The Anti-Fascist Handbook.” The book calls violence during counter-protests “a small though vital sliver of anti-fascist activity.” 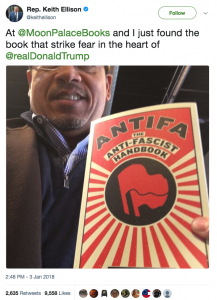 Ellison’s post said the book should “strike fear into the heart” of President Donald Trump.

Big Left, via its subsidiary Big Media, loves to remind us that “Right Wing Violence” is the “real” danger, and is lurking around the corner, one of these days, honest.

But it seems all the actual violence, and endorsement of more violence, to say nothing of use of mob influence to control society, is coming from the left.