Last week, I wrote a bunch of pieces on an editorial that appeared in the Strib the weekend before last.

The Strib complained about the growing street crime – in particular about the consequences of some local and higher court rulings that make enforcement against crimes like public intoxication and panhandling harder without specific legislative intervention.  (They also proposed the same impotent diversions on gun control that every DFL metrocrat shill runs to when faced with a wave of violence).

All the problems come back to one thing – a mayor and city council that may or may not be unable to grapple with the issues, but are certainly unwilling to interrupt the consequence-free virtue-signaling – like strong-arming local businesses with minimum wage hikes and sick time benefits, and social justice warrior-mongering – that obsesses so many of them. 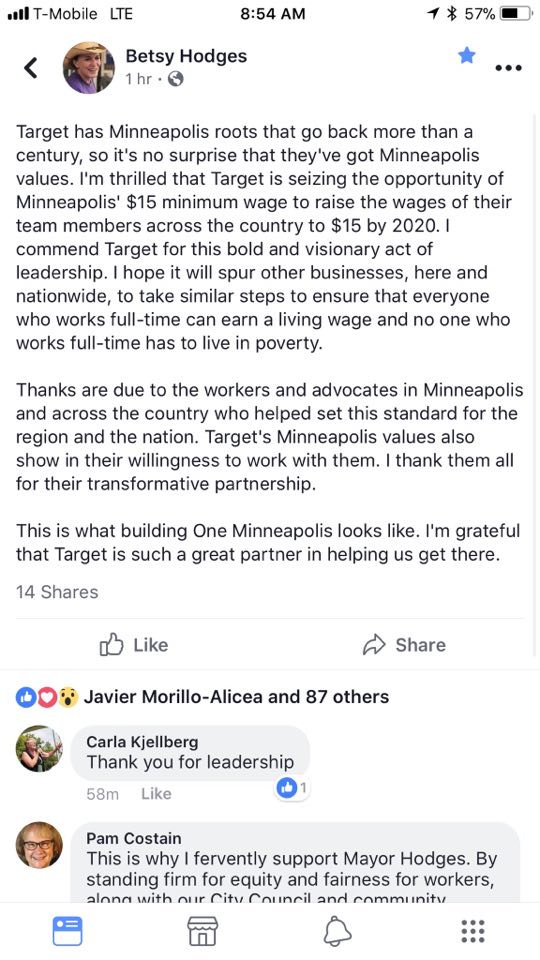 Betsy Hodges in “action”. Crime skyrockets – but Target “Raises its minimum wage”.  Of course, technology has led to them cutting thousands of entry-level jobs, already.  Just like we warned you.  More to come.

And this is the city council that, in large part, the Strib has supported to a fine sheen for the past sixty years.

And the mayor they’ve supported all along as well; I take you back to October, 2013, when the Strib editorial board endorsed Hodges for mayor:

Hodges is aligned with this page on the need for improved transit, including streetcars and enhanced bus service, as a driver of economic development citywide. As mayor, she’d play a key role in deciding the future of the Southwest Corridor light-rail project.

Although the school board operates independently from City Hall, Hodges says that as mayor she would seek to build consensus around the increasingly desperate need to close the city’s achievement gap, and she puts the right emphasis on early childhood development and prenatal health programs with her proposed “Cradle-to-K” cabinet. She’s talked generally about longer school days, more flexibility for administrators in teacher labor agreements, and support for reforms proposed by Superintendent Bernadeia Johnson.

Hodges also promises to be aggressive in using technology to enhance public safety and would seek more accountability in hiring, training and disciplining cops. In a recent meeting with the Editorial Board, she acknowledged that the police union contract makes it too difficult to fire bad cops.

Does any of this – which reflects the express wishes and position of the most influential editorial board / DFL PR firm in the state – sound like what’s actually happened since the voters gave the Strib, yet again, exactly what they wanted?

Own it, Strib.  You got your wishes in the North Loop, as you have throughout the city.  You did your best to break it.  You fix it.

8 thoughts on “The North Loop Is Burning!, Part V: You Broke It, Strib. You Fix It.”