SCENE: Mitch BERG is trying out a guitar at a local music shop. As he begins to fingerpick the intro to “1957 Vincent Black Lightning”, Avery LIBRELLE enters the store, sees BERG, and walks up behind him.

LIBRELLE:  We know you crazy gun nuts don’t care how many children die for your so called “right to keep and bear arms” -= but why do you oppose funding for basic public health research? What are you afraid of?

BERG:  Afraid?  Nothing.    Absolutely certain of what the criminal-safetyi movement means by “science?”  Now you’re on to something.

LIBRELLE:  Why?  Afraid of science?

Here’s a great example; this message went out yesterday: 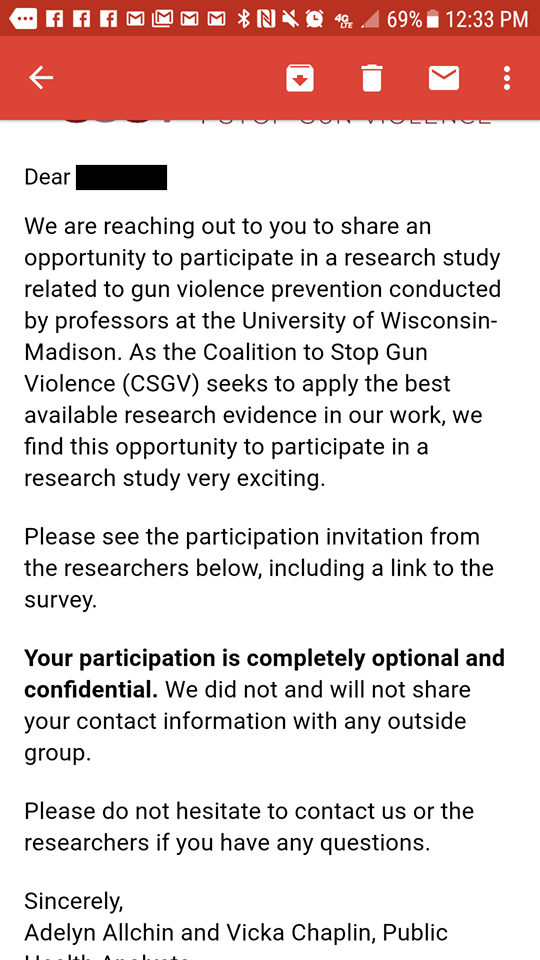 BERG:  So?  A survey using a self-selected  group of particpants, recruited by an anti-gun group?  Real “public health”, or even sociological or demographic –  research uses random subjects from a representative population – not people cherry-picked by a constituent that’s looking for a specific result.  And a control group?  Forget about it.

That’s not “science”.  It’s not even demography.  It’s public relations and politics.   If you call it “science”, you’re misrepresenting yourself and, yes, science itself.

Oh yeah – and in the fine print of the message, it says the “researchers” will likely quote you unless the results of the “study” are under a confidentiality agreement.

This isn’t science. This barely qualifies as group slander.  Anyone putting this, or its results, out there as “science” should be charged, at least rhetorically, with malpractice.