Berkeley Republicans involved in organizing the Milo Yiannopoulos even that was shut down by Campus Blackshirts last weekend were in legitimate fear for their lives:

By the time he got to the Martin Luther King Jr. Student Union to begin prepping for the event at 5:30 p.m., a throng of students and other demonstrators flanked the building. As he walked through the crowd, protesters surrounded him and closed in on him, pushing and shoving him from all sides.
“We know who you are, you can’t hide from us,” Tahmas recalls them saying as he pushed through the crowd.

“It was so violent at that point,” he said. “They were surrounding me. They were assaulting me.”

Rattled but essentially unharmed, he made it into the building. There he met up with Yiannopolous and other Berkeley Republicans. But it was not long before someone pulled the fire alarm. Then protesters began shooting M-80 firecrackers at the building, with several narrowly missing the group and the police officers attempting to guard them.

Tahmas said one of Milo’s security guards, a former Navy Seal, even commented: “I haven’t seen protests like this since Afghanistan.”

And if you’re a Berkeley Republican, you’ve got a stalker.  Oh, yes you do: 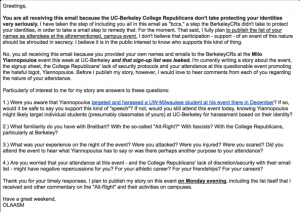 Don’t you just love the fact that someone who can write “I don’t believe attendance – support – of an event of this nature should be shrouded in secrecy. I believe it is in the public interest to know who supports this kind of thing” is, naturally, anonymous?

As I pointed out the other day – like the original Brownshirts and Blackshirts, this sort of thing is intended to drive everyone to the extreme, to empty out the center.

And at this exact moment, reading this story, it’s working.  I want Milo to come to the U of M, and I want to gather up a few hundred people who actually support free speech, and meet these cowards face to face and rip their ofay little facemasks off.

It’ll pass in an hour.