I was going to start this post out with a wry quip about the irony of people protesting a president they say will oppress people, actually oppressing people.

I’m talking about the riots in – where else? – Berkeley last night.

There, children of the wealthiest society in the history of the world, protesting others’ “privilege” by shutting down a speech (by “provocateur” Milo Yiannopolous – that caused them cognitive dissonance.

Of course, as PJ O’Rourke said, “life is full of irony – if you’re stupid”.

Then it occurred to me – this is far from an original thing.   It’s not new for political movements to have “direct action” wings, designed to radicalize the the “debate” and, eventually, the opposition.

The easy parallel is the “Brownshirts” – “Sturmabteilung” – the “direct action” wing of the Nazi Party from the early twenties through the end of World War 2: 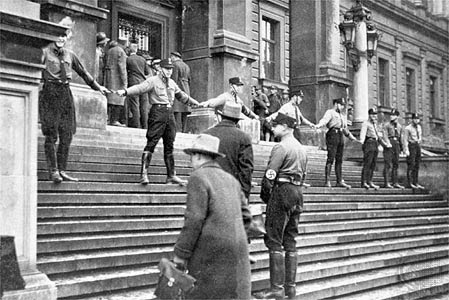 One of their primary missions – shut down political events by the Nazis’ opposition.

Of course, given this description…:

The protest turned violent around 6 p.m. when dozens of masked anarchists, dressed in black and wearing backpacks, emerged from the otherwise peaceful crowd.

…shouting down and beating Communists and Socialists and Monarchists in the streets, turning Italian politics into the full-contact sport that played into the hands of radicals on the left and left.