After a year that had seen carnage on a historical scale, the opening salvos around the Chemin des Dames region of Western France almost appeared as modest.  850,000 men, a joint Franco-British task force, lashed out against Germany’s Hindenburg Line with 7,000 guns and 160 tanks on April 16th, 1917.

The operation, the brainchild of France’s newly promoted commander of it’s northern armies, Robert Nivelle, had all the hallmarks of the sort of offensives that had dominated the Western Front since 1915 – massive artillery bombardments, human waves attacks, gruesome casualties and continued stalemate.  Only the reaction of the men who participated would differentiate the assaults from the dozens that had preceded it.

A general with the penchant towards the dramatic, Nivelle had promised that he could bring about the end of the deadlock in the West within 48 hours of the first shots fired from his offensive.  Instead, he would usher in the near total collapse of the French military. French troops, in gas masks, await orders to go over the top.  By the start of 1917, 1 million Frenchmen, out of a population of 40 million men of all ages, had died in the Great War

By the spring of 1917, the dividing lines in the Great War appeared less to be between the Entente and Central Powers, then between those nations willing to adapt and those who stubbornly refused to change.

Despite the reforms that had engineered the victories of the Brusilov offensive the previous year, Tsarist Russia had otherwise been unwilling to enact military or societal change and had fallen.  Britain’s flirtations with collapse had spurred a change in leadership and a renewed focus on relatively low-cost campaigns in the Middle East.  Germany had embarked on an aggressive crash course of reforms, including surrendering miles of territory in the name of assuming a defensive posture on the Western Front.  In comparison, France had none next to nothing.

Victory at Verdun had cost Paris more than just 542,000 men – it had set in motion a malaise that would haunt the French nation well into the next war and beyond.  The industrial scale of the bloodletting, coupled with the French command’s indifference to casualties, shook what little trust remained between the French officer corps, politicians and average soldiers.  The removal of Gen. Joseph Joffre from command of the French Armies of the North and Northeast signified not only a cosmetic change – Joffre was promoted to Marshal and given the powerless office of “general-in-chief” – but an unwelcome one.  Despite the casualties under his watch, Joffre had been affectionately known as “Papa Joffre” by his men.  His replacement by Gen. Robert Nivelle only appeared to confirm that Paris was disinterested in changing course. Gen. Robert Nivelle – his tactics of overwhelming artillery were all but impossible on the larger Western Front

Nivelle had won political acclaim at Verdun, particularly for his use of rolling artillery barrages that opened up holes for French infantry.  Brash, and an excellent self-promoter, Nivelle was the choice of a French political class looking desperately for victorious names to prop up the army’s sagging morale.  Nivelle was telling Paris precisely what it wanted to hear – that the war was not only winnable, but could be done so with one major victory.  One massive artillery barrage, Nivelle assured France’s civilian leadership, and “the German Army will run away; they only want to be off.”

Within 48 hours of the proposed start of his offensive, Nivelle promised the return of the mobility both sides had dreamed off since 1914.  As questions arose over the practicality of his plan, Nivelle’s promises grew.  By the time the first French soldiers left their trenches, Nivelle had convinced many that his offensive would literally win the entire Great War in two days, and all for the low cost of only 10,000 casualties.

The tactics that won Verdun for France would be difficult to replicate against the reformed German trenches of the Hindenburg Line.

A French Saint-Chamond tank – massive (for the era), slow and poorly armed, the Saint-Chamonds were easily knocked out of the Nivelle Offensive

Leading the criticism was the original hero of Verdun – Philippe Pétain.  Pétain noted that the concentration of artillery that had allowed for the German defenses to be weakened was simply impractical across the length of the proposed attack.  The Hindenburg Line held its defense in-depth, meaning that not only would French artillery need to find a way to destroy fields of barbed wire as long as 100 yards in some areas, but need to also hit the German reserves to prevent reinforcement rushing into the front.  The entire German strategy on the Western Front had been created to defend against Nivelle’s rolling barrage tactics, and France was obliging by fighting precisely as the German General Staff hoped they would.

The strategic reality of the war had also changed since Nivelle first formulated his offensive.  Had the revolution in Russia cost the Entente a vital partner, freeing up German divisions from the East?  Would it be better to wait and receive reinforcements from the United States?  Worst of all, French intelligence had good reason to believe the battle plans had been captured during a limited German attack.  With weeks to go before the proposed assault, Nivelle’s offensive was losing the confidence of most of France’s leadership.

Nivelle countered with his trademark bluster.  “L’heure venue!” (“the hour has come!”), he implored Paris.  Privately, Nivelle argued for the offensive on more rational grounds – if the Russian Front was about to implode, it was all the more reason the Entente needed to strike while they maintained the advantage in manpower (480,000 Germans stood against the 850,000 Franco-British troops).  Waiting for the Americans would be a fool’s errand, as Nivelle correctly assessed that the Americans wouldn’t arrive in sizable numbers until early 1918, at best. With Britain’s offensive at Arras still going ahead, and no adequate counter plans having been offered by the offensive’s many internal critics, the operation would go forward nonetheless.  “Our hand has been forced,” the newly appointed French Prime Minister Alexandre Ribot declared.  “It is too late to go back.”

Nivelle had promised the entire offensive would only cost 10,000 French casualties.  By the end of the first day of fighting, 120,000 French and British soldiers were dead, wounded or captured.

True to Pétain’s concerns, the French artillery could not effectively open holes in the German line and thousands of Entente troops found themselves facing fields of intact barbed wire.  While German artillery proved effective against the slow moving French tanks, German machine gunners cut down thousands of troops for modest gains.  The diaries of local German commander spoke of even German troops becoming demoralized at watching the slaughter of Frenchmen tangled in no man’s land.  Yet Nivelle persisted to push his men forward, even as various cabinet ministers begged him to halt the attacks.  Rain had further slowed the offensive, causing ambulances to become delayed returning the wounded to field hospitals – the French ambulance services had only prepared to return numbers closer to Nivelle’s overly optimistic figures and were easily overwhelmed.  Many died waiting for medical help. British troops await at Arras for their role in the Nivelle Offensive – the British would lose 160,000 of their own men in the campaign, all for only 148,000 German casualties

Despite the monumental hurdles – both literal and figurative – French troops had penetrated the German line for miles in some sectors and captured 20,000 of the enemy.  Nivelle was insistent that continued assaults would still produce his original promises, if only his civilian authorities would give him more time.  France’s politicians would allow him to continue; Nivelle’s men wouldn’t.

Reports of men disobeying their orders had surfaced within the first few days of the offensive, but these cases appeared limited and isolated.  But the men refusing to charge into the teeth of German machine gun fire were increasingly mid-ranking officers, not the usual foot-soldiers.  By early May, as the offensive wore out, even higher-ranked officers were now questioning, if not outright refusing, orders to attack.  On May 3rd, 1917, the entire French 2nd Division disobeyed their orders.  It had become clear to the command in Paris that this was no longer a case of exhausted morale – the French army was in mutiny.

Fears of a repeat of events from St. Petersburg consumed all parties.  While the mutinies had yet to turn violent – the average soldier had not turned their weapons on their officers – the growth of soldier-led councils, similar to the soviets (worker’s council) in Russia, fed talk of revolution.  Likewise, rumors spread that Paris would institute decimation punishments against mutinied units – the killing of one man for every ten.  Whatever faint trust remained between France’s soldiers and officers had disappeared.

An execution of mutineer in Verdun – 1917

Within weeks of the first cases of mutiny, 49% of all French army divisions were reporting some form of rebellion with 27,000 known deserters and thousands more unaccounted for.  Nine divisions had been completely compromised; some French towns close to the front had been “liberated” by rebellious units as divisions broke down into drunken looters.  Socialist and pacifistic literature had been found in numerous trenches while nervous French intelligence overplayed the role of Russian units as a source of revolutionary fervor.

Nivelle had no answer to the mutinies, having lost the trust of his men, military contemporaries and civilian leadership.  As French reserve units refused to march to the front and the risk that the scale of the mutinies might reach the press increased, France needed a genuine national hero to preserve what remained of the Third Republic’s armies.

History would record Gen. Philippe Pétain as meeting the mutineers with compassion and mercy following his appointment as the Chief of the French General Staff on May 15th, 1917.  In reality, Pétain wielded both the carrot and the stick.  Thousands of rebellious French soldiers were arrested, with over 3,000 courts-martials being applied.  629 troops were sentenced to death for their roles in the mutinies, with thousands more finding themselves serving hard time among France’s brutal overseas penal colonies. 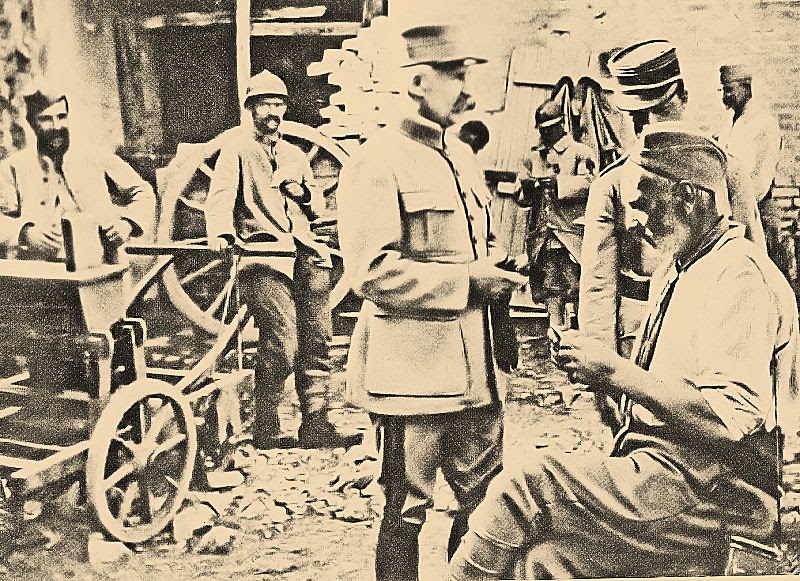 Yet most of those awaiting execution found their sentences commuted.  In the end, only 43 French soldiers would be shot for mutiny.  Pétain began an aggressive listening campaign, touring the trenches with promises of longer leaves and smaller offensives conducted only with the support of overwhelming advantages of artillery and manpower.  The aging general summarized France’s new strategy: “J’attends les chars et les américains” (“I am waiting for the tanks and the Americans”).

The deadlock that had defined the Western Front since late 1914 had now been fully embraced by both major combatants.  For Germany and France, a permanent defensive posture was preferable to sending thousands more to die for bit of territory.  Only Britain appeared to be still invested in trying to claw out gains amid the mud and blood.  For the foreseeable future, the outcome of the Great War would now rest on events in Russia and America.