“So what is it that makes half of Trump supporters so ‘deplorable’, to put it in Herself’s own words”, I ask some of my “progressive” friends.

Is he anti-immigrant?  Well, anti-illegal-immigrant, yadda yadda, sure.

And there’s a shopping list of other complaints.  And I may even echo a few of ’em.

But the one I hear – whispered conspiratorially, as if they’ll get spanked if they’re heard saying it – is “some of them are birthers“.

To which I respond “Then he’s in splendid company”.

The screen grab below is from a 2007 memo from Clinton strategist Mark Penn, essentially urging her to go “birther” on Obama, who was still well behind in the polls. 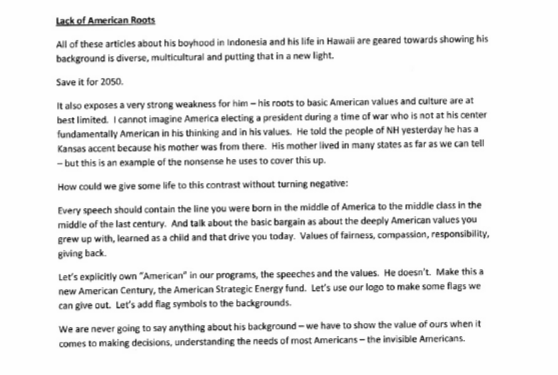 Clinton was the original “birther”.

Oh, the “fact check” industry among the media’s pet Democrats says it’s not true – by dint of the fact that Hillary has never physically been busted at a Birther rally, herself, in person.

But even “Factcheck.org” admits that it was Herself’s supporters who were the original…

48 thoughts on “Deplorable Her!”