To:  Everyone in Northern Minnesota
From: Mitch Berg, Uppity Peasant
Re:  Your Congressional Representative 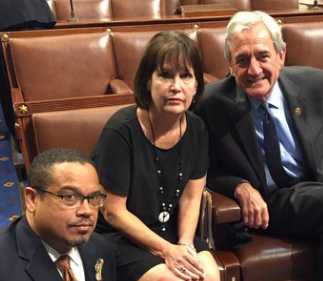 It was taken this past Wednesday, as he participated in a “sit-in” on the floor of the House, in favor of a bill that would have gutted due process by allowing the government to bar firearms from anyone on a “terrorism watch list” that government can put people on with no due process, no accountability, and no recourse.

All government has to do is put your entire group – pro-lifers, hunting rights groups, even union activists – on the “watch list”, and boom; no guns for you.   And there’s nothing you can do about it.

Just like in the Soviet Union, Saudi Arabia, or any banana republic.

This is what Rick Nolan is spending his taxpayer-funded time and money on in DC; pretending that you, the people of CD8, want this country to turn into a banana republic.

Remember this in November.