Rep. Kim Norton is going to come for your guns this session.

It may not work, but it’s the next measure in what Big Left hopes to make into a steady drumbeat that eventually wears the great, underinformed middle down on the issue.

But the facts are out there.

Location, Location, Location:   If you live in Minnesota, you know that North Minneapolis is the state’s little Oakland.  While Minnesota as a whole has a murder rate of 1.6 per 100,000 people, the North Side’s violent crime (about 30 murders last year, in a population of under 40,000 people) teases out to a murder rate of 75/100,000 – higher than Venezela, double that of Columbia.

Of course, Minneapolis (and Hennepin County in general) has among the lowest legal firearms ownership rates in the state:

So if the left’s conceit  – less guns (in the hands of the law-abiding) equals less crime – would seem to predict a nice, low crime rate in Minneapolis.

But the MinnPost ran a piece earlier this week – and for starters, it confirmed what everyone already knew; the North Side is a shooting gallery, at least judging by the MPD’s “Shot Spotter” system. 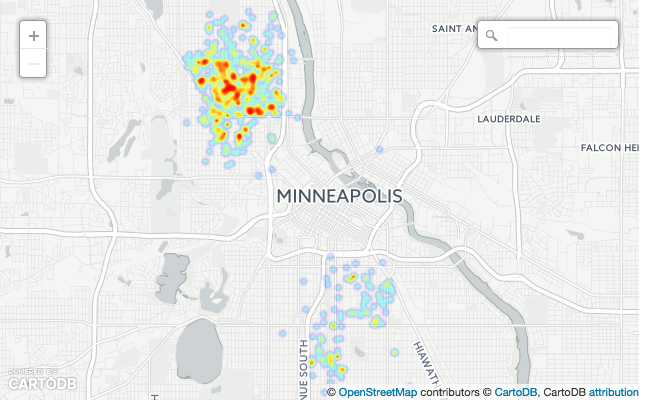 There’s a faint dribble of shooting in the “Phillips” neighborhood (between Franklin and Lake, east of 35W and west of Hiawatha), and some in the central core of the south side between 35W and probably Chicago (and just so we’re accurate, here, the shot-spotter microphones are only installed in high-crime areas; we don’t see shots fired in Linden Hills or along Minnehaha Creek because there are no microphones in Linden Hills or along Minnehaha Creek.  But there are no microphones there because, objectively, there really isn’t a big “gun violence” problem there.  Or Nordeast.  Or by Nokomis. Or even on Lake Street east of Hiawatha or much west of Nicollet.

More telling?  Shooting has been trending down on the south side for the past six years: 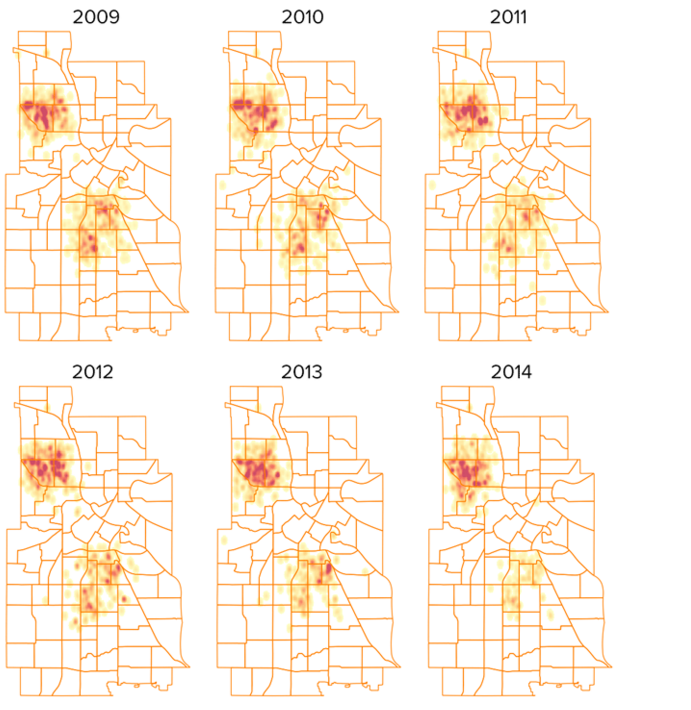 Even the NYTimes knows that North Minneapolis is a free-fire zone:

But as Willesha Moorehead, who came here from Chicago a dozen years ago, can attest, struggle is baked into its streets.

Seven of her friends or members of her family, including the father of her first child, have died from gun violence in North Minneapolis. She has struggled to get work, in part because she could not find child care for her two daughters, she said. And for the past three years she has bounced between the homes of friends and family because she could not find affordable housing.

The problem, the NYTimes seems to imply, is that not enough money gets spent on the North Side:

Public transportation is poor, residents say, and though local officials are planning to spend more than $1 billion on a light-rail line, North Minneapolis residents have been critical because it will run through downtown and the suburbs but skirt their community.

So clearly, the answer is to crack down on guns in the hands of law-abiding citizens in Northeast and Saint Paul and Anoka and Thief River Falls.

That should solve it.

The real problem?  The government has been using the North Side as a warehouse for the poor for a couple of generations now.  The city has been fine with that – they’re a nice pool of captive DFL voters – but now, the social consequences of keeping a bull pen full of dependents is catching up with the city.