Today’s Columbus Day.  Which, to me, is the 30th anniversary of the day I set out to move from my hometown of Jamestown, North Dakota to the Twin Cities…

…and failed.  Long story, which I told here about ten years ago.

It was October of 1985.  I’d graduated from college almost six months earlier – and, as they say, “failed to launch”, at least immediately. I’d worked on a roofing and siding job, and at a bookstore, and put some money away as I’d tried to figure out what I was going to do after college – until I made the decision in a bout of drunken whimsy two weeks earlier.

I’d loved college, by the way.  I’d worked hard – averaged twenty credits a semester, graduated with a BA and three minors, and done a lot of stuff; so much that I’d neglected to make any plans for life after college.

My college years had had a few definitive experiences; I’d become a conservative (spurred on, incredibly, by my English professor); I’d learned for the first time that while I was a geek and a nerd, that the choice not to be a hapless loser was in fact mine; that I enjoyed communications in all their various forms.

And singing in the Jamestown College Choir was one of the most unforgettable experiences of my life. 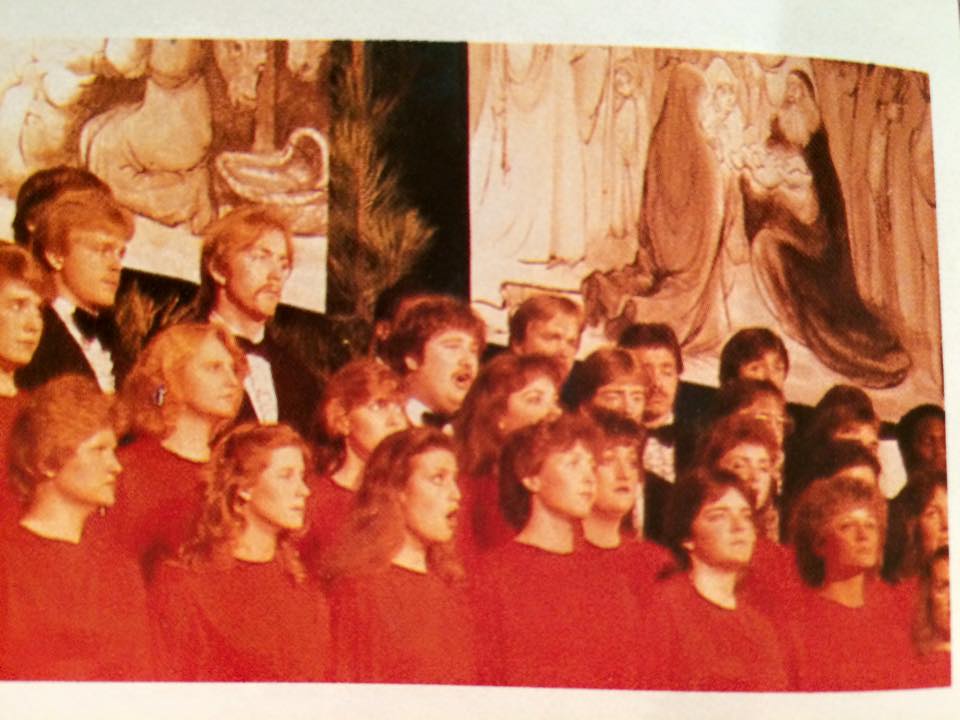 In my four years, we’d toured from coast to coast, and to Europe. That’s us, in Washington, DC, my Freshman year.

I‘ve written about it before, in one of the best-received posts in the history of this blog.   I made a lot of close friends, and had some amazing experiences.

But thirty years ago this week, that was over and done with.  It was time to start the next chapter.

Over the next thirty years, a lot of things changed.   I’ve had three careers, three bands, a marriage, two children and a stepson, a couple of sets of friends, and a hobby or two – including this blog, and the show.  I’ve been to some high school reunions – I come from a very close-knit high school class.

But I’d never been to a college reunion.

The place bounced back, first from the brink of oblivion with the aid of some deep-pocketed alums, and then to a reputation as an excellent regional school, thanks to a couple of excellent presidents.  It’s more than doubled its enrollment since I was a student, and finally sprouted a sub-campus in Fargo and changed its name to University of Jamestown.  (And while it participated in the education bubble, it’s actually considerably less expensive than comparable private schools in Minnesota, and a very good value for the money, especially for those majoring in nursing and health care, pre-med and hard sciences, computer science and education).

Anyway – about two years ago, a couple of my choir-mates from the class of ’85 said we should aim to get together over the fall homecoming season.  And by golly, we did it. 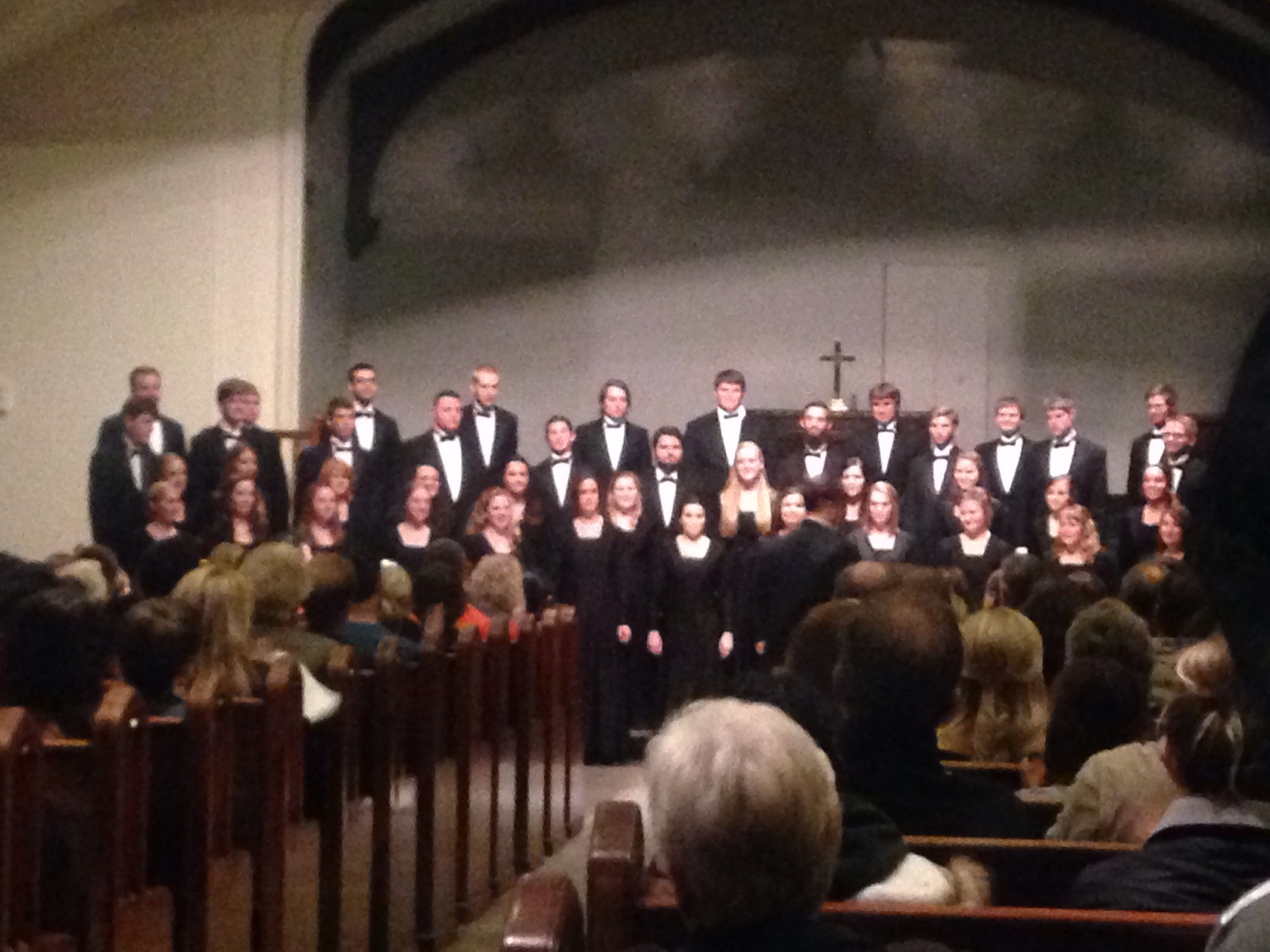 The choir today. A little smaller, a lot less crimson.

Tempus Fugit:  The weekend kicked off – for me, anyway – with a homecoming concert.

Surprise; the new tradition is for the choir to invite all choral alums to join the group to sing a song (one that the choir does roughly every two years, presumably so alums will have a song we all know).   So for the first time in thirty years, I got to sing in the choir.

I’m not an emotional guy – but that was pretty unforgettable.

And then it was off to an evening of carousing as only a bunch of people who’ve been out of college for thirty years can carouse.

And the next day, the homecoming game.

One are where Jamestown’s slipped a bit is in the football program; perennial NAIA Division 3 contenders when I was in school, it’s fair to say the Jimmies are rebuilding; they got taken to the woodshed by Dickinson State 51-7.

But we didn’t really care.  It was a fun day: 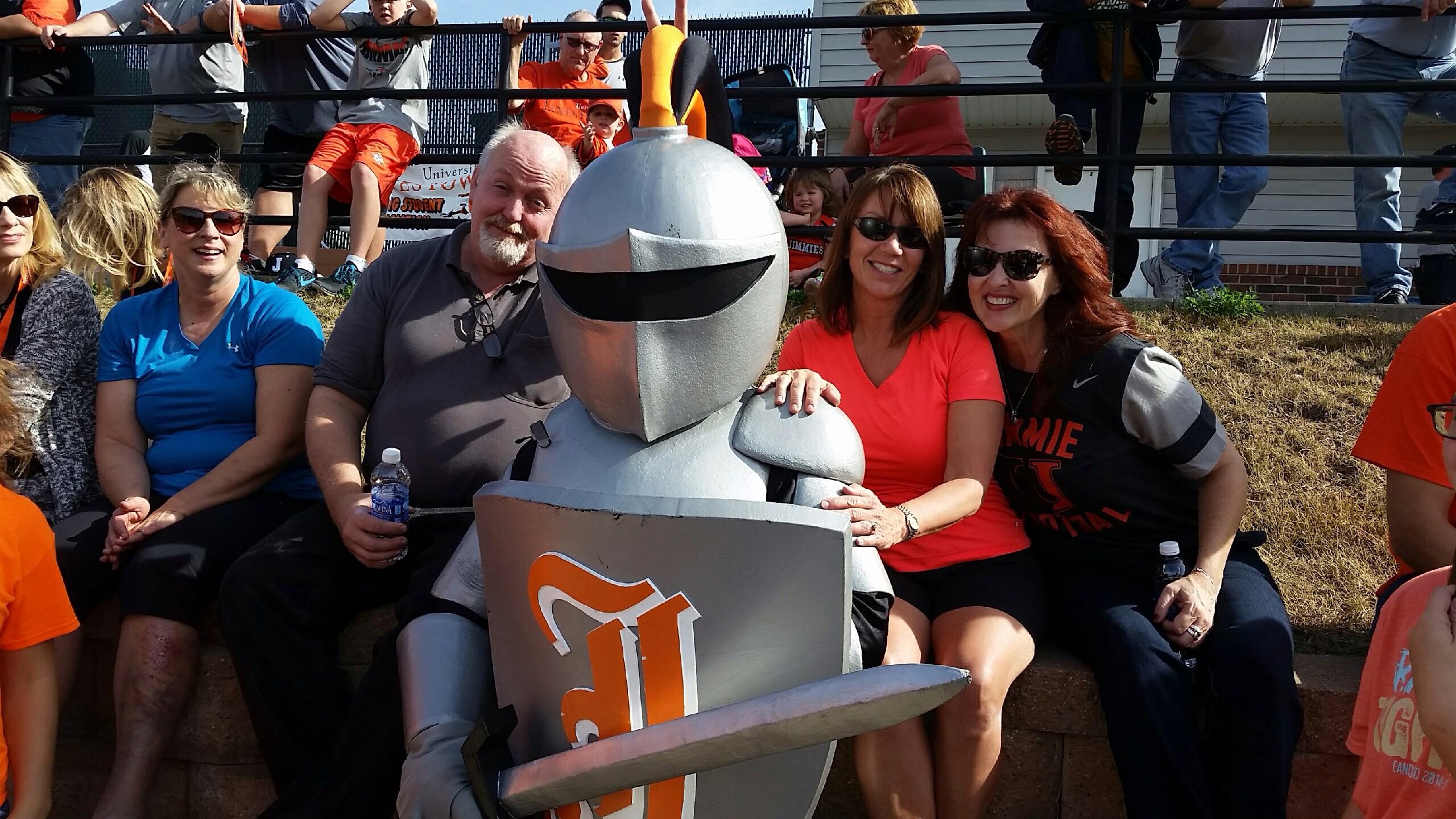 My classmates, our mascot, and me: (From L) Lisa, Roxanne, me, Sir Jimmie, Beth and Karen. Yes, there’s something in the water up there; all the women from my graduating classes, both high school and college, remained pretty spectacular.  And no, scenes like this never happened in college.

So it was a fun, fun weekend.

And yep, there are some lessons.

Foreman Says These Jobs Are Coming, Boys…:  When I left Jamestown, it was depressed, and depressing. 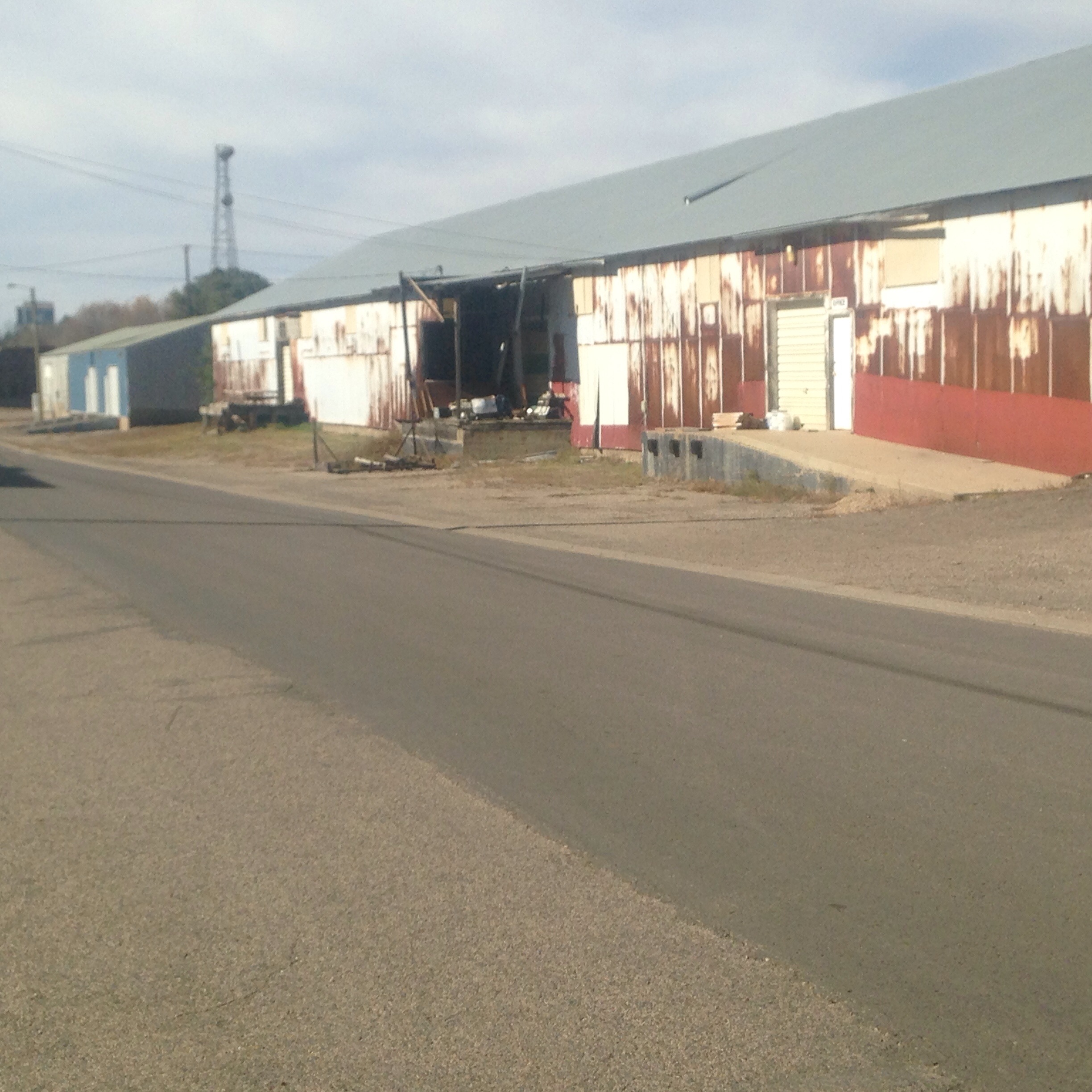 A building along the tracks in Jamestown. I don’t think it’s been painted since I left town.

It seemed like half of the houses in the city were for sale in 1985, and weren’t finding any takers.  Main street was basically moribund; the K-Mart up on the south hill was eating all the business. 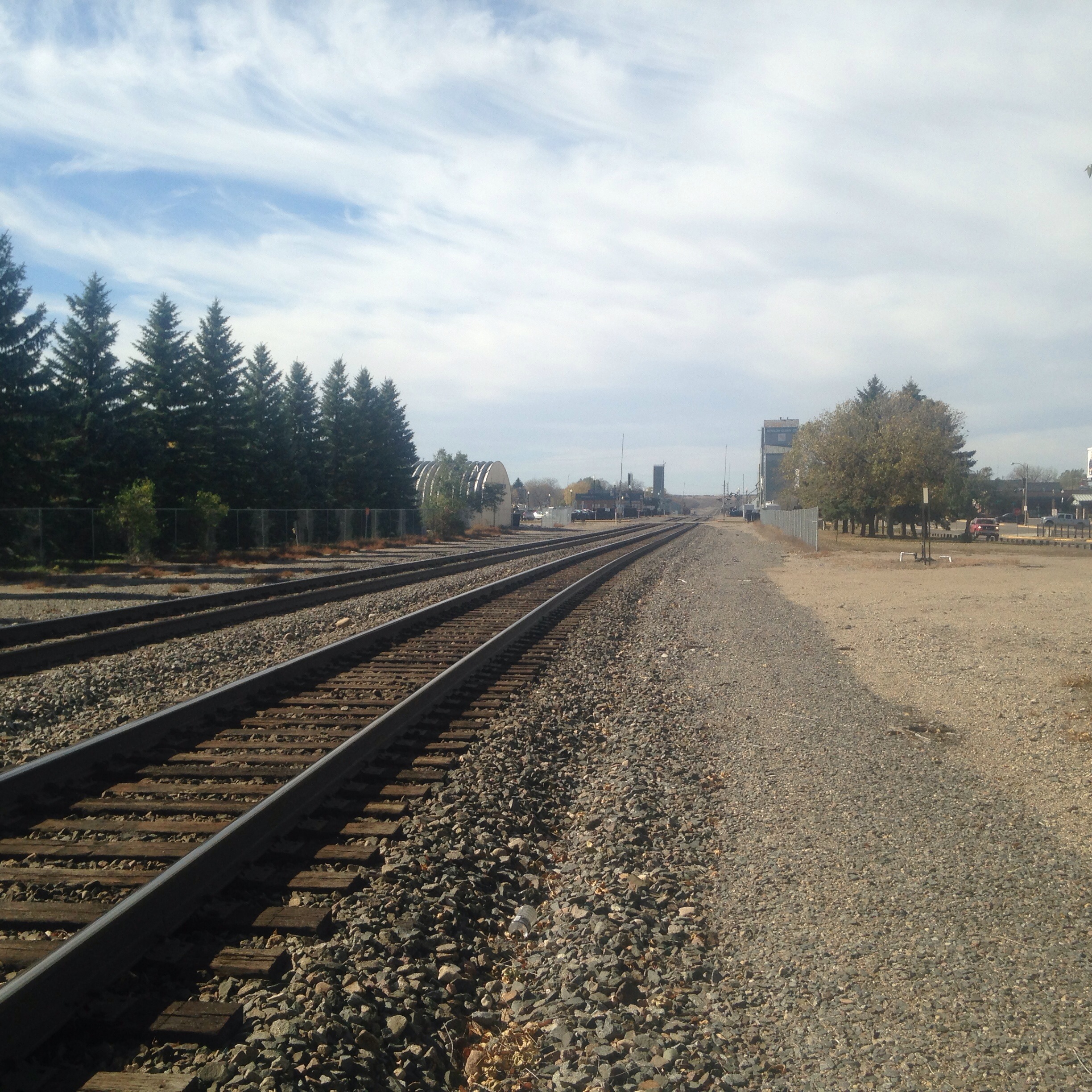 But today, mainstreet is, if not “booming”, at least pretty fully occupied; the KMart that drove most of main street out of business has itself been extinguished by a 24-hour Walmart up on the south hill; main street has backfilled with businesses covering niches that Walmart and TSC and Mac’s don’t; little specialty stores, furniture stores, a coffee shop, a few new bars replacing the old railroad bars that used to dot downtown, a restaurant that’d probably fit in in the Twin Cities. 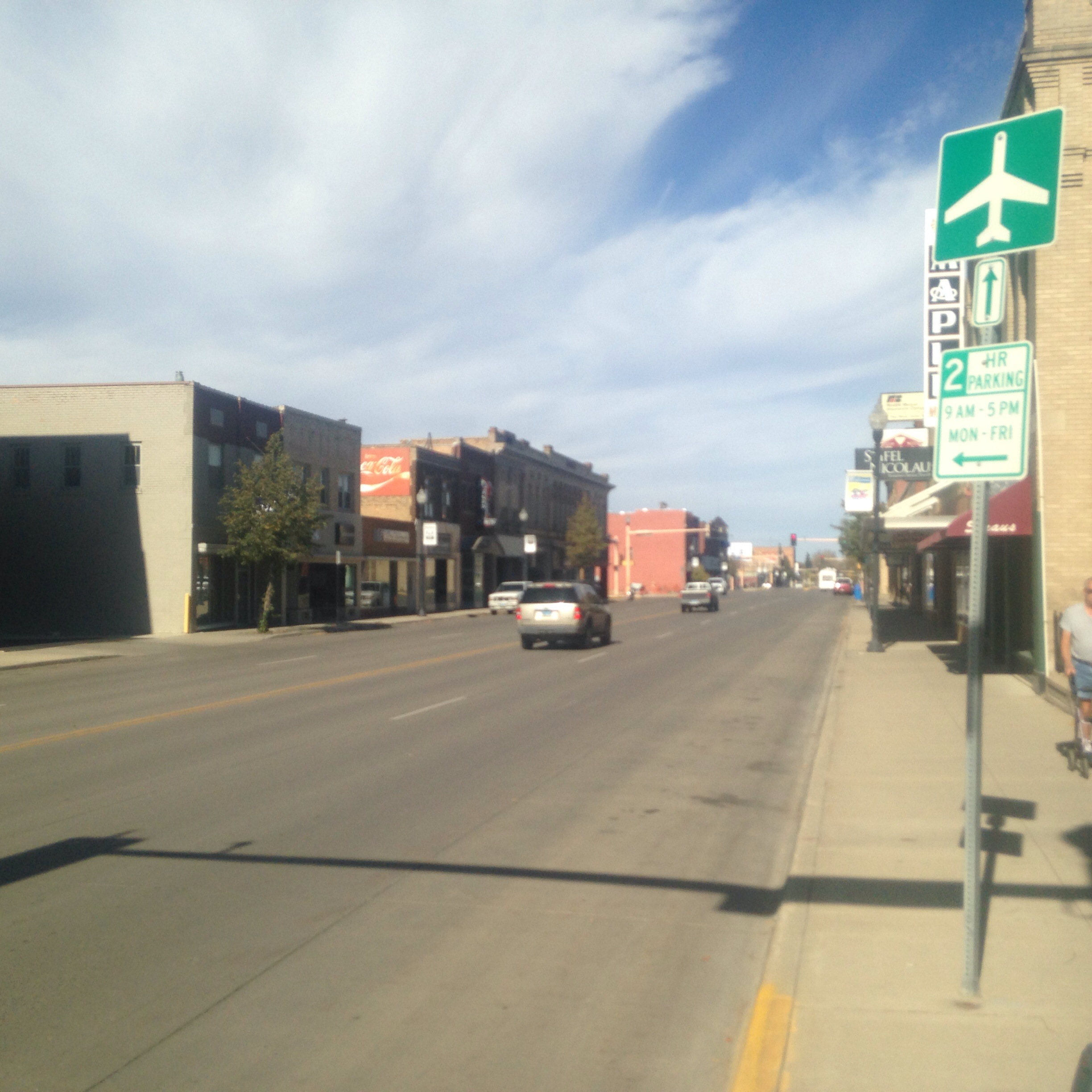 Which is more than you could say for it in 1985.   One of the reasons I left the town – other than “wanting to start a life of my own” and “wanting to move to place where it was a least hypothetically possible to make a living doing something having to do with a BA in English and a thing for music” – was that it was hard to find even a minimum-wage job.

And it still is.

But not like it is in rural Minnesota.  The most common sign in town?  “Help Wanted”.  Walmart is hiring night stockers for $14 plus per hour, with benefits.  Gas stations are advertising for cashiers starting around $10 per hour, with a $2,500 bonus after a  year. 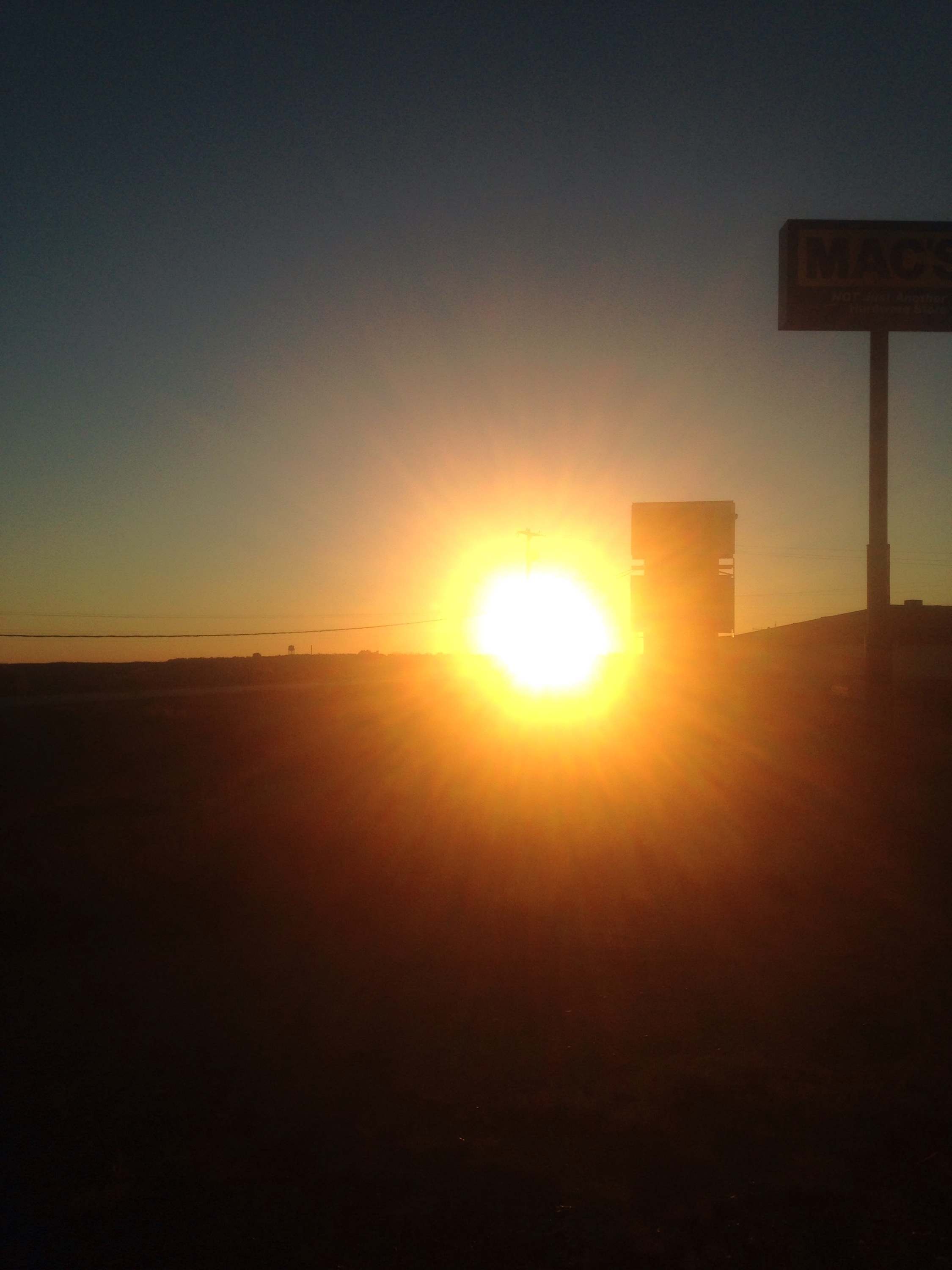 A metaphor for the change in my hometown’s fortunes? Or just a great shot that grabbed me by the collar and said “I dare you not to take this picture”? Why choose?  Anyway – it’s a North Dakota sunrise, Sunday morning.

You’d have to make a special effort to find a job that pays only minimum wage.

Bear in mind – Jamestown’s not in oil country.  It’s about 150 miles to the nearest production oil well, and 100 miles to the closest petrochemical business.  And you have to go 90 miles east to get to the espresso-chugging high-tech gully in Fargo.  The prosperity in Jamestown is a little more mundane; a potato processing plant, a malting barley plant, a bunch of light manufacturing, lots of agribusiness (times are good!), some new industrial developments, a correctional facility, and the University itself.  The town’s population seems to have jumped from the 15,000 it’d been stuck at for sixty years, to possibly as many as 20,000.

The best “living wage” is prosperity.  Someone tell the DFL.

Anyway – I’m looking forward to my next high school reunion next summer – and, God willing, another choir get-together soon.

And it’s fun to go.  Because I love the smell of competence, free markets, and prosperity.

Title Credit:  One of my favorite songs of the era when we were doing all that studying and singing:

2 thoughts on “A Sort Of Homecoming”