As a site, it was hard to miss the marching of the 4th German Cavalry Division on August 12, 1914.  Wearing the spiked Pickelhaube helmet, with steel lances and breastplates, and freshly-polished swords, the 4th Cavalry could have easily looked as if on parade.  Only instead of parade grounds, the men and horses of the unit marched through enemy Belgian territory.

Ordered to charge against the southern flank of the small town of Haelen, the 4th Cavalry squared off against a fellow cavalry unit, equally resplendent in their dress uniforms.  The 4th Cavalry led, quite literally, with the tips of lances.  The Belgians, dismounted from their horses, led with their guns.  The gentlemanly charm of the 19th Century military was about to collide with the vicious precision of the 20th.

Speed had been the essence of German military planning for a war in Europe. The infamous Schlieffen Plan had counted on Germany making light work of French forces, defeating them in 40 days and occupying Paris.  With Germany now confronted with a two-front war against the expansive Russian Empire, the German General Staff knew their only long-term hope was a decisive blow against France.  The two-front war had already undermined the principles of the Schlieffen Plan – instead of the 1.3 million troops Schlieffen had deemed the minimal necessary to conduct his operation, von Moltke had only 970,000 at his disposal.

Worse for Moltke, if the French understood the German intention to drive around and between their lines of communication (a sort of 1914 blitzkrieg, if you will), they could potentially retreat to the Verdun–Marne–Paris defensive axis and hunker down for a protracted fight.  Thus, the German army had no time to suffer fools in Belgium.  The longer the Belgians stood in the way, the more likely Germany’s plans would come to naught.

The result was a General Staff desperate for results, and willing to overlook (or even encourage) brutality against Belgian civilians. 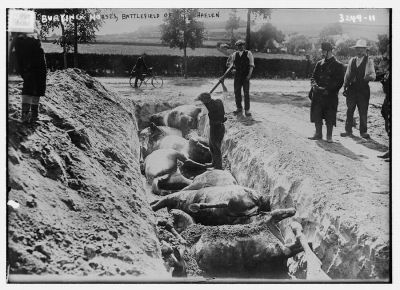 Nearly 1.5 million Belgians (almost 20% of the country’s population) fled the German advance.  Those who remained were a mix of the young, the old, and women.  A few Francs-tireurs (“free-shooters”) also stayed behind to harass the German line with sniper attacks and sabotage.  The moves had little effect on German progress.  But the German response had a massive effect on world opinion.

Throughout the many small towns doting Belgium, German troops launched reprisal attacks on civilians wherever they faced unexpected resistance.  Some were killed amid the “fog of war” as German troops in 1914 faced the same confusion modern soldiers do to distinguish between a civilian and a guerrilla fighter.  But other acts were certainly orchestrated.  Faced with a destroyed railway, which was putting the Germans further behind schedule, German General Count von der Goltz ordered retribution comparable to the Nazis.  Every village within miles of the sabotage was burnt to the ground, their mayors lined up and shot, and all able-bodied males captured.

The “Rape of Belgium”: German war crimes in Belgium rallied world support against the Kaiser. While some acts were fabricated, others (such as purposeful burning of the city of Leuven) were as horrific as anything the Nazis would commit a generation later

The Germans called it “British propaganda” but in truth, the “Rape of Belgium” was being more systematically conducted than not.

The campaign of carnage was likely totally unknown to the men of the German II Cavalry Corps.

The Corps had been delayed a week due to the lack of oats for the horses.  And despite time being of the essence, the unit lumbered, like so much of the German army, through its assigned route.  The II Cavalry Corps was considered a reconnaissance unit, scouting out Belgian positions in the hopes that weak points could be rapidly exploited.  And the II Cavalry found a major potential weak point at Haelen.

Ypres, Belgium: the city would be the scene of 5 different battles from 1914 to 1918. This picture in 1919 shows the level of destruction visited upon so many Belgian cities caught in the crossfire between the Entente and Germany

One of the major crossing points for the River Gete, Haelen also represented the extreme end of the Belgian army’s left flank.  If the Germans could turn Haelen, they could get behind the entire Belgian army – and Haelen was practically undefended.  The Belgians, seeing this vulnerability, immediately sent cavalry commander Lieutenant-General Léon de Witte to Haelen to hold the bridge and block any German advance.  Unfortunately for de Witte, the Germans had already noticed Haelen’s lack of a garrison, and 6,000 men from the II Cavalry, 4,000 of them on horseback, were rushing to cross the bridge.  De Witte would have to hold the line with less than half that number.

For a moment, it looked like Belgium might see the sort of true cavalry battle last witnessed in the Napoleonic era.  De Witte, the old cavalry hand that he was, wanted to meet the II Cavalry Corps’ Georg von der Marwitz on an open battlefield – horse vs horse.  The Belgian General Staff thought better of it, and advised de Witte to dismount his unit and hold the line instead of attacking.  Cavalry was suppose to be on the offensive, not defensive.  But de Witte was nothing if not a dutiful soldier, and obeyed his orders. Belgian troops after the Battle of Haelen.

Marwitz advanced on August 12th, 1914 with a direct charge into Haelen.  Belgian engineers blew the bridge, the main objective of the town, but didn’t completely destroy it, allowing the Germans to get at least 1,000 men into Haelen.  But de Witte had chosen to conduct the fight outside of the town, in an obstructed defensive position.  Marwitz, unable to see the strength of the defenders, charged with his cavalry.  Men with lances were shot down by machine-gun fire.  Horses became tangled in barbed wire near the Belgian lines and panicked, throwing riders or shredding themselves before gunfire finished the grisly task.  Marwitz managed to bring up his artillery, but with de Witte’s men well covered, the shells hit dirt and sometimes, German horses.

By the day’s end, Haelen was littered with Pickelhäube (some of which still reside in Belgian museums, lending to the battle’s name to the Belgians as the “Battle of the Silver Helmets”) and 750 dead or wounded Germans.  400 dead horses and 300 captured troops added to the II Cavalry Corps’ defeat.  The centuries of cavalry power, at least on the Western Front, could not exceeded the killing power of machine guns and well-defended marksmen.

A Belgian sentry stands watch over the ruins of Haelen. A tactical victory for the Belgians, the victory was short-lived as the Germans managed to occupy most of the country and established their own military government

Haelen marked the end of many illusions.  The Germans assumed Belgium could be easily swept aside en route to crushing France, or that cavalry could still play it’s traditional role of mobile warfare, outflanking and surrounding the enemy.  Both sides, at least among the cavalry corps, believed some amount of chivalry accompanied their profession.  But bedazzled soldiers executing civilians and raping women were no more noble than conscripted grunts in drab army clothes.

8 thoughts on “Battle of the Silver Helmets”