This blog very rarely endorses political candidates; I believe the practice of media outlets endorsing candidates is much more harmful than good, and I think I’ve done it twice in fifteen years, only in circumstances that were dire enough to warrant it.

And those are the circumstances today.

Minneapolis is holding a mayoral election – one of the more important in its history.  There are quite a few candidates in the running.   But only one of them is exactly perfect for Minneapolis at this stage of its history.

Shot in the Dark endorses… 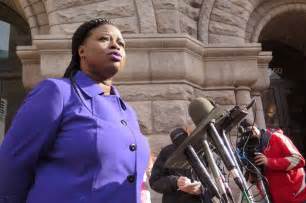 It was a long, hard decision, choosing Levy-Pounds over Ray Dehn; it was a close call.

Minneapolis is pretty much a doomed city.  Even as the city’s business sector is floundering in taxes and regulations, the idiot City Council has poured on more regulations, mandatory sick time, an artificial hike in the minimum wage, and much more.  Crime in North Minneapolis is rising even as the rest of the state becomes dramatically more peaceful – while Minneapolis’ government, the council and Mayor, divert themselves with social justice fripperies and virtue-trumpeting.

In most of the country, this sort of aimless dithering would be rewarded by a voter uprising and a turnover in government.  But Minneapolis is a one-party city; most Republicans, outside of a plucky defiant minority, have moved to places where productivity and actual freedom are appreciated.

Since a political solution is out of the question, the market will have to do the job.  The sooner the better.

For the good of the whole state in perpetuity, Minneapolis must collapse under the weight of its three-generation-long marinade in “progressive” politics.  It must go bankrupt; it’s residents must feel the full pain of the consequences of their decades of delusion.

And while Ray Dehn promises to bring that collapse in a huge hurry, Nekima Levy-Pounds will add to it  a level of angry, conspiracy-mongering racism that wijll accelerate things, and nauseate the small residue of remaining Minneapolitans of all races with any sense of morality to either move or fight for real change.

And so I endorse Nekima Levy-Pounds