Further evidence of the statement “”Protect” Minnesota has never – not once – made a statement that was simultaneously substantial, original and true” came to us yesterday in the form of a press release from their “Research Director”, the onimatopaiec Richard Gigler. 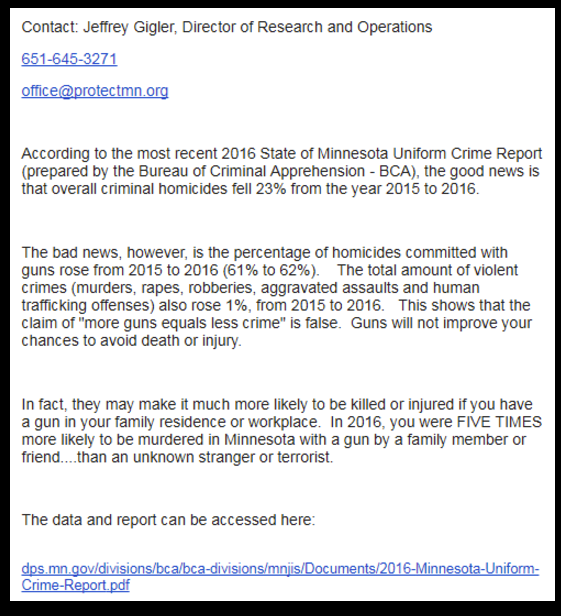 Gigler is reading the same numbers I related to you a couple weeks ago, showing that crime has dropped sharply across Minnesota in the last year.

But the takeaway from any given type of evidence depends on a lot of things; in this case, whether one is inept at statistics, or one represents a group that pathologically lies about gun owners and knows their audience isn’t smart enough to know they’re being lied to.

In this case, as “evidence” that “more guns don’t mean more safety”, Gigler notes that the percentage of homicides committed by guns “…rose by 1%”   Of course, they didn’t; they rose by two thirds of a percent, and even that is a statistical anomaly caused by the drop in overall homicides, not a hike in gun homicides (which, as we noted, dropped 23% in the past year!).

But the lie-via-incompetence is worse than that – because the number of homicides dropped, and the percentage of homicides involving a gun “rose” as a fluke of statistical background noise…

Meaning that the percentage of guns used in crimes dropped.

Why do you suppose it is that “Protect” Minnesota can’t tell the truth?