Americans can be — and often are — everything our critics say we are: impulsive, vulgar, oafish, clumsy, greedy, vain, belligerent, sanctimonious, hypocritical. But we are something else: a catalyst. 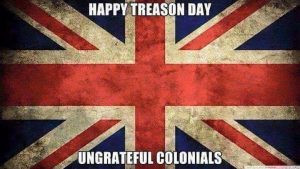 We’ve had 241 years of hit-and-miss government, but imagine going back to 1776 with a prophecy that one day, in the not-too-distant future, the English, French, Germans, Spanish, and Italians — to say nothing of the Israelis and the Japanese and the Indians — would form a restive and sometimes turbulent but enduring alliance against tyranny and oppression, and that this alliance would be loosely and imperfectly organized around something like the ideals ratified on July 4, 1776.

We have our political, economic, and religious disagreements with our friends and allies, but everywhere in the world where people fight against tyranny, we hear an echo of 1776. Everywhere in the world where people risk everything they have to tell the king, führer, caudillo, secretary general of the central committee, dear leader, ayatollah, or president for life to kiss their asses, we see something of ourselves. When things get bad enough, we join in, and have spent untold blood and treasure in the pursuit of other people’s liberty. Why? What’s in it for us? It is in our nature. We aren’t our politics. We aren’t our government or our president or even our Constitution, which is subject to revision from time to time. We are the people who decided that rather than just change kings, we’d do away with kings altogether under the radical theological premise that all men are endowed by their Creator with certain unalienable rights, irrespective of the king’s good opinion.

Read the whole thing when you get a moment.