He’s the “writer from Rochester” who wrote the infarmous op-ed in the Strib last year telling fellow (what else?) liberals that it was OK, even necessary, to expunge all Trump voters from  your life and social circle.

Rochester?  You Owe Us An Apology:  Scott has a writing style reminiscent of a junior high girl writing Sylvia Plath fan fiction while listening to Goth-teen music.  And that’s the best thing I can say about him and his writing.

But he’s gotten another op-ed in the Strib, which makes me think that the Strib must be getting paid by some government program to employ otherwise unemployable writers.  Or maybe that Scott saw some senior editor in bed with a live boy or a dead girl.

Now, I’m not writing you to “fisk” Scott’s op-ed – entitled  It’s the guns, stupid. But that doesn’t affect you, right?” in the hyperventilating, “everyone’s a hypocrite!” style that’s become so popular among the snowflakes.  The article – which is little but a bunch of “Everytown” chanting points gurgitated with no more critical analytical thought than my dog puts into fetching my shoes in the morning – isn’t worth my time; I’ve it a million time.  I’ll blow through its most egregious offenses later.  Probably.  It’s almost too stupid to bother with.

Not Even Punching Tickets Anymore:  It’s been a pattern at the Strib for decades, now.   If you’re anti-gun – no matter how dim, fact-free and risible you are (Heather Martens, Nancy Nord Bence and their ilk seem to have an open invitation to write any time they want) or even the dreary Scott – you can pretty much measure the curtains for your byline.

Dissent?  Well, other than a few letters to the editor from “Fudds” seemingly chosen for their half-literate irascibility, the Strib will not publish an op-ed, no matter how good – especially, I suspect, because it’s good.

So who did the Strib pass over for including in the op-ed section?

My friends at the MN Gun Owners Caucus have been diligently trying to place an op ed – any op ed – challenging the flood of anti-gun drivel that romps and plays in the Strib’s op-ed section.

Among them was this piece by Sarah Cade, a shooter and activist.  Also   She wrote a piece in defense of HF238 and HF188 – the “Self-Defense Reform” and “Constitutional Carry” bills that were introduced this session (and, shamefully, died).

I’m going to publish her submission to the Strib in its entirety – because someone has to.  Judge for yourself which is a more worthy effort:

Minnesota desperately needs common sense gun laws – just not the ones you might think. Bills HF238 and HF188 sought to remedy unreasonable components of the current system, but were not included in the public safety omnibus.  These bills should be included as amendments. 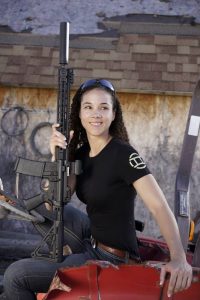 HF238 included a provision commonly known as “stand your ground.”  Stand your ground laws serve an important purpose for communities of color: they defend the innocent from overzealous prosecution. Ideally, a self defense claim should center on whether your use of force was reasonable under the circumstances, not on whether you could run faster than your attacker or whether you memorized the blueprints of the building before making the split second decision to defend your life.

Stand your ground removes the requirement to prove you could not retreat in court.  Rather than forcing you to prove a negative, it places the burden of proof where it belongs: on the state. The concept that a person is innocent until proven guilty is a cornerstone of American justice – or at least it’s supposed to be.

In reality, exercising your right to self defense leads to further victimization by the legal system. As a person of color, I know that racial stereotypes make a judge and jury less likely to give me the benefit of the doubt than my white peers. I also know that the legal system will attempt to intimidate me into taking a plea bargain for a crime I didn’t commit. These problems are compounded if I’m poor, don’t know my rights, or can’t obtain competent defense.  Stand your ground laws help protect me from a system that chews up and spits out people who look like me.

Contrary to the misinformation put out by Minnesota’s leading gun control group, stand your ground does NOT allow you to shoot people for wearing a hoodie, it does not allow people to “shoot first,” and it does not allow people to shoot anytime they feel subjectively threatened.  In fact, it’s hard to repeat those statements with a straight face if one has even a passing familiarity with Minnesota’s byzantine web of self defense laws (although they helpfully make the point that our laws need simplification and reform so laypeople can understand them).

Stand your ground would not change the requirement to act reasonably. Just like under current precedent, in order to present a valid claim of self defense, a person must have BOTH an “actual and honest belief that he or she was in imminent danger of death or great bodily harm,” AND “the existence of reasonable grounds for that belief.” (State of Minnesota v. Baker 1968)

“The lack of a duty to retreat does not abrogate the obligation to act reasonably when using force in self defense.   Therefore, in all situations in which a party claims self-defense, even absent a duty to retreat, the key inquiry will still be into the reasonableness of the use of force and the level of force under the specific circumstances of each case.” (State of Minnesota v. Glowacki 2001)

Despite overblown claims of racism, stand your ground is not in itself a racist law — mostly because there’s nothing to enforce. Instead, it is a DEFENSE that is invoked to protect the rights of an individual in court. It helps people of color defend themselves successfully from a predatory legal system that is stacked against them at every level, from arrest to sentencing.

According to data collected by the Tampa Bay Times, stand your ground provisions are more likely to be used to successfully defend black people than white people.  Black people are 16.8% of Florida’s population, but make up 33% of SYG acquittals, while white people are 77.7% of the population, but account for only 56% of acquittals (note that the homicide rates for blacks did not increase, so this discrepancy is NOT due to the myth of suspicious whites shooting first. Instead, it means more blacks are avoiding unjust prosecution).

As a person of color who is also a gun owner, I know that HF238 and HF188 would help me, and people who look like me, to protect ourselves. I know similar provisions are common in other states (the majority of states have some version of stand your ground; over ten have permitless carry), and that the hysteria about these laws is fueled by fear rather than rational analysis.

I also know that our justice system is plagued with racial inequality at every level. Stand your ground doesn’t change that, as it’s outside the scope of one bill to solve such pervasive problems. However, it does help defendants of color avoid unjust persecution, and that’s a step in the right direction.

Sarah Cade is a competitive pistol shooter and a volunteer Team Leader for the Minnesota Gun Owners Caucus.

So let’s get this straight.  The Strib spiked Cade’s well-written, reasoned, impeccably researched article upending the left’s narrative on the gun issue, but published a rank, uninformed recitation of fallacious chanting points by the mopey Plathbot Paul John Scott.

Want better from our media?  Absolutely.

I’ll deal with the few points in Scott’s little outburst that need addressing below.

And Now, Paul John Scott’s Wad Of Trash:  I’ll fisk some selected portions of Scott’s piece – just because someone who doesn’t know any better may read this.  However, I’ll be coloring Scott’s copy all brown, to at least metaphorically suggest the fecality of its essense.

Minnesota issued more than 71,000 permits to carry a firearm in 2016,…That’s 7 percent of the adult population in this slow-moving stockyard of ours who are feeling lucky when it comes to their chances of getting the drop on a wiseguy.

With only a small portion of new permit-holders living in Hennepin and Ramsey counties, most of the new Minnesotans packing heat live in rural and suburban locales. Welcome to the low-density counties of a state with low crime. Say hello to my little friend.

What in hell is that supposed to mean?

Crime in greater Minnesota – where the people with most of the permits are – is very low.  Doesn’t that mean less Scarfacery?

This is in the Strib, mind you.

The head of a local gun-advocacy group described the rise in concealed-carry permits as the “continued normalization of getting a carry permit,” reflecting an apparent belief among gun proponents that more firearms in public places just makes life more normal.

Which is followed, inevitably, by an absolute failure to show how it doesn’t.

A so-called Stand Your Ground bill…would remove the duty to retreat from a confrontation before firing, and it would allow the subjective determination of a gun owner who feels threatened — serious question: take away all the hunters and is there any other kind? — to be offered as legal defense following the shooting of someone large and unfamiliar on the front porch.

If you read this blog, you know this is baked monkey doodle.  Self-defense is always a subjective determination – a “reasaonble person”, a cop or prosecutor or juror – deciding you  did in fact reasonably fear being killed.  That isn’t changing.

And that the Strib still publishes people who claim otherwise after having repeatedly been set straight is nothing other than journalistic malpractice.

Should Stand Your Ground make it into law, incursions on lawns, garages, cars and campers all become fair game for arguments asserting the right to lethal self-defense. It’s as if the authors of this nihilism were never once children in search of a baseball on the far side of the hedge.

No.  It’s as ifPaul John Scott is parroting Nancy Nord Bence’s chanting points, and the Strib’s editorial page editor has the critical thinking faculties and fact-checking skills of a prairie dog on Red Bull.

With 300 million guns piling up  [stream of consciousness expunged] it seems fair to ask: Are we getting meaner?

Of course we are!

Ask any conservative trying to give a speech at an American university.

But it isn’t the guns.  Stupid.

Because research has demonstrated a so-called weapons effect…Back in 1968, a team from the University of Wisconsin-Madison learned that if you allowed a test subject to give electric shocks to a volunteer who had made him upset, the test subject lit up the guy on the other side of the glass with 20 percent more gusto if you set a gun on the nearby table instead of a badminton racket. The researchers described the presence of guns as aggressive cues, and noted their subjects would insist upon denying that weapons had made them meaner despite ample evidence to the contrary.

Which is fascinating and all, but if it had any bearing on the behavior of law-abiding gun owners, you’d see a lot of vindictive revenge killing on the part of people with no other visible propensity toward that kind of sadism.

But there’s no evidence of this – not here, not there, not in that lab in Madison fifty years ago.

That could explain Stand Your Ground, disliked by responsible gun owners

The rest of the piece doesn’t get any better.  I’m done.

Paul John Scott is a writer in Rochester.

And all your other writers in Rochester oughtta have a word with him.  He’s making you all look bad.