Iowa passed a self-defense reform law in its most recent session, mere weeks ago. Commonly called “Stand your Ground”, what it does is removes the “duty to retreat” – which is really a “duty to remember a lot of state statutes about attempting to disengage” – from the affirmative legal defense for self-defense.

Now, if you’ve followed this blog, you know the continuum of events:

The Des Moines Register and Daniel Finney are no exception.

And I’d like to try to do something about that.  Ignorance is a tragedy.  Let’s stop the tragedy.

It Wouldn’t Be An MSM Article about Guns…:   Finney starts off with some history.

In this case, history of newspaper people’s myopia:

About 20 years ago, when there was an outbreak of shootings in the metro, The Des Moines Register ran a list of tips suggesting what people should do if they were caught in the crossfire. 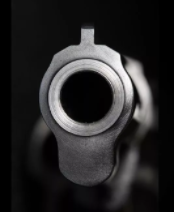 This was the photo that the Des Moines Register ran with the online version of this piece. No, no scaremongering here.

One of the tips was duck and find cover.

This list generated a lot of laughter, both in and out of the newsroom, because the advice was seemingly so obvious that it engendered a, “No, duh” response.

But for those who remember Nick Coleman as a columnist, that’s not quite a low enough standard.

These days, though, “duck and cover” is out of fashion.

That part is true.

I point it out because it’s just about the last part of this column rooted in objective fact.

Out Standing In The Field::  Finney isn’t the only one on the Register’s staff that doesn’t really get the law:

As standout Register Statehouse reporter Brianne Pfannenstiel writes, the new law says you don’t have to duck and cover or run away.

Instead, if a person is “any place where the person is lawfully present,” they may defend themselves with deadly force.

Further, the law says “a person may be wrong in their estimation of danger or about how much force is necessary ‘as long as there is a reasonable basis for the belief … and the person acts reasonably in response to that belief,'” Pfannenstiel reported.

A real “standout” reporter would have asked a few more questions, and found out that that’s pretty much how the “Reasonable Person” standard works.    If a complete stranger revs up a chainsaw and charges toward you yelling “I’m going to kill you, you sonafabitch”, and you shoot her, and deep in her heart she actually intended to stop at the last second and tell you it’s an elaborate practical joke?   The law doesn’t expect you to be a mind-reader – and no reasonable person would ever convict you for it.   –

At any rate, when Mr. Finney says…:

I wish Polk County Attorney John Sarcone and his colleagues the best of luck figuring out how to interpret what a “reasonable basis for belief” of someone feeling they’re in danger.

…you can tell he needs to talk with an even stand-outier capitol reporter, because they have to do it with every single self-defense case today.

Let’s Take A Break From The Column For Some Actual Facts:  Mr. Finney:   there are some subjective but firm factors that everyone has to meet to claim self-defense; I wind up citing them on this blog so often, I made a separate page for them.

Situational Awareness:  Back to Mr. Finney:

I’ll use an example from my own life. I used to walk a 3-mile loop in my parents’ east Des Moines neighborhood. Periodically, I crossed paths with a woman who was also out walking.

Every time the woman saw me, she crossed to the other side of the street. I understand that. She didn’t know me.

While most violence, including rape and homicide, is committed between people who already know each other, the woman was being cautious. I was a large man she didn’t know at twilight.

I tried to keep an eye out for people around me, but I was also listening to my workout mix cassette tapes (yeah, I’m that old). On hills, sometimes I put my head down and gritted through the climb.

What if I was walking at a fast clip and happened to come up behind this woman or bump into her?

It seems to me the way that law is written, she could shoot me dead, and the law, as written, would say she was free to go.

This is far-fetched, of course.

No, it’s not far-fetched.

Mr. Finney:  If she shot you, would a jury believe you posed a threat of death, mutilation or rape?  A real jury, not a fantasy nightmare jury?

Not sure how you behave around strange women in the dark, Mr. Finney, but as a 6’5 guy with an air of calculated menace living in a neighborhood full of college-age women, I go out of my way to appear innocuous and unthreatening when out and about after dark.

Of course, Finney is not merely ignorant about Iowa self-defense law; knowingly or not (I tend to think most reporters don’t know better and never get around to asking, because their editors never make them); he’s trafficking a lie about “Stand Your Ground”, one that I see, almost unaltered, from uninformed columnists all over the place; “Stand your Ground means you can shoot people who make you nervous”.

As we’ve pointed out in this space countless times in the past, it’s an ignorant myth.

I’m going to ignore the rest of the article; it’s no better-informed, but it’s off topic.

But Mitch – Why?:  You might be thinking to yourself “Mitch – you’re fisking yet another reporters’s badly-informed column about a law he or she clearly doesn’t understand.   For like the 1,000th time in the past 15 years.  Why?”

Because Don Quixote is my role model?

Well, maybe a little.  But there’s a more important reason.

I sent Mr. Finney an email, gently setting him straight on his many factual errors.

But if you know some 2nd Amendment activists in Des Moines, feel free to have them send Mr. Finney the link to this piece (his email address is at the bottom of the article).     Because newspaper columnists, for all their vaunted contact in the community, tend to live in echo chambers – especially columnists in “blue” cities like Des Moines (to say nothing of Minneapolis and Saiint Paul).

And sometimes, a little dissonance makes the chamber a little less echo-y.

7 thoughts on “No Facts Were Used In Writing This Column: Des Moines Register Edition”