During the heyday of dictators, the entire media was turned into a public relations apparatus for the government.

It was all-pervasive; there was really no legally escaping it.  All the means of communication – visual, written, even musical – were turned to the service of the dictator.

Remember all that jabbering about artists being bringers of peace, a group of walking safe spaces, from the piece about the de-facto arts colony in Northeast Minneapolis, earlier this week?  Sorry, folks; artists are no less likely to trade their freedoms for thirteen pieces of silver than anyone else would be under the circumstances. Hell – one of the greatest murderers of artists of all time was, himself, an artist.  He was obscure – some might even describe him as a “failure” as an artist, the kind of person who’d have an artists garret in a converted seed warehouse in, I dunno, Northeast Munich.    Art is no protection against dictators, thugs, tyrants, and the whole idea of your nation sliding down the primrose path to dictatorship.

For all the best of reasons, naturally.  For the children.  For affordable tuition and healthcare.  For punctual trains.

The film industry was co-opted, to serve the master, too. Feminists should take note:  Leni Reifenstahl, the single greatest female filmmaker in cinematic history, did her most notable work for the Nazis (to be fair, she may have spent the rest of her very long life trying to redeem herself for it).   Watch her most famous piece, Triumph Des Willens (Triumph of the Will); in between the icy realization that you’re watching World War 2, the Holocaust and the near destruction of Western civilization getting underway, it’s a pretty amazing movie.  Watch the first four minutes of the video; one of the most amazing bits of exposition in the history of documentary film.  We take for granted many of the cinematographic, structural and compositional aspects that were first introduced in this deeply creepy and – admit it – utterly stirring (if you ignore the people who are its subjects) documentary.

OK, how about the news media?   Isn’t their job to afflict the comfortable, and comfort the afflicted? Turn off that Betamax with All the Presidents Men on it.  Around the world, throughout history, the mainstream news media is among the first to be either silenced (they’re easy enough to find!) or co-opted (they’re people, more or less, and they act in their own self-interest, which is by no means always noble).  The mainstream news media is no more protection from authoritarianism, dictatorship and tyranny than a Lakota rain dance is.

“It could never happen here.  Could it?”

I love the sound of pollyannaish preconceptions dying horrible deaths.

Democrat Realism:   Yeah, you could say the media sucks up to Hillary Clinton. 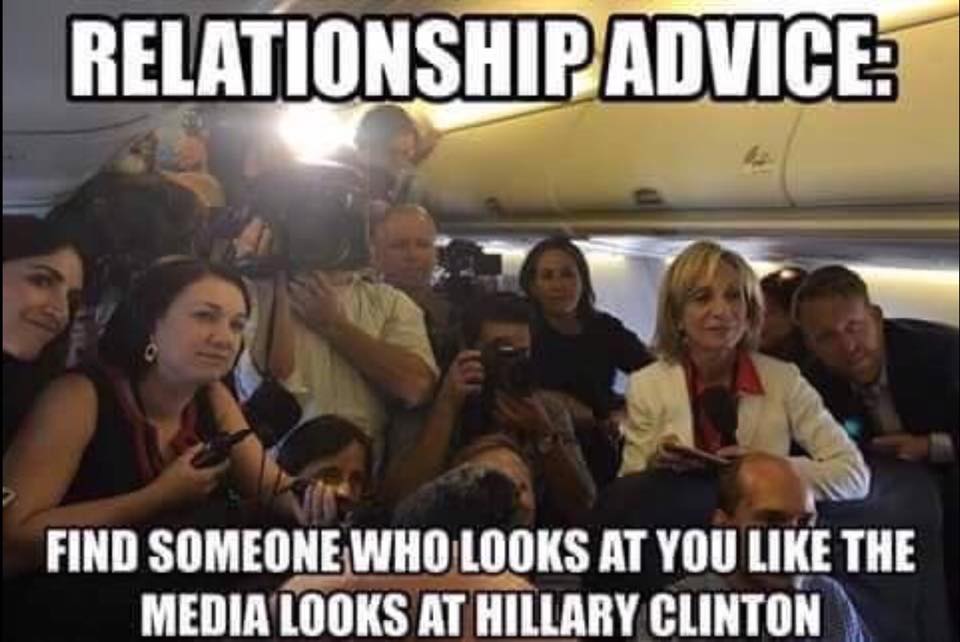 Not content to merely mythologize the present like Riefenstahl, Hollywood seeks to rewrite the past – airbrushing Hillary Clinton’s origin story (even for little kids), turning Barack and Michelle Obama’s first date into a personality-cult artifact, and among many other examples, completely shredded the facts and the subtest of Dan Rather’s fall from Olympus.  In a gloriously brutal review of Truth, by Christopher Orr in that noted conservative tool, The Atlantic, we see this pullquote…:

The movie loudly, hectoringly stresses the importance of always “asking questions”—my notes include, among others, the lines “Questions help us get to the truth,” “You stop asking questions, that’s when the American people lose,” and “You’re supposed to question everything, that’s your job”—and yet the very quality it celebrates in its protagonist is that she never questions whether or not her reporting might have been wrong.

…which wonderfully sets off this entire subject.

In an election season where the “newspaper of record” committed what was once an unpardonable journalistic sin by letting their subject control their coverage of…her, and where a major cable network gave the Clinton campaign a leg up in the debate (talk about overkill), where leaks old and new vividly show our worthless “elite” media colluding to shape coverage for Democrats, trying to subvert institutions that weren’t enthusiastically compliant enough…

I’m not saying that the American media is the same as the Soviet or Nazi-era German media.

I’m saying that they’re voluntarily exhibiting a level of obeisance that other nations’ media throughout history had to be strongarmed, browbeaten and threatened into providing.

9 thoughts on “Welcome To The New Samizdat”