Guns are a public health crisis.

Not the way anti-gun advocates claim they are, of course; gun deaths are down 50% in twenty years, and further still in places with more guns (not so much in Democrat-addled urban cesspools).  If cancer or heart disease deaths had dropped 50% in twenty years, “public health” advocates would declare a miracle.

But there is a public health problem related to guns.

It’s the mental health of uninformed, emotionally-supercharged gun haters that would seem to be the crisis.

The Bryght:  Bryan Strawser runs Bryghtpath, LLC – a business consulting firm that works with corporations on disaster preparedness, recovery, communications and security.   Strawser is also a leader of the MInnesota Gun Owners Political Action Committee – which gets involved in political campaigns – and the Minnesota Gun Owners’ Caucus, which lobbies the legislature (along with the Gun Owners Civil Rights Alliance).  It’s a good business.

His company has an office in the Northrup King Building (NKB) complex – a 100-year-old group of warehouse and light-manufacturing buildings that were turned into offices a while back, when Northeast became hip again.  The complex rents to a number of businesses – and a warren of artists, who keep their studios in the shabby-chic-yet-affordable space the NKB offers.  The complex is not an arts collective – it’s a bit of commercial real estate – but with nearly 200 artists, studios, and small galleries, the NKB is one of the lynchpins of Northeast’s art scene.

Strawser briefly listed the Coalition and the PAC alongside Bryghtpath on his office mailbox.  He also allowed a friend (a mutual friend, as it happens) to use the space to conduct a few carry permit classes (which, for those who haven’t been, consist of lectures and Powerpoints; the actual guns used for qualification are used at the firing range).

Anyway – Strawser has run his business out of that space for a little over a year now.

Along the way, a few of the artists who rent space took notice of Strawser’s affiliations, and took umbrage.  Strawser, being a communications guy, dealt with the issue the way he usually does; inviting people down to his office to talk.  Many of them did.  Conversations were had, agreements to disagree were reached, nerves were salved to the point where Strawser and a few of his artist neighbors threw an open house to discuss the issue with the rest of the building.

And that shoulda been it.  Right?

Not Bryght:   Please.  This is Minneapolis.  A city that elects Alondra Cano to office.

Howard Christopherson is an artist in the NKB; in addition to building picture frames, he runs one of the many small studio/gallery spaces that the NKB hosts.

And last summer, he started casting aspersions about Strawser on the building’s tenant page, as well as his own Facebook account.

And he was displeased:

For 13+ years I have proudly described this building as a great place. A giant Art Building, filled with artists, creators, furniture makers and sellers along with jewelers, painters and photographers etc. I guess we now add Pro Gun People who will for some money, teach you how to conceal and carry and they will lobby the St. Paul Capital to keep the gun pipeline flowing and easy to obtain.
I am disappointed, confused and dismayed that a Gun Proponant has a studio in the same building.

And, social media being what it is, a few of the building’s other artists started kibitzing amongst themselves.

Around this time, the building’s management pointed out the obvious; Strawser was a law-abiding person, running a perfectly legal business, doing something he had every legal right and qualification to do.  Not only that, but he’d agreed to keep all carry permit training out of the building.

Not good enough for Christopherson who, to protest against the indignity of sharing a building with people who saw the world differently than he, decided to fight back with the only weapon he had; to deprive the world of his deathless and eternal art.  He sent out a mass email to his list promising to refrain from displaying during any of the building’s constant stream of arts events.  One other building tenant, Sharra Frank, has apparently opted to break her lease because of Strawser – after spurning with Victorian theatricality Strawser’s offer to sit down and discuss.

And that’s where things sat for a while.

Layers and Layers of Gatekeepers:  Enter Sheila Regan, the “arts” “reporter” for the City Pages and fairly well-known left-wing activist in the Twin Cities (including, according to some reports, a member of an anti-gun organization – something a real journalist might have felt the need to disclose in reporting this sort of story).

She  took a statement from Strawser.  (I can’t speak for Bryan, but I know that when dealing with today’s City Pages, I’d never consent to a verbal interview without recorders rolling.  I’d prefer to do it entirely in writing; that way there’s a paper trail to correct the inevitable inflammatory inaccuracies.  Of which there were plenty; the online story went through three rounds of corrections as Regan repeatedly referred to Strawser as a “lobbyist”.  He’s not).

She did, however, end the story with a charming little editorial coda; she posted this bit of “art” (I prefer the term “artiness”, but nobody asked me): 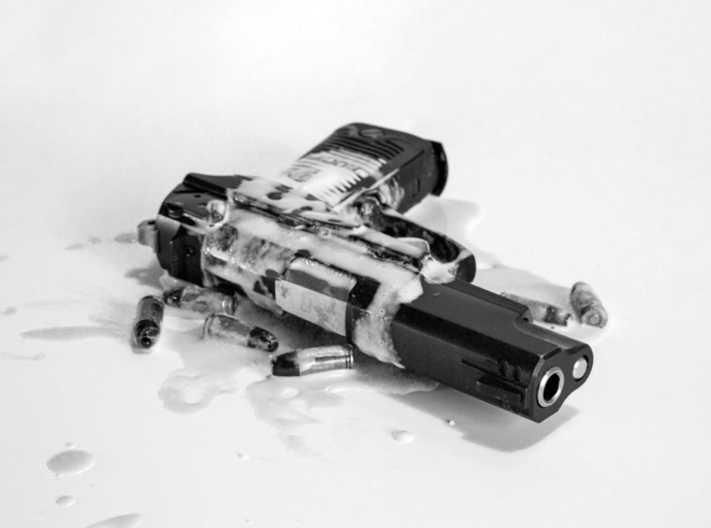 Speaking of public health crises – why is it that antis are so obsessed with shooters’ genitals, sexuality and bodily fluids?

Oh, yeah – it’s just another way that bullies try to shame dissidents; by sexualizing the non-sexual; a simultaneous deflection into meaninglessness and an attempt to humiliate.  It’s the visual version of what Donald Trump said, and Bill Clinton did.  It’s a stupid person’s substitute for knowing things.  It’s why anti-gunners love to fall back on tropes like “shooters are compensating for something”, and “gun fondler” – because it’s easier than knowing what you’re talking about.

And, given how prevalent the left uses it as a substitute for knowing anything about the subject, it may be another one of those public health crises we’re talking about.

Heroes Are Hard To Find: Anyway, Regan apparently interviewed Christopherson, and Christopherson gave his side of the story.  And in so doing, while wrapping himself in the “peace” label that artists supposedly spend their creative lives marinading in 1, let slip some interesting factoids (emphasis added):

Christopherson says his vocal opposition to Strawser being in the building was instinctual. Many of his heroes have been shot or killed by guns, including his father (in WWII), President Kennedy and Robert Kennedy, Martin Luther King Jr., John Lennon, Che Guevara, and Dian Fossey. He also lost his brother, Jimmy, and his good friend Eduardo Blidner recently to gun suicide.

Mr. Christopherson:  you can not simultaneously wrap yourself in “peace” and lionize Che Guevara, a racist, homophobic, totalitarian mass killer.   Sorry about your father and brother, but it wasn’t a “gun” that killed either of them; it was an enemy soldier and a mental illness.

Robert Kennedy and John Lennon were murdered in a place where civilian guns are illegal.  And not to nitpick – that’d be kinda ghoulish – but Dian Fossey was not shot; she was bludgeoned to death.

The other tenant, Sharra Frank, also had a complaint (again, I’ve added emphasis):

Around that time, Frank had been helping to arrange a field trip for her son’s school, where they would tour the Northrup King building. “When I discovered this tenant was there, I felt so conflicted,” she says. “I thought this was such a family-friendly safe space.”

When she brought her concerns to the manager regarding whether guns were allowed in the building, she learned that by state law, landlords can’t restrict their tenants from having guns or carrying guns in a space.

So Frank decided to leave. “I know I can’t invite people into a space where I’m hiding info that might make them uncomfortable,” she says. She adds that she doesn’t feel safe bringing in youth and people from marginalized communities into the building. “Also, I didn’t feel I could creatively make work because I would feel distracted.”

So many questions, Ms. Frank.

Since when are artists “family friendly?”   I love artists – I am an artist, for chrissake, and most of my family two generations before and after me are to one degree or another too – but I will scout out any gallery before I bring kids inside.  Some of those folks are seriously twisted.

“Youth”, who grow up playing “Red Dead Redemption” and “Grand Theft Auto”, will be distracted by a genial, law-abiding guy sitting in an office, believing different things than you do?  Do tell.

And “marginalized youth” are in plenty of danger from guns…

…owned and carried illegally by the people in their communities who are doing the marginalizing.

And if demonstrably law-abiding people doing legal things in a legal way that is a minimum of two orders of magnitude less likely to get you hurt than the general public makes you and your clients uncomfortable – well, I think I found our “public health crisis”.

So Where Are We Now?:  Mr. Christopherson is apparently still mortified that someone in his building is doing a legal thing he’s allowed to do, and, operating under the assumption that the Northrup King building is an arts collective (it’s not), mobilize a campaign of shaming and bullying against someone…doing perfectly legal stuff that makes him unconmfortable for utterly irrational reasons.

Ms. Frank has apparently broken her lease.  Since space in the NKB is both inexpensive and in immense demand, I’m sure that’ll work out well for her.

Both would seem to have turned Bryan Strawser’s presence in “their” building into a neurotic obsession, which they’re manfesting in bullying, shaming and gaslighting, apparently seeking the thing that all “artists” seek; absolute ideological and personal conformity. 2

So all you gun-grabbers who jabber on about guns being a “public health crisis”?  You’re right.

Oh, yeah – Bryan Strawser continues to be a law-abiding citizen doing things he’s legally entitled to do.  No trail of bodies seems to have ensued from this.

UPDATE:  Join the backlash!  If you’re an artist – or just value freedom – “like” “Artists for the Second Amendment” on Facebook.

[1]  Throughout the various social media exchanges, various “artists” expound on how art is about “peace”.  It’s a pollyannaish view at the very least; Johnathan Borowski, to pick a random example, is not about ‘peace”.  Anyway – I’d like to ask them if they know that one of the greatest murderers of people, and artists, in human history was an “artist” from Austria who was just as talented-but-obscure as they are…

[2] For the impaired among my readership, that’s sarcasm.