Sunday morning services had already concluded by the time the small British torpedo boats the HMS Mimi and HMS Toutou had left their port on the massive freshwater Lake Tanganyika in the Belgian Congo.  Having changed out of his Naval dress uniform and back into his usual garb of short-sleeves and a skirt (which he wrongly thought was a kilt), British Captain Geoffrey Spicer-Simson began hunting his intended prey – the German gunboat Kigani.

But the Kigani had been on its way to intercept them, and was surprised to see the small British “fleet” racing out to meet them.  In 11 quick minutes, the Kigani had been critically damaged; a shell having ripped through her deck, killing the gunboat’s captain and petty officers.  The Kigani withdrew her colors – a sign she intended to surrender.  Not content with his prey’s brief battle, Simson ordered the small wooden Mimi to ram the metal gunboat.  The Mimi‘s bow was significantly dented; Simson’s ego definitely was not.

Returning to shore, Simson, wearing a German officer’s ring he stole from one of the dead, proclaimed himself the “Horatio Nelson of Africa.”  The day after Christmas in 1915, the battle for Lake Tanganyika – the second largest freshwater lake in the world by volume – was almost over.  The battle for historic acclaim from one of the most eccentric (and incompetent) British officers in the Great War had begun.

Graf von Gotzen’s crew loads her 4-inch deck gun.  The weapon dwarfed anything the British or Belgians could wield in East Africa

Despite some of the first shots in the Great War being fired in Africa, the Entente had made little progress in removing the German threat to their colonial possessions.  In German East Africa, Lt. Paul Emil von Lettow-Vorbeck, who would soon become famous for his prolonged defense, had gone on the offensive, attacking and defeating the Indian Expeditionary Force sent to subdue him with an army eight times Lettow-Vorbeck’s size.

German dominance in the region extended to the water – both on the ocean and on the interior.  The German cruiser Königsberg had managed to sneak into the Zanzibar harbor and sink a British cruiser at anchor before retreating.  And on Lake Tanganyika, the Germans were looking at total naval control with the gunboats Kigani, Hedwig von Wissman and a massive re-fitted steamer called the Graft von Götzen – armed with one of the 4-inch gun batteries from the Königsberg.  With that kind of fire power, the British and Belgians feared, Germany could swing the war in East Africa in her favor.

If Germany’s actions were causing alarm in London, the Admiralty’s response didn’t exactly suggest the British were taking the threat all that seriously.

In fairness, the dispatching of two 40-foot torpedo boats to Lake Tanganyika was probably as much as the British Navy could do, being stretched nearly impossibly thin by the blockade of Germany as it was.  But the Admiralty’s choice of commanding officer gave truth to the lie that East Africa really mattered to the War Office.

Captain Geoffrey Spicer-Simson had in a short 10 years managed to nearly sink a British submarine, run aground at Portsmouth Harbor, ram a British destroyer with a cargo ship, sink a small training vessel (killing a man), and watch the HMS Niger, a large gunboat under his command, be sunk by the Germans while at a party ashore.  And what Simson lacked in naval talents, he made up for in being an egoistical braggart.  He falsely claimed to have shot the largest rhino in the history of the Gold Coast (there are no rhinos in the Gold Coast).  He claimed he spoke various African dialects, when he spoke none.  And he was nearly court-martialled twice: once for one of his many ship sinkings, and another for attempting to take command of a ship by force.  His reason?  The ship’s commanding officer had insulted him when he barked to stop smoking…next to the gasoline tanks.

The other British “warship” – the HMS Toutou

Still, Simson did speak French and German and had spent a few years of his youth in Africa.  That was all that was necessary to convince the Admiralty to ship him out of England.  Simson had been a sideshow performer of an officer and was now being sent to a sideshow theatre of a sideshow theatre of the war.  Whether Simson won, lost, lived or died didn’t seem to faze his superiors.

The first challenge to the British expedition wasn’t Simson’s idiocy, but the elements.

From London to Lake Tanganyika was a 10,000 mile journey; a combination of ocean-voyage and hiking through the African jungle.  The two torpedo boats, which Simson wanted to call “Cat” and “Dog”, had to literally be dragged over the ground and shallow river banks by hundreds of African porters.  Simson, wearing his distinctive skirt and short-sleeves that showed off his tattoos, was more concerned about self-promotion than the self-preservation of his vessels.  Flying a Vice-Admiral’s flag outside his tent, Simson entertained the locals who soon began calling him “Bwana Chifunga-tumbo,” or Lord Belly Cloth.  Simson’s Belgian allies in turn started calling Simson “commandant de la jupe” – the skirted major; a promotion of sorts for the Captain.  Simson was appalled and demanded they address him as “mon colonel.”  For both the British and the Belgians, the expedition was quickly devolving into “Simson’s Circus.” 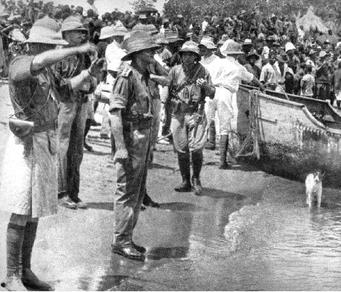 Geoffrey Spicer-Simson (far-left).  His own biographer described him as: “a man court-martialled for wrecking his own ships, an inveterate liar and a wearer of skirts”

Simson’s shamelessness did have one positive effect.  The natives of the region, the Baholoholo, were nominally Germany’s allies.  But Simson’s bizarre appearance – he wore a gigantic woolly beard for parts of the campaign – and colorful tattoos all impressed the Baholoholo as signs of virility.  If Simson represented the average Briton, then perhaps the Baholoholo had erred in their choice of allies.  Valuable ground intelligence soon began arriving at the British/Belgian camp.

Of course, whether Simson would listen to the intelligence or not was another matter.  If anyone appeared to be a threat to Simson’s prestige, he was immediately relieved.  John R. Lee, the expedition’s second in command, had been the one to discover the German gunboats in East Africa.  A big game hunter and Boer War veteran, Lee’s advice on how to respond to the threat had become the exact plan being executed.  If it wasn’t for the fact that Lee was no longer in the service, the operation might have been his to command.  Lee’s leadership was critical in negotiating with tribes to get assistance through the various rivers and passages.  But there was to be only one ringmaster in “Simson’s Circus.”  Simson rewarded Lee by falsely claiming dereliction and drunkenness.  Lee was sent home in disgrace. Simson aboard the Mimi

With the Kigani captured, and still usable for service, the numerical advantage on Lake Tanganyika had swung to the Entente.  But the Hedwig and the large gunboat the Götzen remained.  The Hedwig, unwisely separated from the Götzen, would be quickly dispatched as well.  With her main deck gun jammed, the Hedwig was hounded by the Entente armada until the ship was set ablaze.  Sinking into the lake, only the Götzen remained as a naval threat.

With two victories under his belt, Simson telegraphed London that Lake Tanganyika had been claimed for the Crown.  Simson basked in his smoking jacket with a glass of vermouth while standing on the shore.  The locals made clay effigies of their new war lord.  Yet when the Götzen arrived to duel with this “African Admiral Nelson”, Simson’s ships were nowhere to be found.  Comically, Simson and the German commander merely traded menacing glaces from ship to shore, with the Götzen eventually withdrawing once they realized the British weren’t going to come out and fight.

The Götzen would fall victim to events on the ground, not the water.  The advance of Entente troops in East Africa forced Lettow-Vorbeck to cannibalize the ship’s crew and armaments for his guerrilla campaign.  Simson had been pressed by his Belgian allies to attack Lettow-Vorbeck’s fortresses that lined the lake to help limit their ability to escape.  Unwilling to dent his newfound reputation with a potential loss, Simson declined.  Thousands of German Askari (native troops) escaped to fight on.  When the Belgians finally managed to overtake the abandoned forts Simson had refused to engage, they found nothing but cardboard guns pointed at the Lake.

Simson waves from the deck of the Belgian torpedo boat Netta

Upon his return from Africa, Simson was awarded with the Distinguished Service Order.  His antagonized Belgian allies?  They gave him the Croix de guerre and appointed him a Commander of the Order of the Crown.  A war hero in a war with few heroes, Simson was a military celebrity, successfully quashing the stories of his horrid performance of the expedition, at least publicly.  Simson’s exploits were touted in a book and lecture tour he gave and became the inspiration for the novel and movie The African Queen.

Privately, once the Admiralty was informed of Simson’s actions he was quietly reprimanded.  The “circus” was definitely not going to come to London.  He was never given a command again.