The British flag hung over the customs building in Lomé, Togoland, hoisted after 14 English troops, and a few conscripted police officers, had occupied the location.  A telegraph operator was sent for via bicycle to try and repair the recently cut line.  The small contingent waited for a larger British force, marching overland 50 miles in grueling August heat, to arrive and relief them.

Only days into their war with the German Empire, the British had their first new colonial possession – a small town in Western Africa that had been defended by 460 German colonists and Schutztruppe (Black African “protection forces”) the day before.  The “Scramble for Africa” among the European powers was over.  The scramble to claim as much German colonial territory as possible was on. White Man’s Burden; Colonial Empire’s Opportunity – the patronizing view of Africa from the early 20th Century European perspective. The Allies claimed they were liberating Africans from brutal German rule (which was true, in some cases). But the war in Europe was nothing more than a causa belli to acquire more territory

The war didn’t have to come to Africa.  In fact, many in Africa had assumed it would bypass them completely.

As the 19th Century was coming to a close, and European powers raced to grab as many colonial territories as they could hold, the thought of what might become of these possessions in the event of a general war troubled plenty of European diplomats.  British and French politicians noted that the forces being used to keep the “Dark Continent” under white rule were a thin paste of tribal allegiances, bribes, and very modest military might – hardly a combination that would survive a conventional war between European armies.  The Europeans had a hard enough time dealing with rebellious locals, and debacles for the various powers in battles like Isandlwana (the Zulu War) or Amba Alagi (the first Italo-Ethiopian War) had shown the limitations of European strength so far from home.

The German African Empire – it comprised of Kamerun, Togoland, German South-West Africa and German East Africa. Most of the colonies were severely under-developed.

At the Berlin Conference of 1884, the European powers agreed that in the event of a European war, Africa colonies would remain neutral parties to the conflict.  It was an unrealistic expectation.

Although the various African colonies hardly represented either a strategic threat or prize (short of perhaps South Africa or the Suez Canal), they were nevertheless part of the larger strategic consideration for the war.  German raiders could attack British shipping from African ports.  German agents could try and destabilize tense situations among the Boers in South Africa or the Zaian Confederation in Morocco (both saw rebellion during the war).  The African colonies had been largely free to run themselves, and local leaders were terrified to hear about the declarations of war, unlike their European counterparts.  Yet all sides now knew Africa would eventually be pulled into the conflict.

The King’s African Rifles – a British holdover from the days of the “Scramble for Africa,” where the greatest threats were boredom and disease before concerns about naive resistance

But with what forces?  The Germans lacked offensive capabilities.  The French homeland was being invaded, and 80,000 French troops were already tied down in Morocco fighting a bitter insurgency (600 French soldiers would be killed in one battle in November 1914).  The British Committee of Imperial Defence had decided in favor of offensive operations, but with only local forces as to not draw against troops being prepared for the Western Front.  In theory, it was a smart move.  In practicality, it presented a near impossibility for local commanders – attack with small forces, using mostly black African troops for the kinds of operations they had never been trained to conduct.

The first real “campaign” in Africa underscored the difficulties, and the incredibly modest stakes.  The Allied invasion of German Togoland involved roughly 2,000 combatants total, and few than 200 killed and wounded – all for a country of 1 million people.  Togoland (now Togo and parts of Ghana) held about 3 railways and a half-dozen roads, meaning materials were mostly moved by hand.  The British invasion force alone, with only 558 troops, brought over 2,000 carriers to help move supplies.

Just because the terrain was different from Europe didn’t mean the style of warfare changed in Africa.  Almost all of the Togoland casualties came from one battle – the Battle of Chra – as 500 German troops, in trenches, repulsed a combined Anglo-French assault.  In fact, the first British officer casualty was in Africa, not France, as Lieutenant George Masterman Thompson, along with 17% of his attacking force, were killed against the German line.  It was a preview of the horrors of trench warfare.

The speed of the occupation of Togoland proved to be the exception, not the rule, in the African campaigns.

An antiquated piece of British artillery – the original Allied objective had been to use only local troops and equipment for colonial operations, as to not distract from the Western Front. For most of those troops fighting in Africa, that meant using 19th Century weaponry

In Kamerun (modern Cameroon), it took two years to successfully force a German surrender.  At the Battle of Nsanakong, one wing of the British invasion force was essentially destroyed and at the town of Mora, the Germans managed to dig in for the remainder of the campaign – only surrendering after other German forces had escaped or disbanded.

The fight in German East-Africa deserves an article all of its own – and we may revisit it later in the war.

German General Paul Emil von Lettow-Vorbeck led his small army (18,000 at its peak, but more like 5,000 for the entire conflict) until the 3rd of August in 1914 until November 23rd, 1918.  That’s right – past the end of the war in Europe.  Lettow-Vorbeck had one objective with his strategy – prolong the war and make it as costly as possible.  With the British in constant pursuit, Lettow-Vorbeck tied up 250,000 Allied troops and cost the British 10,000 dead over the course of four years.  It was estimated the Allies used 1 million people (troops and carriers) to try and end what some historians call “the greatest single guerrilla operation in history.” 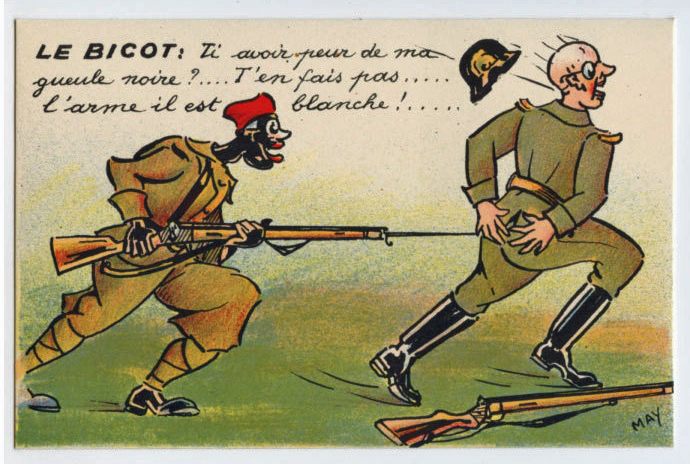 A French recruitment postcard for African troops – most black African troops fought in Africa, as there was massive cultural and political resistance to bringing them to Europe

The campaign in South-West Africa (modern Namibia) wasn’t quite the largest, but it was the most politically risky.  Coming only 12 years after the last Boer War (the rebellion of Dutch Afrikaans), South Africa was political unstable and ripe for exploitation.  Germany had provided support to the Boers in the Second Boer War, and for rebels like Lieutenant-Colonel Manie Maritz, the war in Africa provided one last chance to throw off the shackles of British rule.

Maritz led an insurrection of 12,000 rebels in October of 1914, which while being relatively easy to put down (as opposed to the near 60,000 who died in the Second Boer War), forced South Africa to realize that the German South-West territories had to be occupied when Maritz escape under German protection.  Some 67,000 local South African troops marched into German South-West Africa, squaring off against a motley crew of 10,000 Schutztruppe and settlers, plus 500 surviving Boer troops led by Maritz.

Paul Emil von Lettow-Vorbeck and his men – the East African German General had just over 5,000 German & African troops at his disposal, but managed to carry on an effective counter-campaign against the Allies from August 1914 until the end of the war

Oddly enough, the men in charge of the British invasion had been at arms against Britain just years before.  South African Prime Minister Louis Botha had been a prominent Boer political leader, yet pushed hard to occupy South-West Africa without the support of British regulars.  General Jan Smuts had been a Boer commando, but went on to become a British Field Marshal and even serve in Winston Churchill’s cabinet a world war later.  Why the change of heart in the matter of a dozen years?  Because the war offered an opportunity for South Africa to expand its territory and political/military muscle within the Empire.  A strong South Africa could become an independent South Africa.

Men like Smuts and Bortha were only ahead of the curve in understanding the implications – and opportunities – the war in Europe presented.  The “Scramble for Africa” had been restarted by the conflict.  The colonial possessions of the Central Powers were now up for grabs across the globe.  From Africa to Asia, German (and soon, Ottoman) territories were minor prizes to be seized.  The value of these lands hardly factored into the equation – no one wanted a competitor, even a militarily-allied country, to increase their theoretical power or reach.

In the end, the grasp for colonial expansion only served to highlight the needlessness of the war.  A dead son, brother or father in Flanders for the ability to occupy the Togolands of the world hardly seemed logical.  But in August of 1914, with the citizens of the warring powers eager to fight, and die, for such goals, the logic of Europe’s self-destruction had yet to be questioned.

That would soon change.