SCENE:  Mitch BERG is sitting on his porch, working on his next book project.

Avery LIBRELLE walks through the gate from his back yard and toward the sidewalk.

LIBRELLE:  Oh, I was sorting your trash.

LIBRELLE:  No.  Evidence of thoughtcrime.

LIBRELLE:  Hey – speaking of thoughtcrime – Ben Carson is a hypocrite.  He speaks out against welfare – but he and his mother used it!

BERG:  Yeah, I just saw the photomeme your side has been passing around: 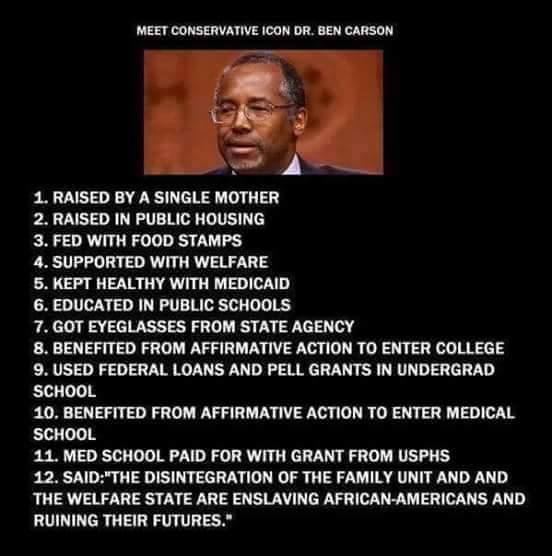 LIBRELLE:  Yeah!  Hypocrite!  His entire success was rooted in the welfare system!  Hypocrite!

BERG:  Well, if his entire success was rooted in the system, then every child growing up on welfare would be a doctor or a lawyer, wouldn’t they?

BERG:  OK, let’s just for get for a moment that the whole “argument” is a logical fallacy…

LIBRELLE:  But he’s not a former Klan member!  His mom was on welfare!  He grew up in the system!  It made him what he is today!

BERG:  So you’re claiming credit for Ben Carson’s success on behalf of the welfare system?  Fair enough.  Will you claim “credit” for all the people of all races who’ve become multi-generational dependents of the system?

LIBRELLE:  There is no such thing!  The science is settled!

BERG:  Of course it is.  Look – what you are saying is this; if someone’s ancestors went on welfare, to which they are entitled – because welfare is, for better or worse, an entitlement in this country – and that person not only uses the system exactly the way it was intended to be used, but goes on to succeed far above and beyond any rational expectations, that person isn’t allowed to point out what an exception to the rule he is, and how the welfare system as it is today *harms* the upward mobility that he experienced?

In other words, if you’re born into the system, don’t care speak out against the system, because the system owns you and everything you are, think and believe, forever?

Doesn’t that pretty much prove Carson correct?  That you, the system’s supporter, are using it as a form of intellectual indentured servitude?