It was barely 14 minutes past midnight when the twin explosions, coming almost one on top of the other, rocked the U.S.S. Indianapolis on July 30th, 1945.

Coming from Guam by way of Tinian, few of the crew of the Indianapolis – and none of the crew of the Japanese submarine that had just given her a mortal wound – knew of the cargo she had just recently delivered.  The first atomic bomb had laid in her depths just days earlier.  The ship, having seen near constant action since 1942, was en route to Leyete to join Task Force 95 in sweeping the South China Sea of Japanese shipping.  She would never see her destination, sinking within 12 minutes of being hit.

Of the Indianapolis‘ 1,200 man crew, only 300 had perished when the ship went down, despite the speed of her sinking.  Nearly 900 men had thrown themselves into the vast expanse of the Pacific to avoid becoming trapped in the vessel as she listed and then rolled.  They leaped in with few rafts or lifejackets.  There had been no distress call.  The speed of the sinking meant the U.S. Navy had no idea so many of their sailors were in the water.

But the sharks knew.  And for the next nearly four days, almost another 600 men would be lost.

The U.S.S. Indianapolis – with a long Naval career and good speed, the Indianapolis was a logical choice to escort the first atomic bomb in 1945

There’s a temptation to believe that had the Indianapolis not been linked with the atomic bomb – and the tragedy of her sinking – the ship might never have been notable at all.  Rather, the Indianapolis had 13 years of distinguished, and interesting, service before meeting her untimely end.

Built in 1932, the Indianapolis had escorted Pres. Franklin Roosevelt for his South American goodwill tour in 1936.  The flagship of Scouting Force 1, the Indianapolis made a port stop in nearly every city south of the Panama Canal.  And with the attack on Pearl Harbor, which the Indianapolis managed to avoid by participating in mock bombardment drills on Dec 7th, 1941, the Indianapolis was among the first American ships to see combat alongside the aircraft carriers Lexington and Yorktown in New Guinea.

In almost every major naval campaign of the Pacific War, the Indianapolis saw action.  Attu, Tarawa, Palau, the Battle of the Philippine Sea, Okinawa – the Indianapolis even participated in the late February raid on the main Japanese naval base at Kure.  Despite five different commanders taking her helm during the war, the crew of the Indianapolis had a reputation for tremendous service.  As such, she was chosen to deliver the atomic bomb to Tinian Island in July of 1945. “Little Boy” – the Indianapolis’ cargo.  Almost no one onboard knew what the ship contained, although probably more than a few thought it was strange that the ship was sailing alone and quickly

Commander Charles B. McVay III performed his orders to rush the bomb to Tinian with skill.  Sailing alone, and under radio silence, the Indianapolis cruised at nearly 33 knots, avoiding detection and delivering the bomb components on July 26th, 1945 after a quick 10-day voyage.  Relying on the Indianapolis‘ speed, McVay had been ordered to forgo the standard zig-zag sailing formation.  That maneuver, and McVay’s orders, would haunt the Indianapolis for decades to come.

Japan’s submarine fleet hadn’t fared any better than their surface fleet by the summer of 1945.  81 of the 201 submarines Japan lost in the Second World War occurred from 1944 to July of 1945.

But the Japanese were extremely active in the sailing lanes between the Mariana Islands and the Philippines, having just sunk an American destroyer escort days earlier.  McVay had been warned about submarine activity, but had not been given any specifics.  He would only find out after the war that the USS Underhill had been sunk along the same route and that the ULTRA code-breaking program had discovered the presence of submarine I-58 on the Indianapolis‘ path.  McVay had requested a destroyer escort for his cruiser, as no ship had made the journey without some form of protection, but had been denied. 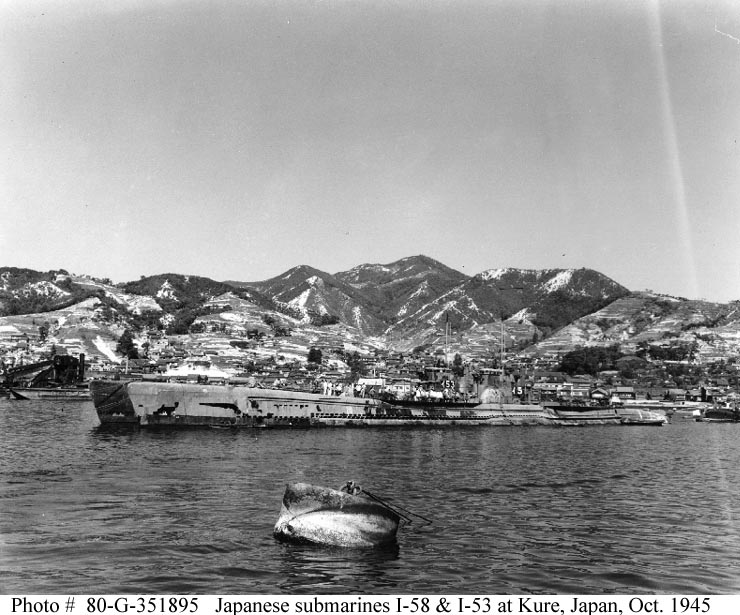 With his nuclear cargo no longer aboard, McVay had been ordered to zig-zag at his discretion.  The tactic was often employed by vessels once a submarine had been spotted in order to make torpedo targeting more difficult.  McVay gave the order to zig-zag until night-fall, when heavy cloud cover seemingly made detection more difficult.  The order to move evasively was lifted and McVay went to bed.

Directly on the Indianapolis‘ path sat the Japanese submarine I-58.  Commander Mochitsura Hashimoto could hardly believe his luck – the ship was headed straight for him and obviously hadn’t discovered his sub’s position.  The I-58 quickly fired off two torpedoes, confirmed the hits, and made their escape.

The Japanese had scored their last significant naval victory.  The United States was about to suffer one of it’s largest naval losses of life. 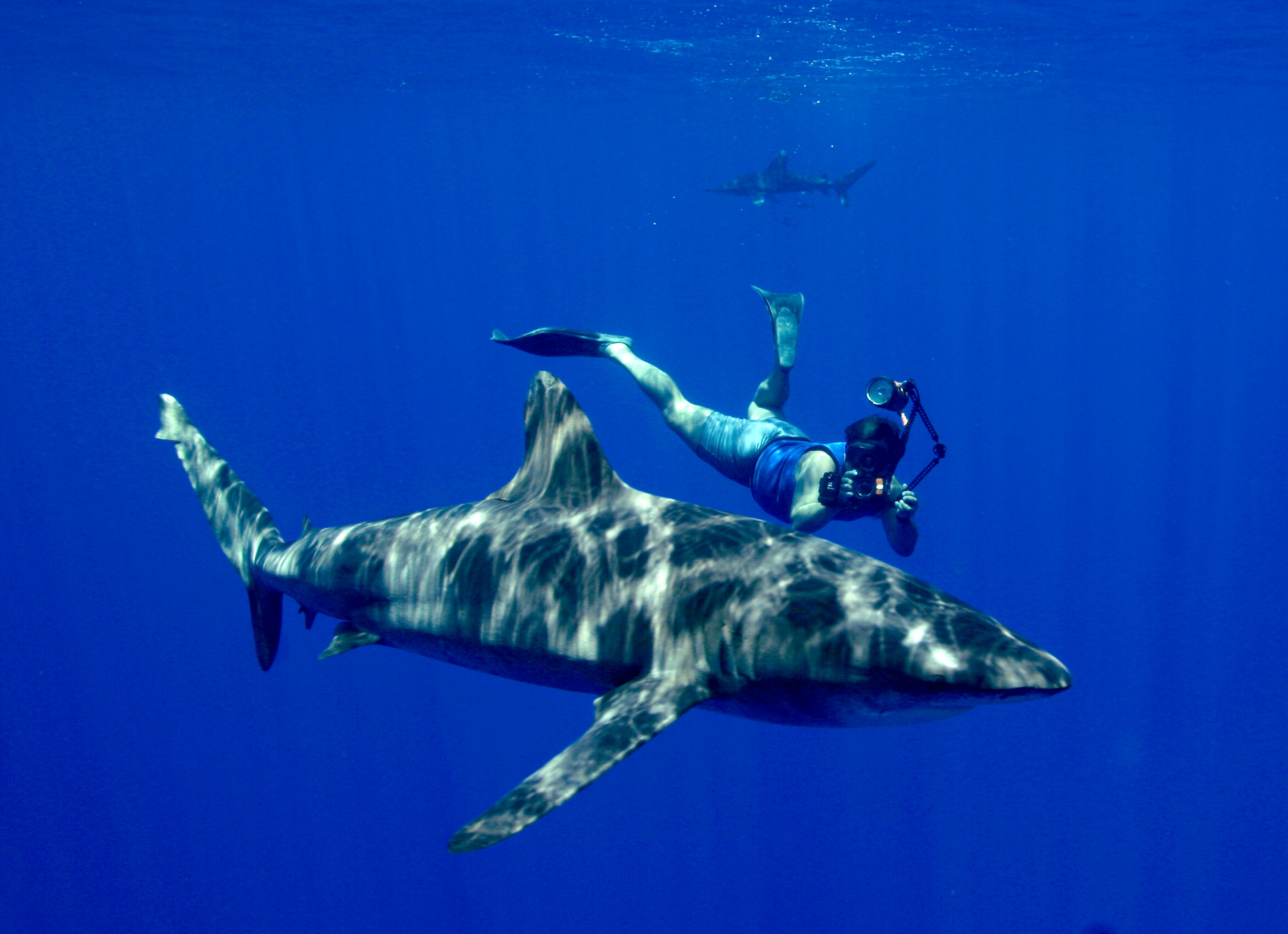 The Oceanic White Tip – other sharks have worse notoriety, but the White Tip is likely responsible for most of the Indianapolis’ shark-related deaths. The diver in the background gives a bit of a sense of scale of the fish – the White Tips grow as large as 13ft

For the next three-and-a-half days, the estimated 880 men who survived the initial sinking fought to survive the elements.

Staying afloat was the first challenge.  Few lifeboats or lifejackets had managed to be brought into the water.  Combined with the limited debris from the wreckage, men desperately clung to what they could in small, huddled groups.  Many, too weak to hold onto anything or continue paddling, drowned.  Food and water were almost nonexistent.  A few tins of SPAM and salt-water logged crackers floated up from the Indianapolis, but most went days without eating.  All went days without water; many losing their minds from dehydration, attacking their fellow survivors, drinking seawater, or believing they had spotted land and swimming away from the small groups of sailors.

The only thing in abundance were sharks.  Attracted by the commotion and blood from the survivors, the sharks repeatedly attacked.  Sent into feeding frenzies by the corpses of those who couldn’t endure the brutality of the elements, the sharks equally attacked the living and the dead.  Without medical supplies, even those men suffering from a “testing-bite” by a shark would quickly bleed to death and need to be cut away from the group lest they attract even more sharks. 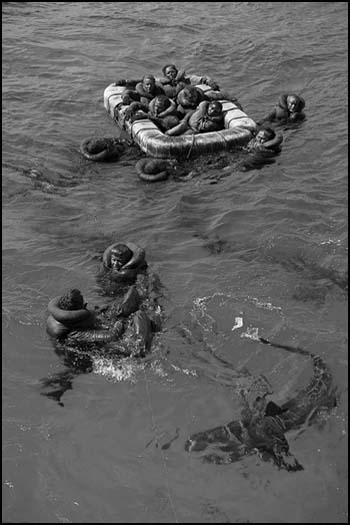 It’s a still from a movie, but it captures the horror of those men who went into the water.  Despite the ship’s pop culture reference as a magnet for shark attacks, most of those who died probably did so from exposure

More men might have died if not for the luck of a PV-1 Ventura airplane and the disobedience of Lieutenant R. Adrian Marks.

On the morning of August 2nd, a PV-1 Ventura airplane on a routine patrol (no one still knew the Indianapolis had sunk) spotted some survivors.  While the plane dropped a lifeboat and a radio transmitter, the plane wasn’t capable of doing anything more beyond radioing for help.  Lt. R. Adrian Marks’ PBY Catalina, a seaplane, could do more – but was ordered to simply observe until rescuers arrived.  After witnessing several men attacked by sharks, Marks’ decided to disobey his orders, landing his Catalina and picking up as many men as he could.  Marks even tied men to the wings to get them out of the water, wrecking the aircraft but saving additional lives.  In total, Marks would save 56 of the eventual 317 survivors of the Indianapolis.

The crew had endured, but there would be one more casualty.

The survivors – 321 men were pulled from the water alive; 317 would survive to see the end of the war.  While the men who lived held no blame for Commander McVay, the victims’ families would torment the ship’s commander for decades

Charles McVay III would stand trial for a court-martial for his command of the Indianapolis.  He would not know the exact charges against him until he showed up for his trial on December 3rd, 1945 because the Navy hadn’t yet decided what to charge him with.  All they knew was that a sizable United States Cruiser was at the bottom of the Pacific, and almost a thousand men with her.  Someone had to be at fault.

The prosecution settled on McVay not following orders to zig-zag, despite the fact that the order was clearly under McVay’s discretion and the ship was only to stop zig-zagging if the weather became cloudy, which it did.  The prosecution even made the historic step of bringing the I-58’s commander, Mochitsura Hashimoto, to the stand to confirm that the Indianapolis was traveling on a straight line.  Hashimoto attempted in vain to defend McVay, stating that because of the ship’s direct approach, no amount zig-zagging would have avoided a torpedo.

Hashimoto’s testimony didn’t matter.  McVay was court-martialed; his conviction only overturned by the intervention of Admiral Chester Nimitz who thought McVay blameless.  McVay would be promoted to Rear Admiral by the time he left the service, but the public damage had been done.  As the only commander of an American naval vessel sunk during the war to be court-maritaled, McVay would be tormented publicly and privately for decades, as the media circled him relentlessly years after the incident would have otherwise passed from the spotlight.

The Last Casualty – Charles B. McVay III commanded the Indianapolis and was court-maritaled for its sinking

McVay’s crew forgave him – most believing he hadn’t done anything wrong for which he needed to be forgiven in the first place.  But many victim’s families did not.  Letters accusing him of murder would appear every few years on his doorstep, and vicious phone calls would come to his home.  The strain of dealing with such hatred, which often appeared frequently around the holidays, was made greater when McVay’s wife passed from cancer.

In November of 1968, McVay’s gardener discovered his body in his home’s backyard.  McVay had shot himself with his service pistol.  In his other hand, he clutched a toy sailor.

2 thoughts on “The Feeding Frenzy”