The shelters were scattered across the cool New Mexican desert, one in each direction, 5 miles away from the target – a simple wooden 100-foot tower, looking much like an oil derrick.  Yet for most of the observers, the VIP shelter 20 miles away seemed the safer bet.

The mood was tense.  The gathered collection of scientists and soldiers tried breaking the tension with betting pools on the power of the explosion they were about to witness.  J. Robert Oppenheimer, the director of the program, was on the low end of most of the predictions – only 30 tons of explosive power.  More confident scientists guessed the explosion would be 1,400 or 3,000 tons.  One pessimist wagered zero.

At 5:29am on the morning of July 16th, 1945, the “Gadget”, as it had come to be known, was triggered.  The surrounding mountains were said to have been lit up as though it was the middle of the day.  The shockwave could be felt 100 miles away.  A mushroom cloud 7.5 miles high was all that was left at the center of the detonation.  The explosion had the effect of 200 kilotons or 20,000 tons of TNT.

Operation Trinity – the testing of the first atomic bomb – had been a success. The Los Alamos headquarters for the Manhattan Project.  An inauspicious backdrop to the most destructive weapon in human history

The path to Trinity had been an arduous one.  Six years, 130,000 workers, $2 billion worth of expenses (the equivalent of over $25 billion today), espionage and dissent all hallmarked the journey to the design, development and eventual use of the atom bomb.  It was a journey started in August of 1939 with nothing more than a letter.

By the summer of 1939, a conscious had begun to develop among many of the foremost scientific minds of Europe and United States that the recent discovery of uranium fission meant that a neutron-driven fission of heavy atoms could produce enormous amounts of energy.  And that such energy could be weaponized.

Hungarian physicist Leó Szilárd, having left Europe early in Hitler’s rule to live in the United States, was among the first to conceptualize the destructive power of what would be known as an atomic bomb.  Many, certainly those outside of the scientific community, thought that Szilárd was engaging in science fiction.  The thought of a military capability to such energy didn’t even occur to many of his contemporaries.  Albert Einstein himself, when approached by Szilárd to help draft a letter to President Franklin Roosevelt to encourage America to develop it’s own nuclear program, remarked “I did not even think about that.”

The testing site for “the Gadget.”

The addition of Einstein’s name to Szilárd’s letter caught the White House’s eyes.  A follow-up meeting with Szilárd that autumn, with Germany’s invasion of Poland in the background, convinced the Administration to finance research into the atomic field…a measly $167,000 (about $2.8 million today).  By comparison, TNT factories at that same time were running in the $90-128 million range to construct and operate.  Despite Einstein’s backing, and Szilárd’s passionate pleas, the United States remained largely unconvinced.

It would take events outside of the U.S. for America to commit to developing an atomic bomb.

In Britain, scientists Otto Frisch and Rudolf Peierls of the University of Birmingham had proven that it was theoretically possible to achieve nuclear fission within a bomb small enough to be delivered via a modern bomber.  Frisch and Peierls’ research jump-started Britain’s atomic program, the MAUD Committee, which in turn pressed Washington to create a committee of their own.  The S-1 Committee was born in October of 1941, but with little urgency to their work. 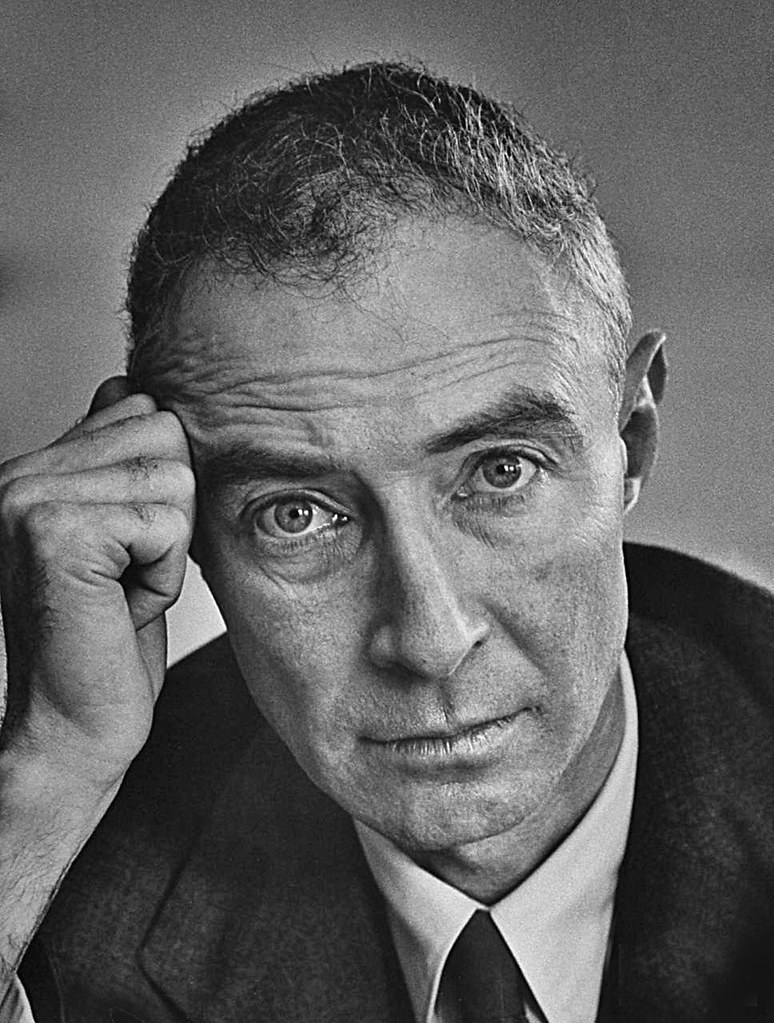 J. Robert Oppenheimer – perhaps the scientist most publicly linked to the Atom Bomb, Oppenheimer’s reaction to Trinity has been seared into history: “Now I am become Death, the destroyer of worlds”

Pearl Harbor immediately changed that.  By the time the S-1 Committee held their first formal meeting in December of 1941, the United States was at war with both Japan and Germany.  Proposals for development worth millions of dollars were expedited within weeks, not months.  20 different facilities, scattered across the U.S. and Canada, would house various aspects of the program.  The Committee’s initial modest home, on the 18th floor at 270 Broadway Ave in New York, would foster the program’s eventual name – the Manhattan Project.

America’s atomic research project had a name and ample funding.  What it didn’t have was a staff.

Despite the fears of Nazi Germany obtaining an atomic weapon first, the Western Allies’ priorities seemed more about military secrets than about beating the Nazis to a bomb. Jumbo – the nickname for the containment unit for the Gadget.  Amazing enough, fragments of Jumbo actually survived the blast

Recruitment for the Manhattan Project proved difficult as the military repeatedly refused key scientists.  Einstein was ruled out, despite his fame and role in advocating for the project, due to his pacifist leanings (Einstein would later say that if he knew the Nazis would never develop a bomb, he would never have pressed the U.S. to create it’s own).  J. Robert Oppenheimer was originally disqualified as well, with concerns that his relationships to known Communists would endanger the security of the project.

The military’s paranoia of foreign spies defined large parts of the program.  Every equipment failure or mistake was initially deemed to be intentional – the March 10th, 1945 bombing of the Hanford Site in Washington State by a Japanese Fu-go bomb caused momentary panic that the security of the operation had been jeopardized.  Such fears weren’t unfounded.  Oppenheimer himself would admit that he was approached by a fellow Berkeley professor in hopes Oppenheimer would be willing to sell information on the Manhattan Project to the Soviets.  Spies like Harry Gold, David Greenglass and Ethel and Julius Rosenberg would be discovered – others would remain undetected for even decades after the Manhattan Project had ceased to exist. The Manhattan Project staff inspecting where the testing site (the oil derrick-like picture from earlier) once stood.  The white shoes are actually plastic covers to prevent fallout from sticking to the soles of their shoes

Yet foreign espionage was a distant second concern to the lack of inter-allied cooperation.  The British were unhelpful in the Manhattan Project’s earliest days.  Unwilling to share their research or scientists, London believed they could develop a bomb without American assistance.  Despite having already spent $500 million pounds on their own project, those actually involved with MAUD Committee knew they were being lapsed by American efforts.  War-torn Britain simply lacked the resources to complete a bomb on their own.  Only after repeated lobbying efforts, and several negotiated treaties, did the Manhattan Project represent the best and brightest the Western Allies had to offer in creating an atomic bomb.

By the spring of 1945, it seemed likely that the Manhattan Project would succeed, and the conversation shifted from whether an atomic bomb could be created to whether it should be used.

The military liaisons of the Manhattan Project had no qualms about dropping such a weapon on the Japanese.  After all, the March 9th, 1945 fire-bombing of Tokyo had consumed 16 square miles of the Japanese capital, and up to 130,000 of its civilians without any debate as to the effectiveness or morality of the campaign.  But the scientific (and political) members of the Manhattan Project were far from unanimous.  To decide the issue, Pres. Harry Truman created the Interim Committee – an eight member panel of political, scientific, and civilian advisers whose task would be to debate the future of the atomic bomb. 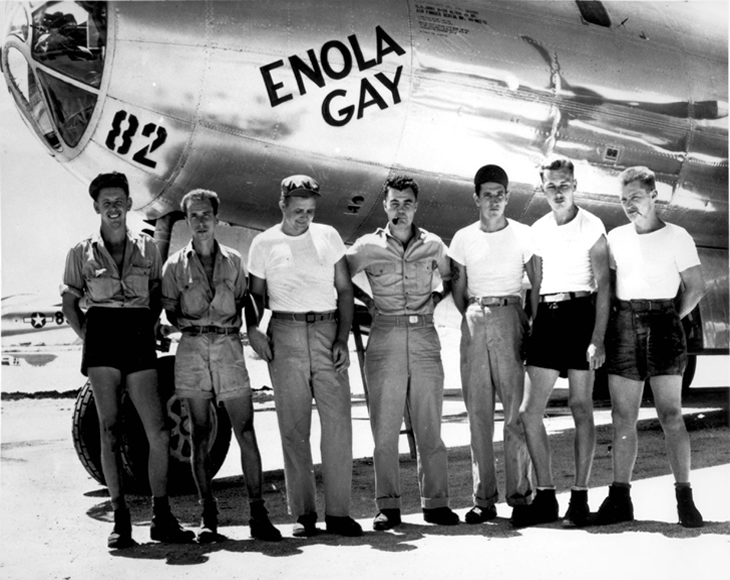 The Enola Gay crew – the plane had been specially chosen for the atomic bomb mission while it was still on the assembly line.  The name came from the pilot’s mother, Enola Gay Tibbets

It was hardly much of a debate.  With the fierce fighting of Iwo Jima and Okinawa freshly in the Committee’s mind, and with casualty estimates for an invasion of Japan suggesting 1.7 million to perhaps as many as 4 million American casualties, including anywhere from 400,000 to 800,000 dead, anything that might shorten the war was viewed as heaven-sent.  Only Ralph Baird, a former Chicago financier and Truman’s personal representative on the committee, opposed dropping the bomb, preferring to at least give the Japanese a warning of the bomb’s destructive power.

Yet even in dissent, there was a common theme – Japan was likely looking for a rationale to end the war.  The use of the atomic bomb, or the threat of such a weapon, might provide the excuse necessary to accept the Allies’ demands of unconditional surrender.  Without such an excuse, either the Japanese would need to endure a bloody invasion and occupation or the Allies would have to accept a negotiated truce.

All parties agreed on one thing – the bomb could end the war. The components for the first atomic bomb were already leaving the United States when the Trinity test occurred on July 16th, 1945.  The USS Indianapolis left port the same day from San Francisco en route to Tinian in the Pacific where the bomb, “Little Boy”, would be assembled and loaded into a bomber.

The only remaining question was where the bomb would be dropped.  A list of potential targeted cities that had yet to sustain significant conventional bombing damage was produced.  Kokura, Hiroshima, Niigata and Kyoto had all escaped the wrath of American airpower thus far.  Secretary of War Henry L. Stimson interjected that Kyoto, the historic capital of Japan for nearly 1,000 years, should be spared as the destruction of a city with such historic connotations would probably only deepen Japan’s commitment to fight.  The city was taken off the list.

One city on the list appeared to completely fit the criteria.  It was home to the headquarters of the 2nd General Army and a major military port city.  It had barely been touched by the U.S. air campaign, and thus could provide an accurate assessment of the bomb’s destructive capacities.  Few Americans had likely ever heard of the city of Hiroshima.  Within weeks, it would be remembered by the entire world.