At Saturday’s Cinco De Mayo event in Saint Paul, the Fourth CD Republican Party had a total of about twenty people working at their booth, on Cesar Chavez Boulevard just east of Robert Street.  And that was just workers, not counting candidates.

And here was the DFL booth: 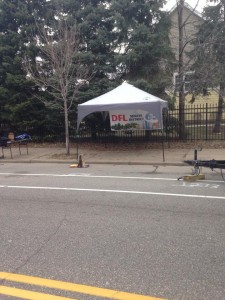 There were three people there, when there was anyone in the booth at all.

4th CD chair Jim Carson notes “Never saw a candidate nor an office holder [in the DFL booth.  The GOP booth] had MANY candidates and several legislators, a couple of whom (Hall and Pratt) are not running for statewide office. At one point, we easily had twenty people in our 10×20 booth. It was a madhouse.”

But it was a great event, and a great step forward.

And I gotta ask all you Latino voters on the West Side (and everywhere else in the Metro) – how does it feel being taken for granted like that?

3 thoughts on “Taken For Granted”