Jon Stewart has his moments – but I’ve never, not once, thought the “Colbert Report” was funny.

I know – he’s basically satirizing Bill O’Reilly, and that’s something that desperately needs to be done well.  Colbert isn’t it.

Yesterday, Colbert got into trouble for a “racist” shot at Asian-Americans, exhaustively documented at “The Twitchy“. 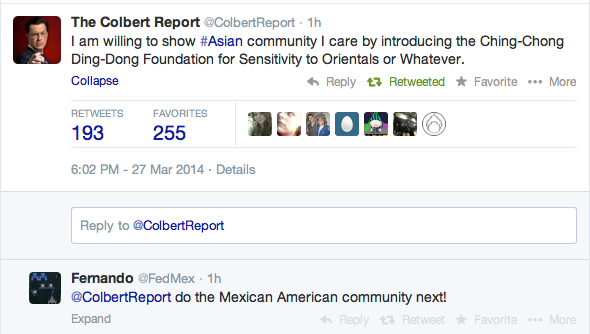 The worst part is that he and (worst of all) his defenders will say “It wasn’t really Colbert! He was acting the way a conservative host on Faux News, har di har, would act!”.

Except that Colbert and Ryan Winker and Maxine Waters do act that way.  And it’s happening more and more lately – to the point that the lefty noise machine is spending more and more time digging back to find objectionable japes on the right.  The other day, some lefty bobblehead on Twitter tried to tie gun owners to a remark Ted Nugent made…

Sorry, guys.  After you’ve dealt with Ryan WInkler in 2013, we’ll talk about Ted Nugent back during the George HW Bush administration.