The telegram had been sent in haste, but time was of the essence at 4:23pm on August 1st, 1914.  From London, German ambassador Karl Max, the Prince of Lichnowsky, had sent to Berlin word that Britain would take steps to guarantee French neutrality in a conflict that had developed a momentum of it’s own.  The French, eager to diffuse the situation, had informed the Russians that they viewed their treaty as merely defensive, trying to halt the planned Russian mobilization that had spooked Germany into a mobilization of her own.  French Premier René Viviani went so far as to move French troops 60 miles away from the French/German border as a sign of goodwill.

Kaiser Wilhelm II gleefully accepted Britain’s terms.  Perhaps the war could be avoided – or at least the conflict would be a short one against Russia until either Austria was in Belgrade, the Serbs surrendered, or Russia realized the need to demobilize.  Wilhelm II quickly told his General Staff, led by Helmuth von Moltke to cancel the execution of the Schlieffen Plan and an attack on France.  Von Moltke was taken aback.  German troops had already started invading Luxembourg – the first steps towards invading Belgium and then France.  It was simply too late to stop.

The Great War had begun.

Kaiser Roll (over): Wilhelm vacillated between supporting his Austrian ally and reining them in over Serbia. His mixed signals and general indecision gave his ally a “blank cheque” while suggesting Germany had no stomach for a fight to their opponents. It was a deadly combination

The war had technically already started on July 28th.  After more than a month of threats and ultimatums, the Austro-Hungarian Empire finally declared war on Serbia over the assassination of the heir to Crown, Archduke Franz Ferdinand.  Much like the run-up to the larger conflict, the declaration of war between Austria-Hungary and Serbia was a diplomatic nightmare – one that had come promisingly close to never happening.

Despite having trained and armed the Black Hand terrorists who had committed the act, Serbia was unsure whether to claim they warned Austria of the assassination plot or that they knew nothing of the conspiracy.  So they did both.  The Serbian ambassadors to France and Russia claimed they warned Austria, but that the Empire didn’t listen.  The Serbian Prime Minister, who had been told of the assassination group’s entry into Bosnia, contradicted his ambassadors and denied any knowledge.

Chancellor Theobald von Bethmann-Hollweg: more than any other figure, Bethmann-Hollweg is responsible for World War I. His acts crossed the line into treason in order to force a war against France and Russia

The extent of the plot became known thanks to Muhamed Mehmedbašić (remember him?).  After Ferdinand’s murder, Mehmedbašić fled to Montenegro, where he was prompted arrested and spilled every bean he could.  He spoke of Dragutin Dimitrijević, the member of the Serbian General Staff who led the Black Hand; his training, his co-conspirators – everything.  But before Mehmedbašić could be sent to Austria (as they requested), he escaped back to Serbia.  Many believed the local authorities aided his disappearance.

Across Europe, it became clear that Austria would act harshly against Serbia.  A sovereign government had assassinated a ruler of another sovereign government – such an act could not go unpunished.  Serbia, since the nationalist coup against the monarchy, had become a rogue state.  Either Serbia had to cleanse itself of the nationalist elements that led the assassination or Serbia itself would have to be removed from the map.  Few believed Serbia would act against its own nationalists.  Even fewer, it seemed, wanted to avoid a war.

Russia mobilizes for war. Germany felt it could not afford to fight a two-front war and had to defeat their opponents quickly.

Leading the “War Party” in Europe was Germany.  Kaiser Wilhelm II declared that he was eagar for “settling accounts with Serbia”.  “We must finish with the Serbs, quickly. Now or never!”  The German ambassador to Austria told Vienna that “Germany would support the Monarchy through thick and thin, whatever action it decided to take against Serbia. The sooner Austria-Hungary struck, the better”.  Count Moltke, the Chief of the German General Staff, underscored the German government’s opinion that “Austria must beat the Serbs”.

Wilhelm’s (and the rest of Germany’s) belligerent statements were part of a broader German strategy.  However, Kaiser Wilhelm’s goals, and the goals of his General Staff, were widely apart.  Wilhelm saw the opportunity to crush a rogue state, freeing up an ally from worries about their southern borders, and lessen Russian influence in Europe, as Russia was Serbia’s chief ally.  The German General Staff saw an opportunity for a broader European war .  The General Staff believed passionately in the Schlieffen Plan – a model invasion that would recreate the brief Franco-Prussian War of 1870 that led to the creation of the German state.  In 40 days, the General Staff believed they could crush France, then turn their forces against Russia and smite the Tsar.  Within weeks, Germany would have settled the question of European hegemony for the next century.

For these Serbian troops, the war had already begun on July 28th

Both strategies now rested upon Austria quickly declaring war against Serbia and marching through Belgrade before the Russians or French had mobilized.  Austria took the declarations of German support as a “blank cheque” that could be cashed at any time.  Instead of immediately attacking Serbia, a move that would have surprised no one, Austria dragged its feet.

By July 23rd, the Austrians had decided on a course of action…a lengthy ultimatum against Serbia.  The document was tantamount to an unconditional surrender.  Serbia would remove from power any officials the Austrian government wished to target.  They would dissolve several nationalist groups.  All propaganda the Austrians identified would be removed from schools and government buildings, and the creators prosecuted.  In effect, Austria would dictate Serbia’s foreign policy in the Balkans – and the Serbs had 48 hours to reply. 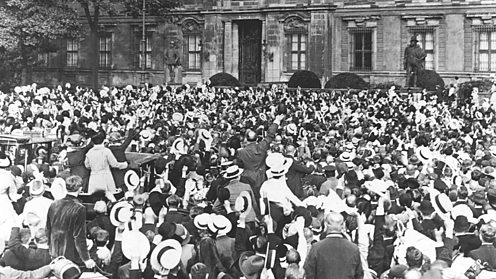 That night, the Serbian Regent, Crown Prince Alexander, visited the Russian delegation that had arrived in Belgrade to try and help avoid a war.  Alexander was indignant at the Duel Alliance’s demands, stating that “compliance [is]…as an absolute impossibility for a state which had the slightest regard for its dignity”.  Alexander assumed the Russians would support Serbia’s noncompliance.  They did not.  Tsar Nicholas II, unwilling to go to war over Serbia murdering another monarch, told the Serbs to accept the ultimatum.  Perhaps agreeing to Austria’s demands would soften the implementation of them.

With what they presumed were only hours left to go before Austria’s deadline, Serbia accepted the ultimatum on the night of July 24th.  Reading Serbia’s response, Wilhelm II commented: “But that eliminates any reason for war,” while noting “the few reservations which Serbia has made with respect to certain points can in my opinion surely be cleared up by negotiation.”  Wilhelm made it clear to the Austrians to accept the proposal; at worst, occupy Belgade until the deal was finalized.  The reaction in most capitals had been the same.  Serbia had swallowed a bitter pill, but the “July Crisis”, as it was known, was over.

Those in the German government who wanted a war would get their war – whether the Kaiser agreed to it or not.  German Chancellor Theobald von Bethmann-Hollweg, the civilian leader of the pro-war elements of the government, informed the German ambassador to Austria: “You must most carefully avoid giving any impression that we want to hold Austria back.  We are concerned only to find a modus to enable the realization of Austria-Hungary’s aim without at the same time unleashing a world war, and should this after all prove unavoidable, to improve as far as possible the conditions under which it is to be waged.” [Emphasis added]  Wilhelm’s message to Vienna had all references about not going to war omitted.  In no uncertain terms, Bethmann-Hollweg committed treason in order to start a world war.  His eventual punishment?  None.  He would serve as Chancellor until 1917.

By 11:00am on July 28th, Austria-Hungary had declared war on Serbia, and Austrian river gunboats had shelled Belgrade.  Perhaps the war could be fought quickly, Wilhelm still believed.  Instead, the Austrians informed him and the General Staff that offensive operations were out of the question until August 12th.  That meant the French and Russians had weeks to mobilize.

Even as shots were being fired, various diplomats and leaders were trying to arrange for a solution.  Wilhelm and Tsar Nicholas engaged in communications, each beseeching the other to rein in their ally.  The German ambassador returned word to Berlin that Moscow had agreed to force Serbia to accept all Austrian demands, without negotiations.  When the news was presented to Chancellor Bethmann-Hollweg, he rejected them out of hand.  Germany was already on it’s way towards getting his war.  No talks or treaties would stop him.

A crowd in Munich reacts to the announcement of the declaration of war against Russia. The enthused young man with the mustache? Adolf Hitler

What Bethmann-Hollweg had not factored into his decision was the prospect of Britain entering the war.  Bethmann-Hollweg assumed either Britain would remain neutral (why fight for their once-sworn enemy France or for their Far East colonial rival Russia?) or would take so long to mobilize that she wouldn’t be a factor.  Instead, the British tried to intervene diplomatically – by proposing the same peace plan as Wilhelm, to “stop” the invasion by limiting to a temporary occupation of Belgrade.

French mounted troops made their way to the front; the first of many. 4.2 million would return wounded over the next four years. Nearly 1.4 million wouldn’t come back at all.

The dye had been cast.  All the major powers were mobilizing their forces.  Russia had mobilized troops on the Austrian border to try and stop the Austrian invasion of Serbia.  The German had started mobilizing to try and stop the Russians from mobilizing.  The French had mobilized because the Germans were mobilizing and the German rail system could just as easily move troops east to west.  The British were mobilizing, to the extent the British military system resembled the rest of Europe (which it didn’t, being more dependent on professionals than draftees), because Germany was preparing on the French border due to the French mobilization.  One nation would have to blink and de-mobilize, leaving them open to be rapidly invaded if the surrounding nations had no intention to disarm.  Thus no one did.  Even as Wilhelm came to his General Staff to tell them, as we began our story, to attack Russia and not France, it was at the point of no return.

All that was left was Britain’s response.  Bethmann-Hollweg felt assured Britain would never go to war.  Even Kaiser Wilhelm II believed his cousin, George V, wouldn’t allow his nation to attack their old ally.  But British public opinion was firmly behind defending the rights of a smaller nation like Belgium.  Even as Bethmann-Hollweg dined with the British ambassador, he could not believe Britain would enter a general European war over such minor concerns.  By 7pm on the night of August 4th, 1914, Britain had joined the conflict.  The actors had assembled, and the play was about to start.

All parties believed the war would be short – a series of rapid movements and a few sharp battles.  None anticipated the carnage that was about to begin, or for most of the rulers who had so eagerly sought out a war, that their empires were about to disappear.

12 thoughts on “Scraps of Paper”