By the thousands they tumbled off their landing crafts.  Men, trucks, guns – 36,000 battle-hardened Allied troops supported by 3,200 vehicles and all delivered with nary a response from the Wehrmacht.  On the beaches of the fishing town of Anzio on January 22nd, it seemed that the Allied advance in Italy had finally achieved with Operation Shingle the breakthrough they had been searching for.

Instead, Anzio would become emblematic of the entire Italian campaign – poor planning, poor leadership, harsh terrain and heavy casualties over the course of a grueling near 6-month battle. S**t on a Shingle: despite what the pillowing smoke might suggest, the initial landings for Operation Shingle were essentially unopposed. 36,000 Allied soldiers landed at Anzio in one day, for the loss of only a little more than 100 men.  It would get much worse starting the next day.

Despite Italy’s formal switch to the Allied side in September of 1943, most the country’s territory remained in German hands.  Allied leadership, in particular U.S. 5th Army Gen. Mark Clark, had assumed that Germany would retreat to northern Italy, relinquishing most of the southern and central regions of the country.  Doing so would shorten German supply lines and allow for a greater concentration of forces.  But for Field Marshal Albert Kesselring, commander of German forces in Italy, doing so would also surrender mountainous, and easily defended, terrain.  A series of defensive fortifications, known collectively as the Gustav or Winter Line, stretching from Naples to Rome, were hastily erected.  The Allied occupation of Italy suddenly became a daunting affair.

Available Allied troops were few and far between.  As men and material were being sent to England in preparation for what would become the Normandy landings, U.S. and British commanders were being asked to attack rugged German positions with numerically equal (or sometimes inferior) forces.  Battles like Monte Cassino swallowed troops by the hundreds of thousands (250,000 on the Allied side alone from January to May of 1944) for little, if any, territorial gain.  The Allies had to find someway behind the German front.

American troops take cover against incoming German artillery. The Allied advance at Anzio, designed to be rapid, proved as slow and costly as the rest of the Italian campaign.

For Winston Churchill, the path behind Gustav and to Rome was via the town of Anzio.  It was not an entirely original concept.  The commander of the Allied armies in Italy, British General Harold Alexander, had proposed sending 5 divisions behind enemy lines, but he could not afford to take men away from Monte Cassino.  Nevertheless, Churchill badgered his generals, going so far as to accuse them of only “drawing pay and eating rations.”  Alexander’s concept was reintroduced and reduced to one division with the hopes that at least the move would draw away German resources.  The British believed success at Anzio could capture Rome and by-pass the entire Gustav Line.  The Americans believed it was a distraction at best; a suicide mission at worst.

If the Allies were confused as to the objective of Operation Shingle, their choice of landing ground didn’t make the mission any easier.  The Pontine Fields were flat, open ground flanked by mountains – easy pickings if the Germans held the high ground.  Worse, up until the 1930s, the Pontine Fields had been the Pontine Marshes.  Mussolini, desperate to show the achievements of fascism, had the marshes drained with a series of pumps in order to farm the land.  The Allies were landing in territory that could be flooded by water and enemy artillery with too few men for the job.  American Gen. John P. Lucas, the man assigned to Anzio, summed up his task grimly: “They will end up putting me ashore with inadequate forces and get me in a serious jam… Then, who will get the blame?”

Gen. John P. Lucas: the general in charge of Operation Shingle. Lucas never believed in Shingle, knowing he was asked to do with half a force what a full force had not accomplished. Nevertheless, he took all the blame.

Despite the long odds against Shingle working, at first it seemed as though the Allied plan might succeed.

Lucas’ men made it 5 miles in-land on the first day, with little German opposition.   In fact, the timing seemingly couldn’t have been worse for the Germans.  Kesselring wasn’t surprised, he had assumed the Allies would attempt an amphibious invasion to get around his defenses, but he had already dispatched his reserves to the Gustav Line.  For a moment, just a moment, Kesselring prepared to abandon his positions and get north of Rome – a massive retreat.  He couldn’t afford the Allies getting behind his communications and supply lines.  The Allies had gambled and looked like they would win big. 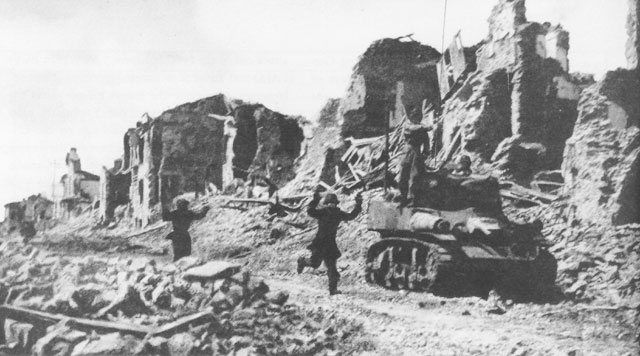 Victory at Cisterna: one of the hardest battles of the Anzio campaign was initially a major defeat. The US 1st & 3rd Ranger Battalions squared off against the Hermann Göring division. Both Battalions were effectively destroyed.

Lucas knew none of this.  Fearful of being overrun, he bottled up his forces on the beachhead and awaited the German counterattack.  By January 29th, with the arrival of two more divisions (so much for the one division plan), Lucas now had 69,000 men ready to start an advance.  Churchill was despondent.  “I had hoped we were hurling a wildcat into the shore,” he said, “but all we got was a stranded whale.”

The lost time had been fatal to the Allies’ efforts.  Now facing them were 71,500 German troops in defensive positions.  The U.S. 3rd Division’s advance out of Anzio at Cisterna was a debacle and showed what any further advance would cost in Allied lives.  The 1st and 3rd Ranger Battalions found themselves cut off from the 3rd Division and against the vaulted Hermann Göring Division.  Not content to force the American Rangers to surrender, the German troops marched American POWs directly at the Allied line, shooting or bayoneting prisoners for every shot taken at their German captors.  This terror tactic was devastating effective.  Of the 767 men of the 1st and 3rd Ranger Battalions, 6 survived being killed or captured.

Only 4,500 Axis soldiers, Germans & Italians, were captured during the Battle of Anzio. Most escaped to fight another day.

By start of February, German forces outnumbered Allied troops at Anzio.  While the Anzio front had expanded, Krupp K5 railway guns, known as “Anzio Annie,” lobbed 560 pound artillery shells at the beachhead and German torpedo boats harassed landing craft.  Inch by inch, mile by mile, the Germans were turning the Allies back.  Anzio was increasingly looking like it might become the Gallipoli of the Second World War – itself another Churchill-inspired invasion that failed in the Great War.  By the middle of February, the last Allied defensive line at Anzio was under attack and Gen John P. Lucas, as he had predicted, had been blamed and removed from command.

Like he had so many times before, Adolf Hitler appeared to snatch defeat from the jaws of victory.  Kesselring had been given a largely free hand to make tactical decisions about the Italian front and that trust had paid dividends at Anzio.  But his troops were exhausted.  An offensive on Feb 16th, designed to break the final Allied line, had failed by the thinnest of margins.  20,000 Germans had been killed or wounded thus far, and Kesslering wisely knew he had at least achieved his goal of bottling up the Allies.  Hitler ordered another attack, producing only more casualties for Kesslering’s weakening 14th Army and ruling out future offensive operations.  The result underscored what Anzio had become – a stalemate.

A Italian woman looking for food: the scale of civilian death at Anzio is unknown, but an estimated 153,000 Italian civilians died during the fighting on their soil.

What had started as a one division operation eventually mutated into a 10-division, 150,000 man operation by May of 1944.  Men needed for other fronts, including elsewhere in Italy, found themselves trapped on the tiny Anzio beachhead.  Only after bleeding the German Army on multiple fronts did the Allies finally achieve their breakthrough, capturing Rome on June 4th, 1944.  Even that accomplishment found a way to become tainted, as not only was it overshadowed by the events of June 6th, but the decision to hold, in essence, a victory parade in the Italian capitol instead of pursuing the German 10th Army, would have bloody consequences.  Of the over 300,000 Allied casualties in the Italian campaign, more than half would come after the fall of Rome.

4 thoughts on “The Stranded Whale”