I went to the Capitol last night for the House Public Safety Finance Committee hearings on Michael Paymar’s “HF 237”, better known as “The Bad Gun Bill”, a bill rife with nannystate abuse-fodder.

I got to the State Office Building around 5:15, and waited about an hour for the doors to the hearing room to open.

And watched as the crowds started coming in and getting their tickets from one of the pages.

There was the pro-Second-Amendment crowd down one hall: 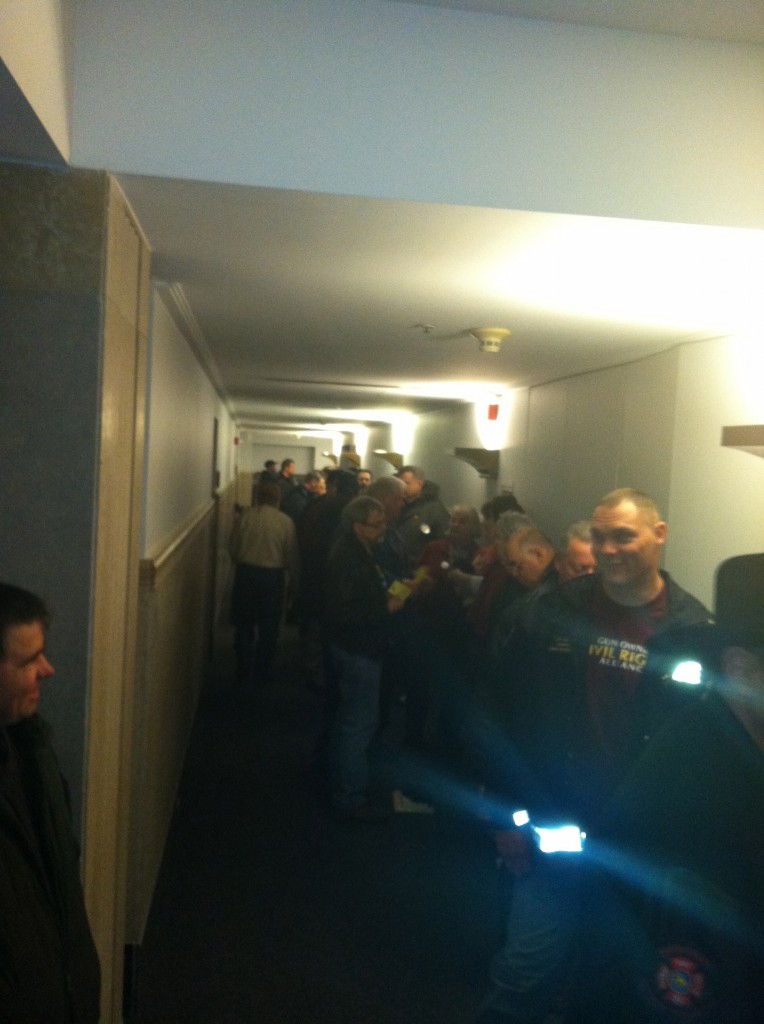 The pro-Second-Amendment crowd actually grew from this.

And the pro-orc, pro-nannystate, gun-grabber faction down the other way. 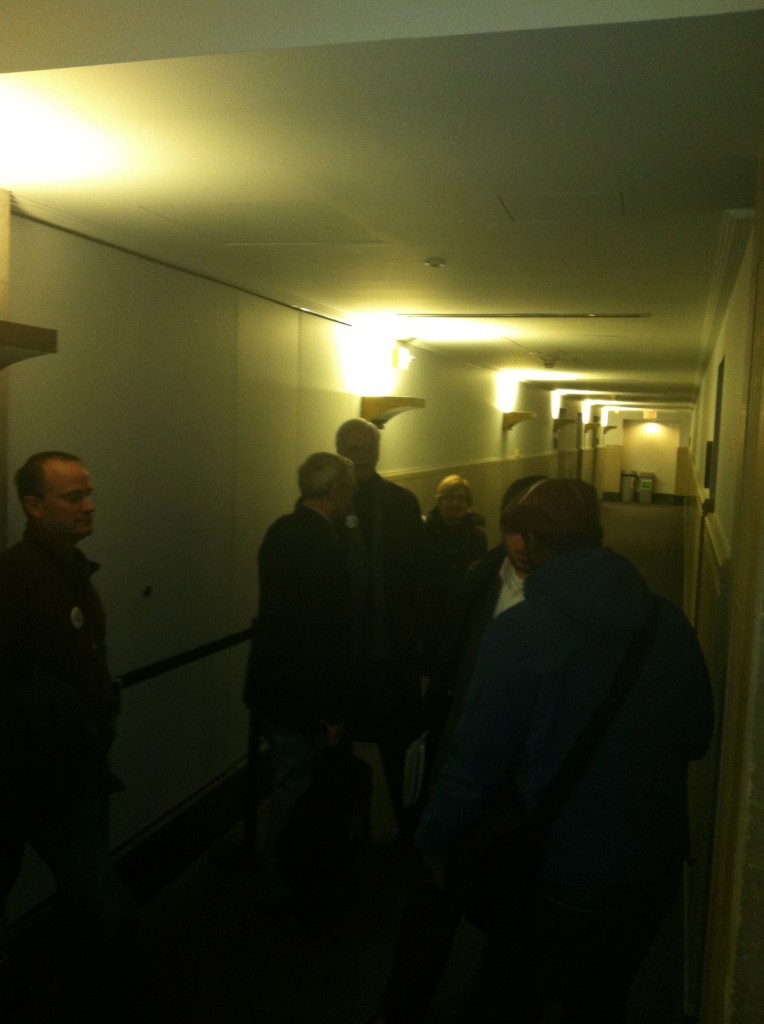 And the DFL’s public relations people were there, too: 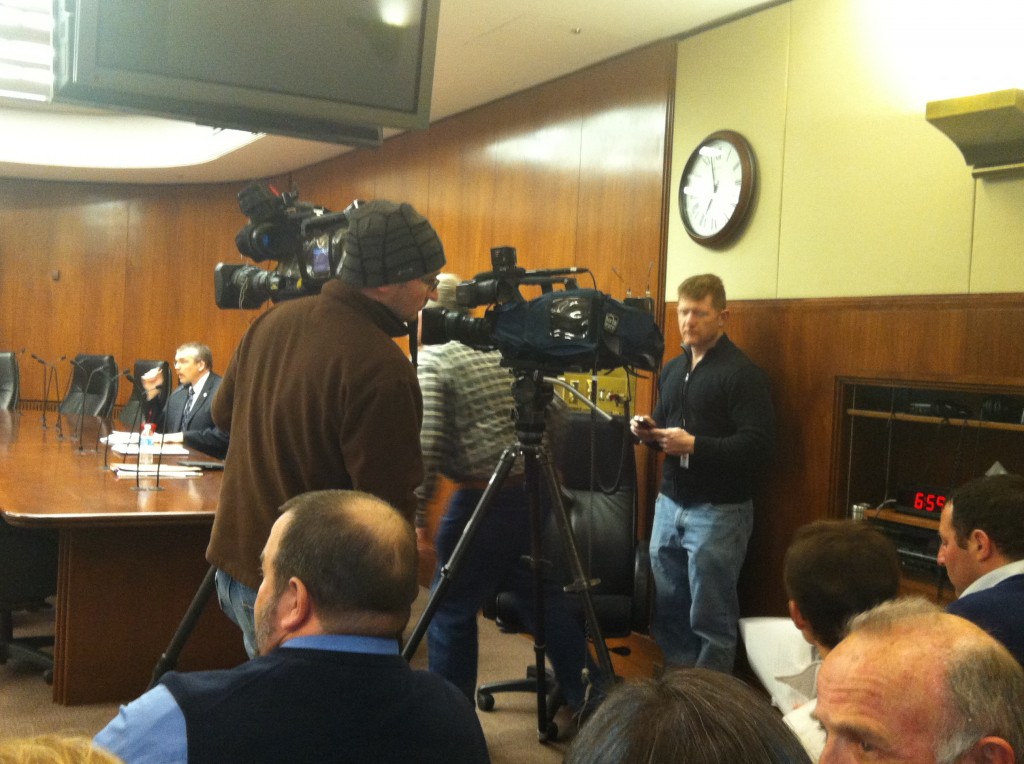 Media people – seven of ’em – actually outnumbered Paymar supporters for a good chunk of the evening.

Finally, we all got to come into the hearing room, where the crowd – easily 95% against the Paymar bill, as usual – sat and waited some more.

Eventually – around the meeting’s scheduled 7PM start time – the Republican members of the committee came into the room and took their seats. 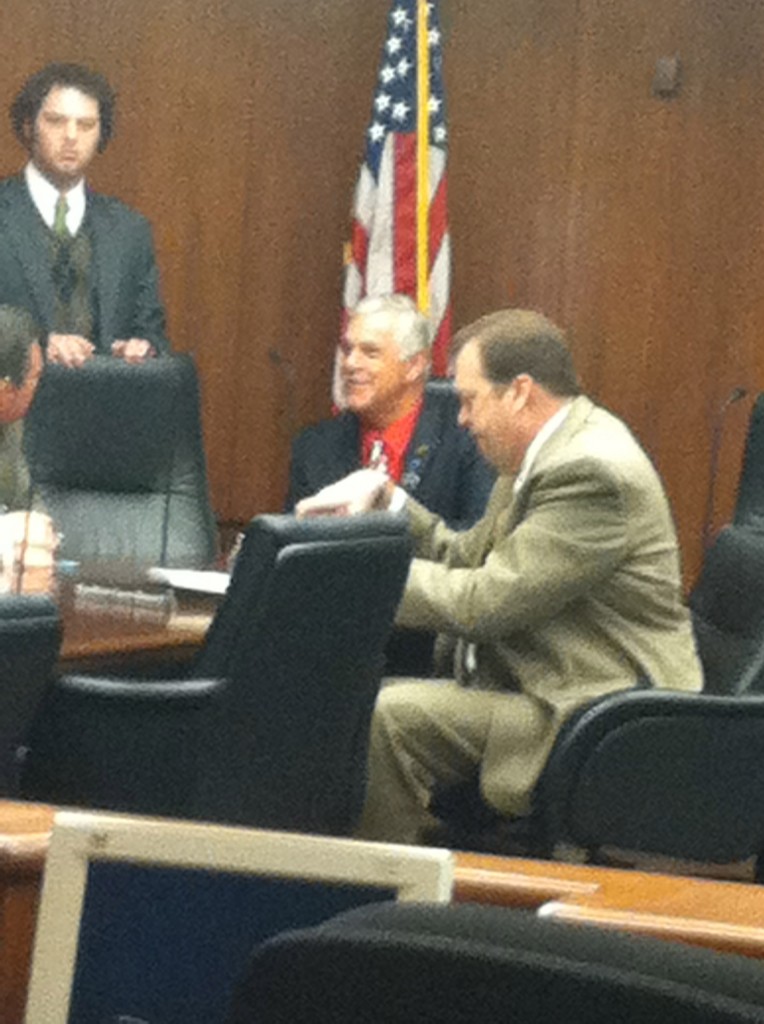 Rep. Cornish waiting for the DFL.

And we all waited. 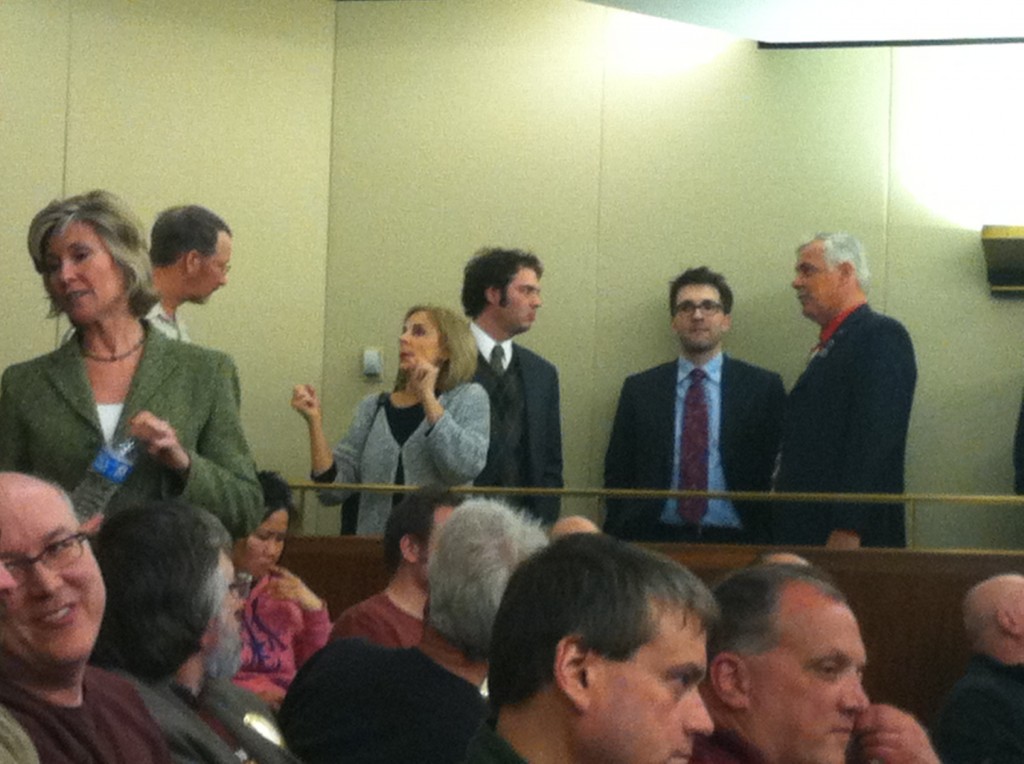 Rep. Kieffer (far left, green outfit) and Cornish (far right at back) killing time in the gallery, waiting for the DFL. And waiting. And waiting.

Rumors started flying.  The DFLers were in a locked room, being lectured by Shotgun Joe Biden via teleconference.  Or waterboarding Rep. Hilstrom, who has been Paymar’s most notable dissident within the DFL, having introduced “The Good Gun Bill” a few weeks back.  And one rumor, overheard from a conversation between a couple of antis, had it that Paymar didn’t have the votes to get the Bad Gun Bill out of committee.

And the 7PM start time slid on toward 8PM… 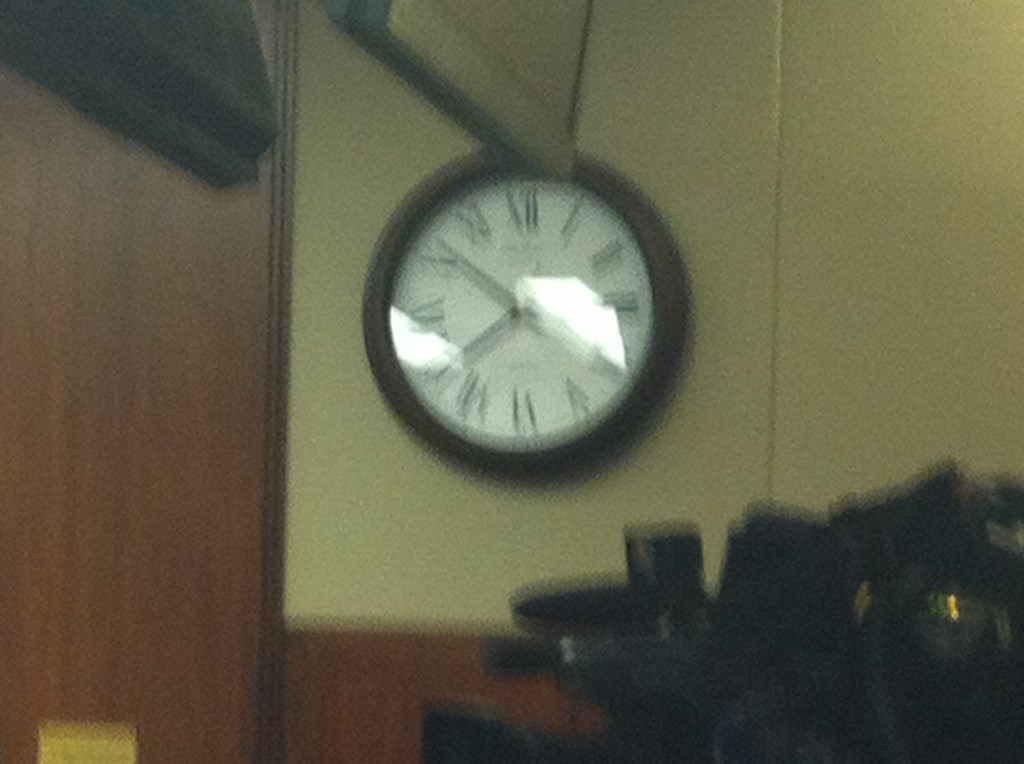 …and then well past.  Finally, Rep. Rosenthal, the committee’s #2 DFLer, walked around the crowd and told us that the meeting would start at 8:15.

Around then, the DFL members filed in.  Paymar hit the gavel, thanked everyone for showing up, announced the bill was laid over – on the table, no further action – and adjourned the meeting. 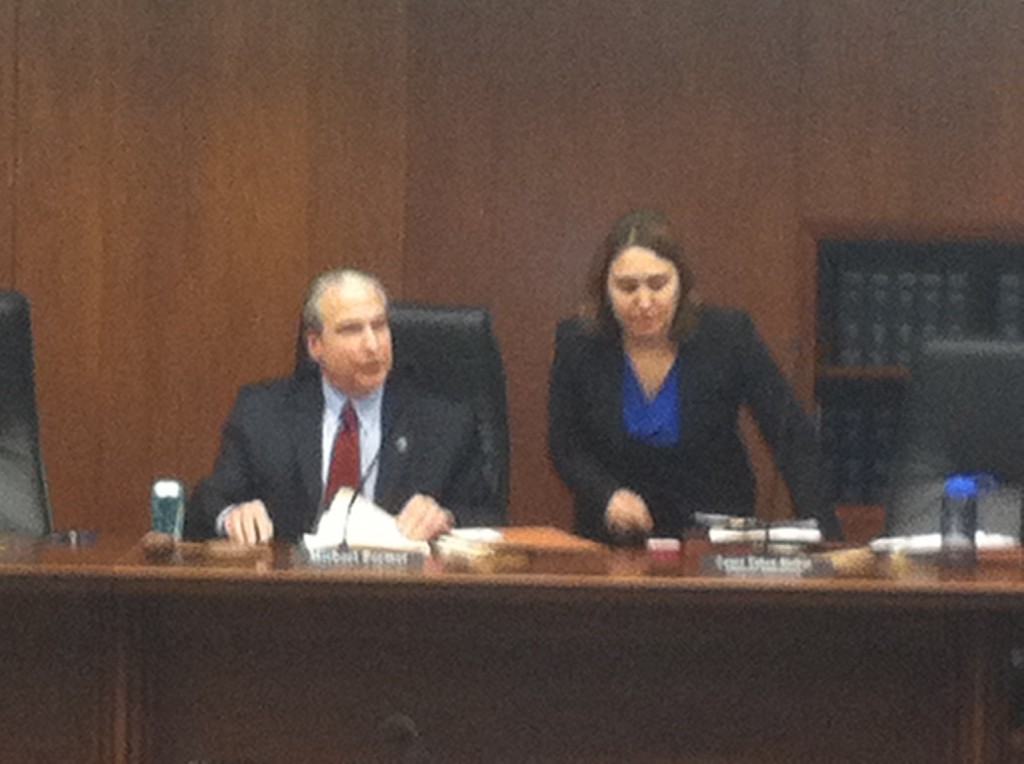 Paymar begins and ends the hearings.

As most of the reps scattered to the wind, the clutch of DFL PR and a few just-plain folks congregated at the front, around Representatives Paymar and Hilstrom. 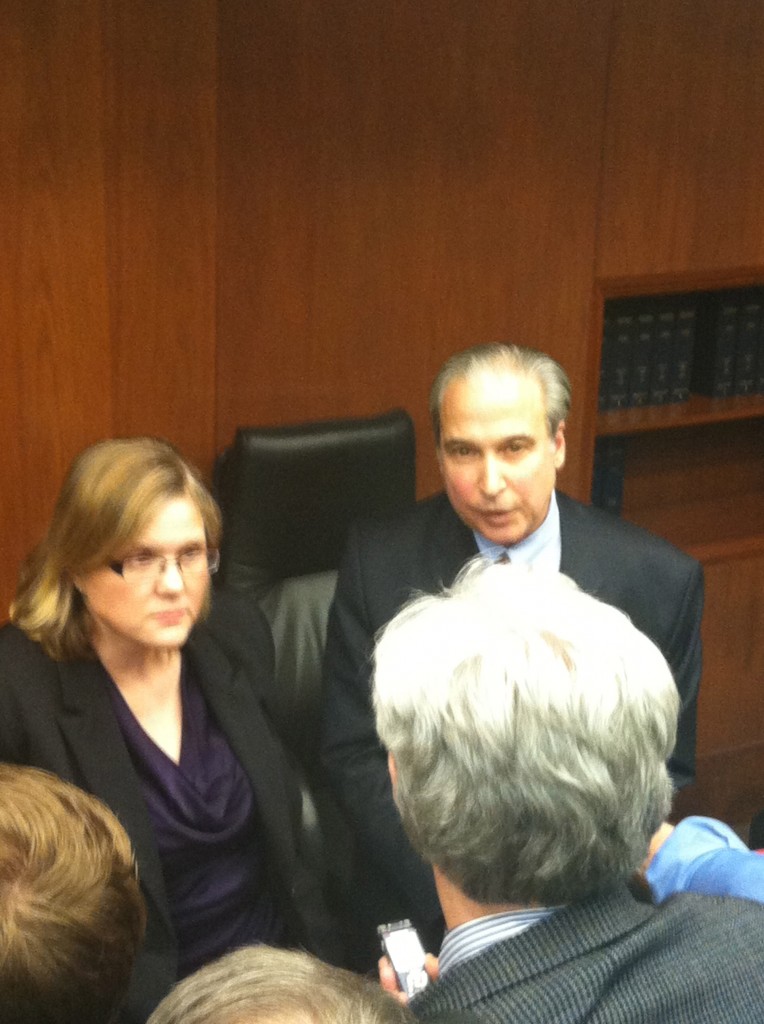 Hilstrom and Paymar, after the ten-second meeting.

Paymar was doing it best to put a positive spin on things – “I think we did something positive today” was one quote – but he was clearly dejected.  “I think both sides are disappointed…”

In terms of bills?  You’re going to hear a lot of chatter about this from both sides – the stuff you hear from GOCRA will be accurate, the stuff from “ProtectMN” will not – but it basically breaks out like this:

And that’s the bill that’s going to go to the floor for a straight up and down vote, and thence perhaps onward to the conference committee to gnosh it out with whatever the Senate passes, either Ron Latz’s “Stupid Gun Bill” (SF458) or Ortman’s companion to Hilstrom’s “Good Gun Bill”. 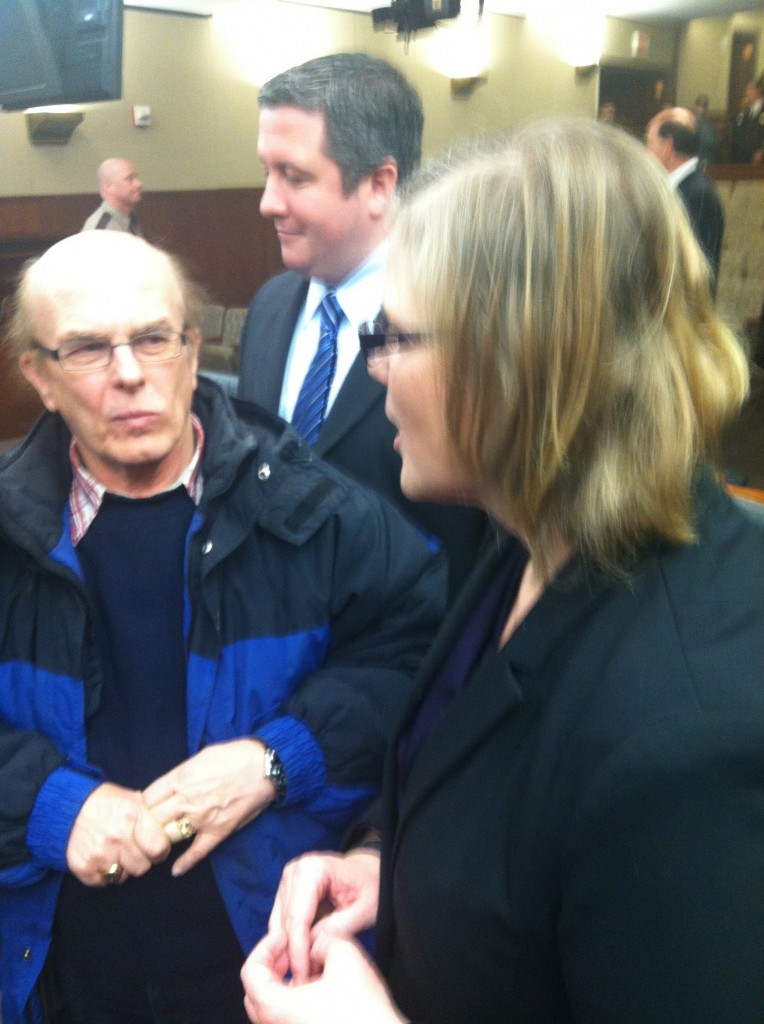 Professor Joe Olson – leader of GOCRA – having the first of many words with Rep. Hilstrom regarding the language in the “Prosecutor’s” – “Meh” – gun bill.

The big concession: a provision to require all transfers at gun shows to have a background check – meaning, in a practical sense, a Carry Permit or a Permit to Purchase.  And a gun show will mean, according to Hilstrom, any transfer in a public place.  The armory?  The Fairgrounds?  From the trunk of your car in the parking lot of the Dairy Queen on Broadway?  All of them are public places.  “But wait”, you say,  “it sounds like that last one is trying to get criminals to carry out background checks”.

True.  But it leaves private transfers alone – because they’re either scrupulously legal and there is no problem and adding a layer of bureaucracy to them merely bashes on the law-abiding citizen, or they’re utterly illegal and nobody involved will ever run a background check anyway, so what the hell is the point?

There were a few Second-Amendment people who walked out of the meeting feeling like the good guys lost one, or that there was some strange procedural hanky-panky going on that left us holding the bag.

Neither is true, and neither is false.  The Paymar bill, obnoxious and oppressive and repulsive as it was, is dead and gone.  Period.

As to the rest?  Yep, there’s work to be done.  GOCRA and the good guys will be duking it out to get the objectionable parts of the Lesch bill rewritten before it goes to the floor.  This will involve lots of time spent behind closed doors – and more phone calls and emails and, likely, time at the Capitol showing the flag before this is over.

Sorry.  Democracy’s a marathon, not a sprint.

Here are the takeaways:

So there you have it!

UPDATE:  Tony Cornish is not happy about last night at all.  From Facebook:

It Was A Tough Nite for Gun Owners

Last night after days of DFL Leadership Pressuring the Chair of the Judiciary, Debra Hilstrom, the gun control people finally got what they want: A promise to go after gun owners in private sales at gun shows. After promising us that she and Rep Ward would stand with us in a committee vote and kill HF 237, she finally succumbed to pressure from her party. HF 237 was about to come to a vote when all of a sudden it was relayed to us that she would stand now with the DFL Chair of the Public Safety Committee. They came into the committee room and laid HF 237 on the table, adjourned and then held a news conference where said they would work together to plug what they call the “gun show loophole” very soon. You and I know that it is not a “loophole” but rather a legitimate sale of guns at shows that was meant to be that way.

Naturally, this was a huge disappointment and a complete reversal of what she said would happen. Now you can see what sometimes happens in the ugly side of party politics and backroom deals. We are now left with a future fight, and that is to bring together the votes we need to kill this future measure on the Floor of the House of Representatives. While we don’t know for sure what this bad bill will bring, we are almost certain that they will try to “Dress up a Pig” by putting good measures with bad to try to make it look more attractive. What makes it tough, is that we really can no longer trust “vote counts” that we receive and will have to find a “margin” where we can be sure that we have enough votes to bring down this “nightmare in the making.”

So, now we forge ahead into an uncertain future, trying to protect gun owners from what we know is a “foot in the door” to possible registration and confiscation. Remember, just a short time ago they said they would never come after our long guns and this this session they proposed a bill that would not only lead to an eventual turn in to the State but also Law Enforcement being able to come to your door with random checks to make sure you were compliant. Everyone that that is sure these attempts will stop here and not result in registration or confiscation and that it is just “paranoia,” raise your hand. Stay tuned!!!!!

Marathon.  Not a sprint.

CORRECTION:  Ortman, not Hortman.  Grr.  It’s been a long day.