Is it a coincidence that the budget was called “Budget For A Better Minnesota?”

But the Governor released the budget at an 11AM press conference yesterday.

At 11:13, Carrie Lucking – the “Executive Director” of the “Alliance for a Better Minnesota”, one of the huddle of lefty non-profits via which liberal plutocrats and the unions launder millions of dollars and run the DFL’s entire messaging operation – tweeted: 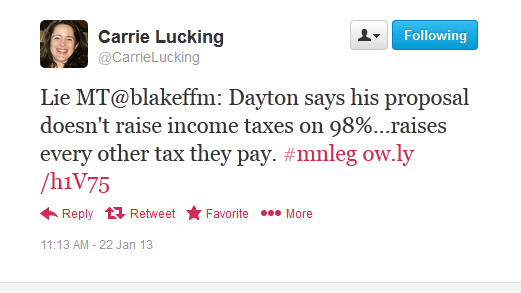 A flurry of conservatives on Twitter wondered last night – is that how Lucking got enough detail about the budget, 13 minutes after it was announced, to call a critic a “liar?”

I thought that showed too much faith in Governor Dayton.  I think it’s more likely ABM gave the budget to the Administration.

Either way – I need your help here.

Back in the 2000s, the media spun up a tempest in a teapot over Governor Pawlenty’s involvement with an outside group, and the potential impact that had on the Pawlenty Administration’s message and policies.   It passed quickly, because there was no there there.  But the media gave it its’ 15 minutes.

Does anyone remember the parties involved in that?  I only remember the dimmest possible outlines of the episode.

But compared with the collegial clubbiness between the Twin Cities media – especially the Strib and the MinnPost  – and the various political non-profits and advocacy groups, I think it’d be useful for comparison’s sake.

UPDATE:  I need to point out that the heavy lifting on Twitter was done by Dave Thul and Sheila Kihne.  They smelled the rat.  I just wrote about it.

2 thoughts on “One Big Happy Club!”